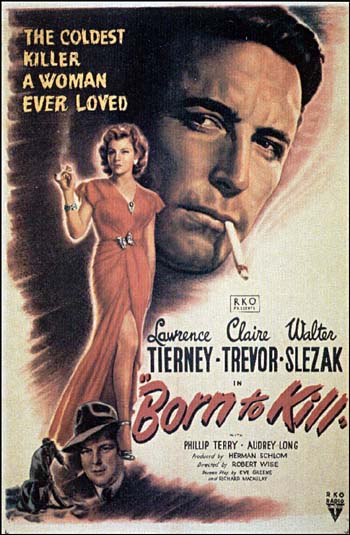 This was Tierney's first "A" picture, but because of his dangerous and volatile reputation, he never made another big film as a movie lead. [ [http://www.eddiemuller.com/tierney.html Muller, Eddie] . Web site. "The Big Leak: An Uneasy Evening with the Noir Legend," 1999. Last accessed: , .]

The scenes in prominently feature the . This bridge is used more often in film noir than the more famous , because it's easier to shoot with the city in the background.

Helen Brent () has just received a Reno divorce. That night, she discovers one of her neighbors, Laury Palmer, and a gentleman caller murdered in Palmer's home. The killer is her neighbor's other boyfriend, Sam Wilde (), an insanely jealous man who won't abide anyone "cutting in" on him. Helen discovers the bodies, but says nothing to the police; she's leaving town and doesn't want to be impeded. She meets Sam on the train, and she is instantly attracted to his self-confidence and brutality, but she is engaged to marry a wealthy boyfriend. Helen's foster sister () is also rich, and Sam soon shifts his attentions to her, marrying her for her money after a whirlwind romance. Neither Helen's engagement nor Sam's marriage is an impediment to their beginning an affair.

Meanwhile, back in Reno, the owner of the boarding house where Helen lived has hired a mercenary, verse-quoting detective, played by , to find out who killed Laury. The detective follows Sam's friend, Marty (), to San Francisco, and soon begins to make blackmailing overtures to Helen. Marty finds out who hired the detective and attempts to kill her, but Sam thinks he's trying to cut in on his action and kills him. Helen's rich boyfriend begins to see through her shell and breaks it off. Sam and Helen face off in a fatal confrontation as their schemes begin unraveling.

* as Helen Brent
* as Sam Wilde
* as Albert Arnett
* as Fred Grover
* as Georgia Staples
* as Marty Waterman
* as Laury Palmer
* as Mrs. Kraft
* as Grace
* Tony Barrett as Danny
* Grandon Rhodes as Inspector Wilson

In the commentary for the 2005 DVD release of "Born to Kill", film noir historian Eddie Muller suggests that the character of Laury Palmer--a party girl who spends most of the movie as a murder victim--may have been an inspiration for Laura Palmer in 's TV series "." [Muller, Eddie. Film Noir Classic Collection, Vol. 2, "Born to Kill, et al," Supplements, Warner Home Video, , .]

* Albert Arnett: "As you grow older, you'll discover that life is very much like coffee - the aroma is always better than the actuality."
* Marty Waterman: "You can't just go around killing people when the notion strikes you. It's just not feasible."