The Denver Pioneers are the sports teams of the University of Denver. They play in the National Collegiate Athletic Association (NCAA) Division I, with most teams participating in the Sun Belt Conference. The Western Athletic Conference will become Denver's primary sports conference on July 1, 2012.[1]

The University has been fielding athletic teams since 1867. DU's athletic teams are known as the Pioneers. In the early years of competition from the 1860s to the early 1920s, Denver had no official nickname, but sports writers of the day referred to Denver teams as the "Ministers" or "Fighting Parsons" in homage to the Methodist heritage of the school. Denver officially became the "Pioneers" in 1925, after the result of a student nickname contest, and that nickname has been in place ever since.

With over 200 All Americans, 28 NCAA Championships and 56 Olympians in its history, there is a long tradition of excellence in Pioneer sports. Today, DU operates a full NCAA Division I athletic program with a unique and successful mix of sports in and around the $85 million Daniel Ritchie Center for Sports and Wellness, which was completed in 2000. In 2008, Denver was 47th overall in the NACDA Director's Cup, which ranks NCAA programs on total athletic program achievement, and was first among NCAA D-I schools without football programs (D-I AAA). Sports Illustrated ranked the DU program 23rd in the nation in 2008 among all schools.

Denver is a currently a member of the Sun Belt Conference for Men's and Women's Basketball, Swimming, Tennis and Golf, as well as Women's Volleyball and Women's Soccer. In 2012, Denver will join the Western Athletic Conference in those sports, plus women's gymnastics. The other Denver teams play in various conferences in the sports that are not sponsored by the Sun Belt or the WAC. Men's Ice Hockey plays in the Western Collegiate Hockey Association, Men's Soccer and Women's Lacrosse play in the Mountain Pacific Sports Federation, Men's and Women's Skiing compete in the Rocky Mountain Intercollegiate Ski Association, while Men's Lacrosse plays in the ECAC. Women's Gymnastics currently competes as an Independent until 2012, when it will join the WAC.

Ice hockey is DU's flagship spectator sport, regularly selling out the 6,000 seat Magness Arena on campus, the showpiece of the Ritchie Center for Sports and Wellness (completed in 2000). DU's Hockey Program has been playing NCAA Division I hockey since 1949-50. Pioneer Hockey is one of the most successful hockey programs in the history of collegiate hockey. The Pioneers are ranked (with the University of North Dakota) second in all time NCAA National Hockey Championships with seven (1958, 1960, 1961, 1968, 1969, 2004, 2005) Only the University of Michigan (9) has more Championships. The Pioneers have appeared in 14 NCAA Frozen Four Championships. Since the creation of the Western Collegiate Hockey Association in 1959, the Pioneers have won 10 WCHA Regular Season Championships (now the recipients of the MacNaughton Cup) and 13 WCHA Playoff Championships (now the recipients of the Broadmoor Trophy). 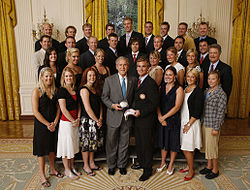 The Pioneers men's and women's ski teams are honored at the White House by President of the United States George W. Bush in June 2008 for their winning the 2008 National Collegiate Athletic Association team championship, their nineteenth skiing national title.

The women's Basketball team appeared in the 2001 NCAA Tournament.

The Men's Basketball team won the Sun Belt West Division in 2005 and appeared in the National Invitational Tournament (NIT) for the first time since the 1950s.

Denver's first athletic event was in a baseball game in 1867 (a loss to the Arapahone Baseball Club), a sport that was played at the varsity level until 1999 when DU returned to full NCAA D-I status. Football was once the most popular sport at Denver. The first DU football game was played in 1885 against Colorado College, which is believed to be the first intercollegiate football game played west of the Mississippi River. DU's Football highlights include appearances in the 1946 Sun Bowl, the 1947 Alamo Bowl and the 1951 Pineapple Bowl. The football team played in a 30,000 seat stadium that stood on campus from 1926 to 1971. However, the program was discontinued in 1961 for financial reasons.