The Appendix Vergiliana is a collection of poems traditionally ascribed as juvenilia of Virgil, although it is likely that all the pieces are in fact spurious. Many were considered works of Virgil in antiquity, but it seems that they comprise a diverse collection of minor poems by various authors from the 1st century CE. 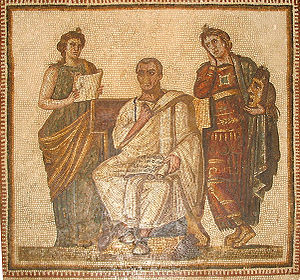 A mosaic of Virgil and two Muses. The mosaic, which dates from the 3rd Century AD, was discovered in the Hadrumetum in Sousse, Tunisia and is now on display in the Bardo Museum in Tunis, Tunisia.

Scholars are almost unanimous in considering the works of the Appendix spurious primarily on grounds of style, metrics, and vocabulary.[1] The collection as it is was probably formed in Late Antiquity, although ancient authors considered the Culex to be a youthful work of Virgil's[2] and the Ciris is ascribed to Virgil as early as Donatus' Vita[3] Quintilian quotes Catalepton 2 as the work of Virgil. The Elegiae in Maecenatem cannot possibly be by Virgil, as Maecenas died eleven years after Virgil in 8 BCE. The poems are all probably by different authors, except for the Lydia and Dirae which may have a common author, and have been given various, nebulous dates within the 1st century CE. The Culex and the Ciris are thought to have been composed under the emperor Tiberius.[4] Some of the poems may be attempts to pass works off under Virgil's name as pseudepigraphia, such as the Catalepton, while others seem to be independent works that were subsumed into the collection like the Ciris which is influenced more by the late Republican neoterics than Virgil. 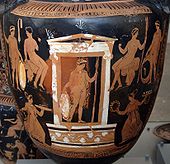 The Naiskos crater from Berlin showing scenes of the underworld.

This is a pastoral epyllion in 414 hexameters which evokes the world of Theocritus and employs epic conventions for comic effect in a parody. The poem opens with an address to the young Octavian, a promise of more poems, an invocation of Apollo, and a prayer for Octavian's success. The poet has a priamel in which he rejects the Battle of the Gods and Giants and historical epic. It is noon, and a poor but happy shepherd, who lacks the refinements of classical luxury, is tending his flocks when he sees a grove of trees, a locus amoenus, and lies down to rest. The mythical metamorphoses of the trees in the grove are described. As he sleeps, a snake approaches him and is ready to bite when a gnat lands on his eyes. Reflexively killing the gnat he awakes, sees the snake and kills it. That night, the gnat appears to the shepherd in a dream, laments its undeserved fate, and gives a long description of the underworld and the souls of the dead mythological heroes there, allowing it to digress. The gnat especially focuses on the story of Eurydice and the Trojan War. The gnat goes on to describe famous Roman heroes and then his audience before Minos to decide his fate. When he awakes, the shepherd constructs a heroon to the gnat in the grove and the poet has a flower-catalogue. The shepherd inscribes it with the inscription "Little gnat, to you deservedly the guard of the flock repays his funeral duty for your gift of life." The Culex cannot be one of Virgil's juvenalia because it alludes to the full body of his work; thus, it is usually dated to sometime during the reign of Tiberius. The poem has been variously interpreted as a charming epyllion or as an elaborate allegory in which the shepherd symbolizes Augustus and the gnat Maecenas.[5]

The Ciris is an epyllion in 541 hexameters describing the myth of Nisus, the king of Megara and his daughter Scylla. The epyllion was a popular style of composition which seems to have developed in the Hellenistic age; surviving examples can be found in Theocritus and Catullus. The poet begins his hundred line prologue by invoking the Muses and Sophia, despite the fact that he is an Epicurean, and describes his poem as a gift to Messalla like the robe given to Minerva in the Panathenaia. The poet differentiates the Scylla of his poem from the sea-monster Scylla and describes the monster's birth and metamorphosis. He starts by describing Minos' siege of Megara and the lock of purple hair on the head of Nisus which protected the city. While playing ball, Scylla is shot by Cupid and falls madly in love with Minos. As a prize for Minos, she tries to cut the lock of her father, but her nurse, Carme, asks Scylla why she is upset. After Scylla tells her she is in love with Minos, Carme says that Minos earlier had killed her daughter Britomartis and convinces Scylla to go to bed. In the morning, Scylla tries to talk Nisus into making peace with Minos, and the nurse brews a magical potion, but nothing works and Scylla cuts off the lock. The city falls and Scylla, lamenting Minos' refusal to marry her, is taken prisoner on the Cretan ships which sail around Attica. The poet describes her metamorphosis in detail; by the pitying Amphitrite she is transformed into the ciris bird, supposedly from the Greek keirein ("cut"). Jupiter transforms Nisus into a sea-eagle, which pursues the ciris like Scorpio pursues Orion. Based on composition, the poem must be placed after Ovid and before the 2nd century. A Tiberian date seems likely for its composition.[6]

This poem in 38 elegiac couplets describes the song of the barmaid Syrisca. She describes a lush, pastoral setting and a picnic laid out in the grass and invites an unnamed man to spend time with her, stop thinking about the future, and live for the present.

The Moretum in 124 hexameter lines describes the preparation by the poor farmer Simylus of a meal. The poem is in the tradition of Hellenistic poetry about the poor and their diet and has a precedent in Callimachus' Hecale and poems that describe theoxeny. Waking before dawn, he starts the fire, grinds grain as he sings and talks to his African slave Scybale, and starts baking. His garden and its products are described. Simylus fashions from garlic, cheese, and herbs the moretum a type of pesto, eats, and goes out to plow.

This poem is a series of curses by a dispossessed farmer on the veteran who has usurped his land in 103 hexameter lines. The tradition of curse poetry goes back to the works of Archilochus and Hipponax. The poem may have connections to the Hellenistic Arae of Euphorion of Chalcis, but it is also very much in the pastoral tradition of Theocritus and the Eclogues. The poem opens pastorally by addressing Battarus, a friend whose farm has also been confiscated and describing the actions of the soldier called Lycurgus. First the speaker curses the plants on the farm with bareness and then asks the forests to burn before Lycurgus destroys them with his axe. He then prays to Neptune for a flood to destoy the farm and for the land to turn into a swamp. The poem ends with a farewell to his farm and his lover, Lydia.

This hexameter lament in 80 lines was connected to the Dirae because of the mention of Lydia in that poem but is probably an independent piece. It also has a pastoral setting and is in the tradition of Theocritus' amatory idylls and Latin love elegy. It begins with the poet saying he envies the countryside which Lydia inhabits and describes his pain at his separation from her. He looks to the animal world and the astronomical world with their amorous pairings and feels despair at the passing of the golden age. He describes the love of Jupiter and Juno, Venus and Adonis, and Aurora. He ends with the impossible wish to have been born in a better age. 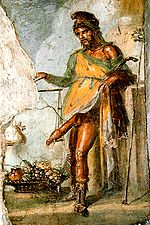 A painting of Priapus from the House of the Vettii in Pompeii.

This is a collection of three poly-metric poems with the god Priapus as the speaker. Priapea are a traditional sub-genre of Greek poetry and are primarily found in Greek epigrams. A notable piece of Priapic poetry can be found in Theocritus 13 and Roman examples can be found in Horace and Tibullus. The first poem in two elegiac couplets is a mock-inscription in which the god describes the setting of his statue at different seasons and his dislike of winter and fear of being made into firewood. The second poem is in 21 iambic trimeters. Priapus addresses a passer-by, describes how he protects and nourishes the farm through the seasons, and demands respect, as his wooden phallus can double as a club. The third poem in 21 hexameters. The Priapus statue addresses a group of boys who want to rob the farm. It describes its protection of the farm and the worship the owners give it. He ends by telling the boys to rob a neighbor's farm whose Priapus is careless.

The Catalepton is a collection of fifteen or sixteen poems in various meters. The first elegiac poem is addressed to Tucca and describes the poet's separation from his lover. The second makes fun of a fellow writer for his obsession with Attic dialect. The third elegiac piece is a description of a successful eastern general who fell from power. Poem 4 in elegiacs is on the poet's friendship and admiration for Octavius Musa. Poem 5 describes a poet's giving up of rhetorical study to learn philosophy with Siro. The elegiac sixth poem criticizes Noctuinus and his father in law for some scandal with a girl. Poem 7 in elegiacs talks about love and plays with Greek words in Latin poetry. The eighth elegiac poem addresses the farm of Siro as being dear to the poet as his Mantuan and Cremonan estates. Poem 9 is a long elegiac piece which is an encomium to Messalla describing the poet's pastoral poetry, praising Messalla's wife, Sulpicia, and recounting his military achievements. Poem 10 is a parody of Catullus 4 and describes the career of the old muleteer Sabinus. The elegiac poem 11 is a mock lament for the drunken Octavius Musa. Poem 12 makes fun of Noctuinus for his two lovers. Poem 13 is in iambics and attacks Lucienus for his love affairs and seedy living. Poem 13a is an elegiac epitaph on an unknown scholar. Poem 14 is an elegiac prayer to Venus to help him complete the Aeneid and a promise to pay his vows to her. The final poem is an elegiac epigram for Virgil's tomb signed by Varius.

The Elegiae are two poems on the death of Maecenas (8 BCE) in elegiac couplets whose ascription to Virgil is impossible. It has been conjectured by Scaliger that they are the work of a Albiovanus Pedio, who is also responsible for the Consolatio ad Liviam.[7] They were formerly transmitted as one long poem. The first poem opens with the author saying he has just written a lament for a young man, perhaps Drusus who died in 9 BCE. The poet describes his first meeting with Maecenas introduced by Lollius, praises his art, and defends his wearing of loose clothes (criticized later by Seneca).[8] Maecenas' life spent on culture rather than war is praised, as is his service at Actium; a long mythological section compares Maecenas to Bacchus and describes the labors of Hercules and his service to Omphale. The death is compared to the loss of Hesperus and Tithonus and ends with a prayer that the earth rest lightly on him. The second poem was separated by Scaliger and is far shorter, encompassing the dying words of Maecenas. First he wishes he had died before Drusus and then prays that he be remembered, that the Romans remain loyal to Augustus, that he have an heir, and that Augustus be divinized by Venus.