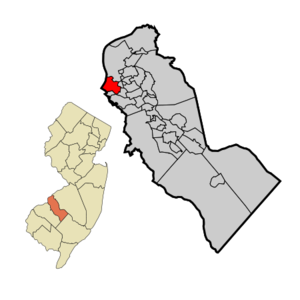 As of the 2000 census, 34.2% of Gloucester City residents were of Irish ancestry, the ninth-highest percentage of any municipality in the United States, and third-highest in New Jersey, among all places with more than 1,000 residents identifying their ancestry. [ [http://www.epodunk.com/ancestry/Irish.html Irish Communities] , . Accessed , .]

There were 4,213 households out of which 32.6% had children under the age of 18 living with them, 46.8% were married couples living together, 14.6% had a female householder with no husband present, and 32.6% were non-families. 27.2% of all households were made up of individuals and 13.0% had someone living alone who was 65 years of age or older. The average household size was 2.72 and the average family size was 3.32.

In 1623, Dutch colonists built a fortification on the location of nowadays Gloucester City, called Fort Nassau, for trade with the Indians.

Gloucester City is well known for being a working class neighborhood.

The serve students in kindergarten through twelfth grade. The district is one of 31 s statewide. [ [http://www.nj.gov/cgi-bin/education/abbotts/abbotturls.pl?string=code&maxhits=100 Abbott Districts] , . Accessed , .] Students from Brooklawn attend the district's high school as part of a . [Graham, Kristen A. [http://nl.newsbank.com/nl-search/we/Archives?p_product=PI&s_site=philly&p_multi=PI&p_theme=realcities&p_action=search&p_maxdocs=200&p_topdoc=1&p_text_direct-0=0EB7374187AAC1B9&p_field_direct-0=document_id&p_perpage=10&p_sort=YMD_date:D&s_trackval=GooglePM "BROOKLAWN CONSIDERS FINDING NEW DISTRICT FOR HIGH SCHOOL PUPILS"] , "", , . Accessed , . "The tiny Brooklawn system, comprising just over 300 students and one school, sends about 80 ninth through 12th graders to the neighboring Gloucester City district, which has more than 2,000 students and four schools."]

Portions of the City of Gloucester within the can charge a 3½ sales tax rate. [ [http://www.cityofgloucester.org/doingbusiness.php Gloucester City Urban Enterprise Zone] , accessed , .] In addition to other benefits to encourage employment within the Zone, shoppers can take advantage of a reduced 3½% rate (versus the 7% rate charged statewide). [ [http://www.state.nj.us/njbusiness/financing/tax/geographic.shtml#2 Geographic & Urban Redevelopment Tax Credit Programs: Urban Enterprise Zone Employee Tax Credit] , State of . Accessed , .]

* is a former ground located in Gloucester City that was the part-time home to the Philadelphia Athletics of the American Association from 1888 to 1890.
* Gloucester City is cited by some as the birthplace of . — originally a band called "Bill Haley and the Saddlemen" — were the house band playing at the Twin Bar for 18 months starting in 1952 and are said to have modified their performing style while on stage there to an early form of rock and roll. [Strauss, Robert. [http://www.nytimes.com/2007/07/10/nyregion/10rock.html?_r=1&ref=nyregion&oref=slogin "Cradle of Rock? Two Towns Stake Their Claims"] , "", , . Accessed , . "But Gloucester City, another New Jersey town, about an 80-mile drive northwest of Wildwood, wants to cut in right there. And on Saturday, Mr. Richards and other Comets plan to headline a show in Gloucester City, in Camden County along the Delaware River, to commemorate an 18-month span in the early 1950s when Mr. Haley led the house band at the Twin Bar."] [ [http://www.cityofgloucester.org/newshome.php News] , Gloucester City. Accessed , .]