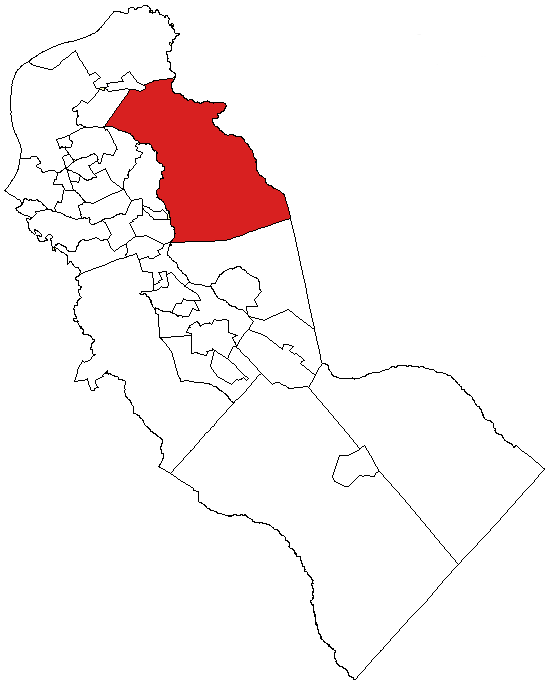 The area now known as Cherry Hill was originally settled by the Lenni-Lenape Native Americans who coexisted peacefully with the first settlers from , Quaker followers of who arrived in the late 1600s.

The township underwent explosive growth in the post- era, with continued population growth until the 1980s. Today, the municipality's population remains stable with new development generally occurring in small pockets of custom luxury homes or through the rehabilitation and of existing commercial and industrial areas.

Origin of the name "Cherry Hill"

The name "Cherry Hill" was chosen by the township's citizens in a non-binding in 1961, and was officially adopted , .

Another motivation for the name change was a desire for the township to have its own post office. However, there were other places in New Jersey named Delaware, . The postal service suggested a name change, and Mayors Christian Weber and John Gilmour, whose administrations came during the renaming decision, agreed.

Cherry Hill's eastern border with Burlington County is defined by the . The creek separates Cherry Hill from the communities of Maple Shade Township, Evesham Township (or colloquially, 'Marlton'), and Mount Laurel Township.

The Cooper River forms the southern border with Haddon Township, Haddonfield Borough, and Lawnside Borough, through the Maria Barnaby Greenwald Park and parallel to the east-west Route 70.

There were 26,227 households out of which 32.1% had children under the age of 18 living with them, 62.8% were married couples living together, 8.3% had a female householder with no husband present, and 26.0% were non-families. 22.5% of all households were made up of individuals and 11.0% had someone living alone who was 65 years of age or older. The average household size was 2.61 and the average family size was 3.08.

Created as Delaware Township in 1844, the community was first governed by a Township Committee. On , , the citizens adopted, in a special election, a Walsh Act Commission form of government, consisting of a three-member Board of Commissioners. In 1962, the Township's population passed the 30,000 mark and two additional Commissioners were elected. Following a study made by a Citizen's Advisory Committee, a special election was held in 1962.

The Township voted to change its form of government to the Council-Manager Plan A under the Faulkner Act. Five Council members were elected at-large in a May election to serve concurrent four-year terms. The Council members elected one of their own as Mayor, but a Township Manager served as the Chief Administrator of the Township.

By 1975, after a report, Cherry Hill was ready for another change. After a ballot referendum, the citizens adopted the Council-Manager Plan B form of government. Two features of the government were changed: council members were to be elected every two years for overlapping terms of four years and the number of Council members would increase from five to seven.

After a 1981 referendum, the government changed yet again, this time to a Mayor-Council Plan B form of government. A full-time 'strong' mayor was elected directly by the people and seven Council members were elected at-large for staggered four-year terms.

The most recent change, resulting from a ballot referendum in November 1986, changed the elections from a non-partisan May election to a partisan November election.

The system is made up of 19 schools: an early childhood center, twelve elementary schools, three middle schools, two traditional high schools, and an alternative high school program. It is the twelfth-largest school district in the state of New Jersey and one of the largest suburban districts. This year, the district will top 11,800 students and enrollments continue to grow. The district has grown by about 2,000 students in the last 12 years. The system has 1,400 employees, including 1,000+ teachers.

is run by the . [http://www.stpetercelestine.org/ St. Peter Celestine] (Pre-K to 8) and [http://www.queenofheaven.org/school/ Queen of Heaven School] (K-8) are elementary schools run by the Diocese. [ [http://www.camdendiocese.org/schools/cc.html Camden County Schools] , . Accessed , .]

is a private Christian fully-accredited PreK-12 institution founded as the Christian Day School of Camden County in 1946.

[http://www.kellmanacademy.org Kellman Academy] is a private serving children aged 3 through 8th grade. The school was founded in 1959 in association with Congregation Beth El at Parkside in Camden.

[http://www.politz.org Politz Day School] is a private serving early childhood through middle school students. The school is co-located with and supported by Congregation Sons of Israel.

operates one of its three campuses at the William G. Rohrer Center at Route 70 East and Springdale Road.

The is an agency of the Township's municipal government. Originally called "The Cherry Hill Free Public Library", the word "Free" was dropped from the title in 2003. The current library building was completed in December 2004 to replace a 1966 structure at approximately the same location: 1100 Kings Highway North. At 72,000 square feet, Cherry Hill's library is among the largest municipal libraries in New Jersey.

Interstate 295 has three exits in the township. Exit 34A/B is Route 70 (Marlton Pike); exit 32 is CR 561 (Haddonfield-Berlin Rd.); and exit 31 goes directly to the Woodcrest station of the PATCO high-speed commuter rail line, which travels from 15-16th & Locust Streets in Philadelphia, to Lindenwold.

Several bus routes also pass through or stop in the township. The NJT , traveling on the Pennsylvania-Reading Seashore Line route, stops at the Cherry Hill station, located on the west side of the tracks between the Garden State Pavilion shopping center and the newer development on the grounds of the former Garden State Racetrack.

*In 2006, Cherry Hill was named among the 'Best Places to Live' in the United States by "Money" Magazine [ [http://money.cnn.com/magazines/moneymag/bplive/2006/snapshots/CS3412280.html Best Places to Live 2006] , "Money" magazine, accessed , .] and was ranked eighth safest place to live in the same survey. [ [http://money.cnn.com/magazines/moneymag/bplive/2006/top25s/safest.html Best Places to Live 2006: cities with the lowest crime risk] , "Money" magazine, accessed , .]
*Cherry Hill was also named among the Best Places to Live in the Philadelphia region for 2006 by Philadelphia Magazine (see magazine print edition, October 2006).
*, , and are headquartered in Cherry Hill.
*Cherry Hill Mall, a principal shopping center in the Philadelphia, , was the first enclosed shopping mall in the eastern United States, opening in October 1961.
*The Neulander murder occurred in Cherry Hill.
*In the movie "," Cherry Hill is the location of the White Castle franchise Harold and Kumar ultimately visit. There are, in fact, no White Castle locations in Cherry Hill, nor does the movie's representation of Cherry Hill accurately reflect the dense, suburban nature of the town or its proximity to Philadelphia. Rather, it depicts Cherry Hill as rural farmland. [Cahillane, Kevin. [http://query.nytimes.com/gst/fullpage.html?res=9805EEDB173FF936A2575BC0A9629C8B63&sec=&spon=&pagewanted=2 "Homegrown: A Stoner Comedy Straight Out of Randolph"] , "", , . Accessed , . "Some New Jersey moviegoers of sound mind may wonder whether Mr. Hurwitz and Mr. Schlossberg have been away too long, noting a few geographical discrepancies as the half-baked heroes drive all the way to Cherry Hill from Hoboken for their U.S.D.A.-approved meal. For one thing, there is no White Castle in Cherry Hill."]
*In the movie "The Freshman", Clark Kellogg () is sent to Cherry Hill to deliver a .
*In 1973-1974, Cherry Hill briefly had a WHA hockey team, the , and from 1964 to 1971, an team, the Jersey Devils (unrelated to the present NHL ). Both teams played at the .
*Muhammad Ali purchased a house on Barbara Drive in Cherry Hill's Voken Tract in 1971. [Straus, Robert. [http://query.nytimes.com/gst/fullpage.html?res=9403E1D9113DF931A35751C1A9679C8B63 WORTH NOTING; So Ali Owned It. So What. How Many Bathrooms?] , "", , .]
*Mentioned in Nerf Herder's "New Jersey Girl", the girl in question is from Cherry Hill.