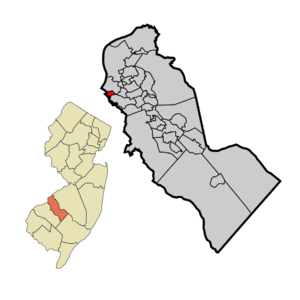 Brooklawn is a Borough in Camden County, , . As of the , the borough population was 2,354.

Brooklawn was incorporated as a borough on , , from portions of the now-defunct Centre Township, based on the results of a referendum held on , . The borough was reincorporated on , .

There were 961 households out of which 32.8% had children under the age of 18 living with them, 41.8% were married couples living together, 16.4% had a female householder with no husband present, and 37.5% were non-families. 30.9% of all households were made up of individuals and 12.7% had someone living alone who was 65 years of age or older. The average household size was 2.45 and the average family size was 3.09.

Brooklawn is governed under the Borough form of New Jersey municipal government. The government consists of a Mayor and a Borough Council comprising six council members, with all positions elected at large. A Mayor is elected directly by the voters to a four-year term of office. The Borough Council consists of six members elected to serve three-year terms on a staggered basis, with two seats coming up for election each year.

The serves public school students in pre-kindergarten through eighth grade at Alice Costello School. As of the 2005-06 school year, the school had an enrollment of 124 students. [ [http://nces.ed.gov/ccd/schoolsearch/school_list.asp?Search=1&DistrictID=3402370 Data for the Brooklawn Public School District] , . Accessed , .]

For grades 9-12, public school students attend in Gloucester City as part of a with the . [Graham, Kristen A. [http://nl.newsbank.com/nl-search/we/Archives?p_product=PI&s_site=philly&p_multi=PI&p_theme=realcities&p_action=search&p_maxdocs=200&p_topdoc=1&p_text_direct-0=0EB7374187AAC1B9&p_field_direct-0=document_id&p_perpage=10&p_sort=YMD_date:D&s_trackval=GooglePM "BROOKLAWN CONSIDERS FINDING NEW DISTRICT FOR HIGH SCHOOL PUPILS"] , "", , . Accessed , . "The tiny Brooklawn system, comprising just over 300 students and one school, sends about 80 ninth through 12th graders to the neighboring Gloucester City district, which has more than 2,000 students and four schools."]