Mount Laurel Township is a Township in Burlington County, New Jersey, United States, and is an edge city "suburb" of Philadelphia. As of the 2000 United States Census, the township population was 40,221. It is also the home of NFL Films.

Mount Laurel Township was incorporated as a township by an Act of the New Jersey Legislature on March 7, 1872, from portions of Evesham Township.[7]

Ramblewood is a census-designated place and unincorporated area located within Mount Laurel Township.

There were 16,570 households out of which 30.4% had children under the age of 18 living with them, 55.7% were married couples living together, 8.5% had a female householder with no husband present, and 33.2% were non-families. 27.9% of all households were made up of individuals and 8.9% had someone living alone who was 65 years of age or older. The average household size was 2.41 and the average family size was 2.98.

Township government consists of a Township Committee consists of five members elected at large in partisan elections to serve four-year terms on a staggered basis, with one or two seats coming up for election each year.[9] 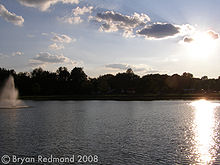 Parkway Elementary School was one of four schools in New Jersey recognized by the national Blue Ribbon Schools Program, awarded by the United States Department of Education, for the 2005–06 school year.[17]

The New Jersey Turnpike passes through Mount Laurel Township. The Turnpike's James Fenimore Cooper rest area is located between Interchanges 4 and 5 northbound at milepost 39.4.[20] Mount Laurel hosts Exit 4 of the Turnpike, with the 4 toll gate consisting of 8 lanes at the gate.

New Jersey Transit provides bus service to Philadelphia on the 317 and 413 bus routes, with local service on the 457 line.[21]

The Mount Laurel Decision is a judicial interpretation of the New Jersey State Constitution that requires municipalities to use their zoning powers in an affirmative manner to provide a realistic opportunity for the production of housing affordable to low and moderate income households. The decision was a result of a lawsuit brought against the town by the N.A.A.C.P. that was decided by the New Jersey Supreme Court in 1975 and reaffirmed in a subsequent decision in 1983.[22]

The history behind this, and the story leading to the Decision was highlighted in a book by David L. Kirp called "Our Town".[23]

Mount Laurel was a small, poor rural farming community until it was hit with massive suburban growth from Philadelphia in the latter 1900s. Poor families, whose history had resided there for centuries, were suddenly priced and forced out. In 1970, at a meeting about a proposal for affordable housing, held at an all black church in Mount Laurel, Mayor Bill Haines summed up the newcomers perspectives by saying "If you people can't afford to live in our town, then you'll just have to leave."[23]

Even though the poor black families in Mount Laurel were not from urban ghettos, and were not involved in gang activity, the new suburban influx thought otherwise, and significantly delayed the creation of affordable housing, citing concerns of gang activity and an influx of inner city criminals. Exampled comments from town meetings against affordable housing included "we need this like Custer needed more Indians"; "it's reverse discrimination"; "we lived in this in South Philly and Newark" they said, and that the housing would be a "breeding ground for violent crime and drug abuse".[23]

Resident advocates of the housing were treated with abuse and threats. Leading advocate Ethel Lawrence, a poor black resident who lived her life in Mount Laurel, had her house repeatedly vandalized, and once her bedroom window was shot at.[24][25] Long time white residents also turned to try to force the poor blacks out of town. Although the court ruled in favor of creating affordable housing, residents did manage to delay the process for decades.[23]

Notable current and former residents of Mount Laurel Township include: 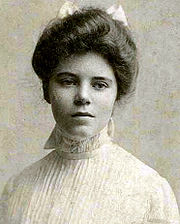 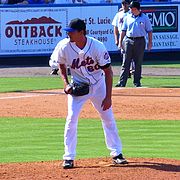