/pəˈræməs/ pə-ram-əs) is a borough in Bergen County, New Jersey, United States. As of the 2010 United States Census, the borough population was 26,342.[4] A suburb of New York City, Paramus is located between 15–20 miles (24–32 km) northwest of Midtown Manhattan and approximately 8 miles (13 km) west of Upper Manhattan.

Paramus is one of the largest shopping meccas in the country, generating over $5 billion in annual retail sales,[8][9][10] more than any other ZIP Code in the United States.[11][12][13] This is despite the fact that Paramus is noted for having some of the most restrictive blue laws in the nation (even stricter than those prevailing in the rest of Bergen County), banning nearly all retail and white-collar businesses from opening on Sundays. So, almost everything is closed except restaurants and some grocery stores on Sunday.[14]

Paramus was incorporated as a borough by an act of the New Jersey Legislature on March 2, 1922, based on the results of a referendum held on April 4, 1922 that passed by a vote of 238 for and 10 against.[15][16] Paramus was created from portions of Midland Township, which now exists as Rochelle Park.[17]

The area that became northern New Jersey was first settled by the Lenape people. In the Lenape language (Anglicized), the area that became Paramus was named “Peremessing” which meant that it had an abundant population of Wild Turkey.[18][19] There is a large metal statue of a wild turkey in the Paramus Park mall.[19]

Although a 19th Century account claims that “The Paramus estate was purchased from the Native Americans for a quart of whiskey and a pound of tobacco”,[20] the historical record of European settlement of Paramus is more detailed.

Albert Saboroweski, whose descendants became known by the family name “Zabriskie”,[21] immigrated from Poland via the Dutch Ship 'The Fox'[22] in 1662 and settled in the Dutch West Indies Company town of Ackensack, today’s Hackensack, where he started a family. A son, Jacob, was kidnapped by the Lenape and held for 15 years. When he was returned to his family, the Lenape explained to Saboroweski that they had taken the child in order to teach him their language so that he could serve as a translator. They also granted Saboroweski approximately 2,000 acres (8.1 km2) of land which became known as the “Paramus Patent”.[23]

During the American Revolutionary War, there were Tories and Patriots throughout Bergen County, with Patriots “greatly outnumbering” Tories.[24] Although no major battles were fought in Bergen County, Paramus nevertheless saw a great deal of military activity. Colonial troops were stationed in Ramapo under the command of Aaron Burr.[25] In 1777, the British raided the Hackensack area and Burr marched troops to Paramus from which he attacked the British, forcing them to withdraw.[26] General George Washington was in Paramus several times during the War: December, 1778; July, 1780; and, December, 1780.[27] Following the Battle of Monmouth Washington established his headquarters in Paramus in July, 1778.[28] Over the advice of his staff, Washington moved his headquarters to Westchester County, New York.[29]

A section of Paramus known as Dunkerhook (meaning dark corner in Dutch) was an African-American community dating back to the early 18th century. Although historical markers on the current site and local oral tradition maintain that this was a slave community, contemporary records document that this was actually a community of free blacks, not slaves.[30]

During World War II, Farview Avenue was closed off by the United States Army, who positioned anti-aircraft artillery along the street to defend against an air attack on New York City.[citation needed] Farview Avenue is located at the highest peak in Paramus and has a clear view of the New York City skyline.

Paramus became one of the truck farming areas that helped New Jersey earn its nickname: the “Garden State”.[31] By 1940, Paramus' population was just 4,000, with no town center and just 94 retail establishments.[32] Although the opening of the George Washington Bridge in 1931 and the widening of New Jersey Route 17 and New Jersey Route 4 (which intersect in southern Paramus), made the area accessible to millions, “it was not until the 1950’s that massive development hit this section of northern New Jersey”.[33]

During the 1950s and 60s Paramus, lacking any developmental master plan until 1969, quickly was transformed into two shopping corridors when its farmers and outside developers saw that shopping malls were more lucrative than produce farming.[33] “It was a developer’s dream: flat cleared land adjacent to major arterials and accessible to a growing suburban population and the country’s largest city – with no planning restrictions”.[33] New York had a State sales tax, but New Jersey had none, so with the opening of Manhattan department stores in the Bergen Mall (1957), the Garden State Plaza (1957) and Alexander’s (1961), Paramus became the “first stop outside New York City for shopping”.[34] From 1948-58 Paramus’ population increased from 6,000 to 23,000, the number of retail establishments tripled from 111 to 319 and annual retail sales increased from $5.5 million to $112 million.[34] By the 1980s, although the population just slightly exceeded 1960s levels, retail sales were $1 billion.[34]

Paramus is governed under the Borough form of New Jersey municipal government. The government consists of a Mayor and a Borough Council comprising six council members, with all positions elected at large. A Mayor is elected directly by the voters to a four-year term of office and only votes to break a tie. The Borough Council consists of six members elected to serve three-year terms on a staggered basis, with two seats coming up for election each year.[40]

There are two public libraries in Paramus. There is the Main Library on Century Road. There is also the Charles E. Reid Branch library on Midland Avenue, which was originally a four-room schoolhouse built in 1876.[60]

The borough's original Public Library, known locally as the Howland House, was originally located at the intersection of Spring Valley Road and Howland Avenue. It was demolished sometime in the late 1990s. A September 11, 2001 memorial park now exists at the site known as Howland Memorial Grove.[61]

Paramus is home to many private religious schools. Paramus Catholic High School is a co-educational Roman Catholic high school founded in 1965 and operated by the Archdiocese of Newark.[65] With more than 1,500 students, it has the largest enrollment of any Roman Catholic high school in the state of New Jersey.[66] It is also the location of Visitation Academy, a K-8 Catholic school also overseen by the Newark Archdiocese. Annunciation School, another K-8 Catholic school, operated from 1954–1982 at the Annunciation Church on West Midland Avenue. Paramus is home to both the Yavneh Academy, a K-8 Jewish day school, and the Frisch School, a Modern Orthodox Jewish yeshiva serving grades 9–12 that describes itself as the nation's second largest coed yeshiva high school.[67]

Route 17, Route 4, and the Garden State Parkway pass through Paramus. 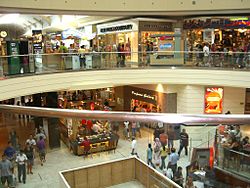 Interchange of NJ Routes 4 and 17

Paramus is known for its multitude of stores and malls.[69] It has five major indoor shopping centers, due to its easy access for residents in the areas of Bergen County and Passaic County in New Jersey and Rockland County in New York. New Jersey also does not levy a sales tax on clothes and shoes, which makes it an attractive shopping destination for people even further away in New York City, who pay sales tax on clothing items above $110 in price, in addition to the lower standard rate of 7% in New Jersey, compared to 8⅜ in New York City.[70] The spending levels generated by the malls have made Paramus one of the top retail ZIP codes in the country.[71]

Paramus, along with the rest of Bergen County, has strict blue laws preventing stores selling non-food items from opening on Sundays. Although it started as a religious observance, it is kept on the books due to a desire of the residents of Paramus to have one day a week when traffic is tolerable in the town. Furthermore, both Paramus and the surrounding county have significant Jewish and Muslim populations who do not observe Sabbath on Sunday. This law was called into question most recently when a BJ's Wholesale Club opened at the 4/17 junction. BJ's was allowed to open on Sundays, but is only allowed to sell food and basic necessities. The store has been structured to deny access for shoppers to purchase items that cannot be purchased on Sunday. Paramus has its own blue laws that are significantly more restrictive than those in effect in other communities in Bergen County. It is one of the last places in the entire United States to have such an extensive blue law.

Local blue laws in Paramus were first proposed in 1957, while the Bergen Mall and Garden State Plaza were under construction. The legislation was motivated by fears that the two new malls would aggravate the already-severe highway congestion caused by local retail businesses along the borough's highways.[14]

The Paramus Borough Code forbids the performance of any "worldly employment" on Sunday, with exceptions for charity, and the sale of newspapers, drugs, meals, prepared food and cigarettes, among a limited number of exceptions. Even work performed inside one's own home is prohibited, unless one can "prove to the satisfaction of the Judge that he uniformly keeps the seventh day of the week commonly known as the 'Sabbath'...".[74] In spite of its six-day shopping week, Paramus consistently has the most retail sales of any ZIP Code in the United States.[75] Many national chain stores boast Paramus as their most prominent locations, including Nordstrom, in which the Paramus store is their best-performing chainwide. There are 25 retailers that occupy multiple stores in Paramus,[76] including Macy's which had outlets in three malls for a short period of time. Some retail analysts view Paramus as being two markets, centered on the two major highways. Lord & Taylor has two locations in Paramus, giving Paramus the distinction of the only town with more than one Lord & Taylor location.

When Paramus residents go shopping on Sundays, they can visit Willowbrook Mall, an approximate 20 minute drive to its location in Wayne, New Jersey, or Palisades Center in West Nyack, New York, about 25 minutes away by car. An unsuccessful 2010 proposal by Governor of New Jersey Chris Christie would have ended Bergen County's blue laws, with the governor citing industry statistics estimating that the $1.1 billion in added retail revenue on Sundays would generate an additional $65 million in sales taxes for the state.[77]

Due to the blue law, all malls in Paramus (as with the rest of Bergen County) are closed on Sunday. Malls are also closed on two public holidays; Thanksgiving Day and Christmas Day. Early closing (half days) on Christmas Eve, New Year's Eve and New Year's Day.

In 1931, one of the earliest drive-in theaters opened in Paramus, and boasted the world's largest and brightest screen, located behind what is now Westfield Garden State Plaza. The Paramus Drive-In closed in 1987. The last movie presentation there was a double- feature, 'Crocodile Dundee' and 'The Untouchables'.

Paramus is the home to two county parks. On the eastern side of the borough is Van Saun County Park. It features Bergen County's only zoo, home to a wide variety of wild and domestic animals living in recreated habitats natural to each species. On the western side of the borough is Saddle River County Park which features a 6-mile (9.7 km) bike path reaching from Ridgewood to Rochelle Park.

The borough also has four golf courses. Two are open to the public with one operated by the borough and another operated by the county (Orchard Hills County Golf Course). Two private golf course are also located in Paramus, they are the Ridgewood Country Club and Arcola Country Club. In 2008, the Paramus Golf Course opened up a miniature golf course that is themed after the town of Paramus as well as the state of New Jersey. Turkey statues are scattered around the course to celebrate Paramus as the "land of the wild turkeys."

Notable current and former residents of Paramus include:

Paramus is home to the following locations on the National Register of Historic Places: