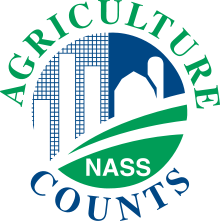 The National Agricultural Statistics Service or NASS is the statistical branch of the U.S. Department of Agriculture[1]. NASS has 46 field offices throughout the United States and Puerto Rico and a headquarters unit in Washington, D.C.. NASS conducts hundreds of surveys and issues nearly 500 national reports each year on issues including agricultural production, economics, demographics and the environment. NASS also conducts the Census of Agriculture every five years.

During the Civil War, USDA collected and distributed crop and livestock statistics to help farmers assess the value of the goods they produced. At that time, commodity buyers usually had more current and detailed market information than did farmers, a circumstance that often prevented farmers from getting a fair price for their goods. Producers in today's marketplace would be similarly handicapped were it not for the information provided by NASS.

The 1997 Appropriations Act [3] shifted the responsibility of conducting the Census of Agriculture from U.S. Census Bureau to USDA. Since then the census has been conducted every five years by NASS. The latest census was released on February 4, 2009 [4].

The primary sources of information for NASS reports are farmers, ranchers, livestock feeders, slaughterhouse managers, grain elevator operators and other agribusinesses. NASS relies on these survey respondents to voluntarily supply data for most reports.

NASS surveys are conducted in a variety of ways, including mail surveys, telephone interviews, online response, face-to-face interviews and field observations. Once the information is gathered and interpreted, NASS issues estimates and forecasts for crops and livestock and publishes reports on a variety of topics including production and supplies of food and fiber, prices paid and received by farmers, farm labor and wages, farm income and finances, and agricultural chemical use. NASS’s field offices publish local data about many of the same topics.

Producers, farm organizations, agribusinesses, lawmakers and government agencies all rely on the information produced by NASS. For instance: