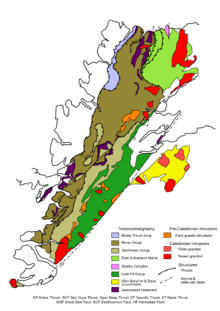 The Moine Thrust Belt is a linear geological feature in the Scottish Highlands which runs from Loch Eriboll on the north coast 190 km south-west to the Sleat peninsula on the Isle of Skye. The thrust belt is a zone between an extensive landscape of rolling hills over a metamorphic rock base to the east and more rugged, terraced mountains with steep sides sculptured from weathered igneous, sedimentary and metamorphic rocks to the west. Mountains within the belt display complicated layers and the width of the zone varies up to 10 km. Often, summits of hard rock cap softer sedimentary rock layers visible on lower slopes. Ben More Assynt, in the centre of the belt, is a typical example that rises from a glen of limestone caves up through sandstone terraces to a quartzite summit cap.

The discovery of the Moine Thrust in 1907 was a milestone in the history of geology as it was one of the first thrust belts discovered. The formation has since been re-interpreted many times. Eventually, the Moine Thrust corroborated tectonic plate theory in that, during the Caledonian orogeny of the Silurian period, Scotland was compressed as a European plate thrust westwards over a thrust fault and above the ancient Lewisian Gneiss on the Laurentian Plate.

The thrust belt defines the boundary between the Hebridean Terrane to its northwest and the Northern Highlands Terrane to its southeast.[1] The thrust carried metamorphic material over 200 km across Scotland entirely masking the geology of the previous terrane. However, small windows, such as the Assynt window and the Glen Achall imbricated thrust system, allow Geologists to estimate what the geology of Scotland was like before the Caledonian orogeny.