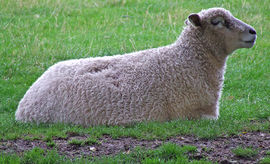 Cotswold sheep are a breed of domestic sheep originating in the Cotswold hills of the southern midlands of England. It is a dual-use breed providing both meat and wool.[1] As of 2009, this long-wooled breed is relatively rare, and is categorized as "minority" by the Rare Breeds Survival Trust of the U.K.[2]

Cotswold Sheep in the United States

By 1832, this breed was first introduced in the United States by Christopher Dunn of near Albany, New York.[3] Importation records of Cotswold only date back to that era.

While Christopher Dunn imported only one Cotswold ram to cross on his English Leicester ewes, the resulting crosses were so impressive that they prompted William Henry Sotham (bankrolled by the Hon. Erastus Corning, also of Albany) to make extensive importations of Cotswold sheep from the flock of William Hewer of Northleach, Gloucestershire, England.

Another early contributor to American flocks was the Charles Barton Flock, of Fyfield, North Leach, England, whose owner had family records of Cotswold pedigrees going back to at least 1640.

Similar to other longwool breeds, the Cotswold was often used for crossbreeding in early times. By 1914 over 760,000 had been recorded in the U.S. and Canada by the American Cotswold Record Assn. The breed was seen as a way of adding staple length to other breeds while not retreating from the size of the carcass or thickness of wool.

The main reason for its early popularity over other luster longwools in the U.S. was because it did not require "high feeding," (in other words, large amounts of grain) in order to make good growth.

According to Sheep! Magazine editor Nathan Griffith's book on the breed, Sheep Success: A Better Ewe & Big Bucks Too, the largest recorded representative of the Cotswold breed in America was Broadfield's Pride, owned by Charles Mattocks during the 1870s. This sheep was born in 1870 on the farm of William Lane of Gloucestershire, England, and attained the enormous weight of 445 lbs. Several of yearling lambs that he sired attained weights of 280 to 300 lbs. by one year of age.

The Cotswold is today considered a fairly slow growing sheep, because too much grain often kills it through Polioencephalomalacia (PEM), Pulpy Kidney, and Gravel or Urolithiasis (in rams).

However, the Cotswold is quite unique in its ability to thrive where other luster longwool breeds might starve to death.

The breed has a very mild-flavored meat. Mutton of Cotswold sheep tends to be far less gamy-flavored than even young lamb of many other breeds. It is loved and sought after, even by confirmed "lamb haters."

(Lamb in general is considered to be the most tender, most hypo-allergenic of the common meats, exceedinly easily digested. This makes it ideally suited to small children, elderly folk and athletes in training.)

Cotswold lambs are very hardy once dried off after birth. They have small heads at birth, if the ewes are not overfed during gestation, and therefore are more easily born than some breeds. Cotswold ewes usually have a "narrow flank," once thought of as weakness, until it was observed that this characteristic assists in directing parturient lambs towards a "normal" birth presentation.

Most Cotswold ewes produce quite a lot of milk. This can be a problem if overfed and they have only a single lamb by their side, due to "pulpy kidney" disease, unless preventive vaccinations are administered. But it raises at least the possibility that despite their long wool, Cotswold sheep might be worth experimenting with in the dairy.

Cotswold sheep live a respectably long time; it's not uncommon to see Cotswold ewes giving twins each year until well after 10 years old.

Cotswold sheep have since the days of Drayton and Camden in England (circa late 16th century to early 17th century) been noted as commonly having a slightly golden colored wool, dark colors having been noted as exceedingly rare. This trait gave them the nickname of the "Golden Fleece Breed."

Some old-time black "Cotswolds" historically hark back in some form or another to crosses like those originally noted in the "William Large flock" of the early 19th century in England. Those sheep were the product of extensive crossing with English Leicesters, a breed known for more often possessing colored wool.

According to W. S. Harmer of the British Cotswold Sheep Society, writing in 1892, the Cotswold is the only breed having been associated with the fabulous cloth of gold in antiquity. Florentine merchants traveled to England and bought large quantities of the shiny, linen-like wool for this purpose, at least as far back as the 13th Century.

Cotswold wool was used as a substitute for linen, woven with exceedingly fine wires of real gold, to make special garments for ancient priests and kings. This ancient weaving technique is substantially described in Exodus 39:1-3. 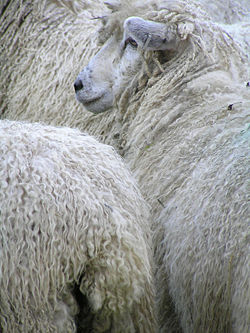 A flock of Cotswolds

Today, Cotswold wool is especially luxurious when hand-combed using wool combs to make a true worsted roving. In true worsted wool there is little or no "itch," because all the tips of the fibers (as they grew on the sheep) point in one direction and the end sheared from the sheep's skin points in the other direction. This produces a knit very like mohair. In fact Cotswold wool has often been called "poor man's mohair."

Cotswold wool is exceedingly strong, added by knitters to sock heels and toes to give extra strength to socks, and to elbows in hand-knitted sweaters. When worn in the woodlands, one doesn't leave bits of one's sweater in the brush. To the contrary: The brush is often torn from its stalk by the stout-fibered wool.

The wool attains 8 to 12 inches of growth in a year, and if not shorn promptly in early spring may become matted. It has a Bradford (spinning) count of 36s to 44s, most commonly around 40s. Generally, the tighter the curls of the fleece, the slenderer is the wool. The curly locks are often sold as "Santa Claus Beard" material.

Because the wool is so long and parts on the sheep’s spine, cold rains can cause health problems, though low temperatures and heavy snows are not problems to them. Where the wool parts along the backbone, it is possible for flies to bite the skin of the sheep; cattle or ox warble flies have been known to cause sterility in rams when they occur near the sheep’s head.

In July, 1964 a Roman-sculpted replica of a sheep's head was described as having been unearthed near Bibury Church in Gloucestershire, England. A photo of this sculpture is on page 6 of the booklet The Cotswold Sheep (L. V. Gibbings, ed. Publ. 1995 by Geerings of Ashford, Ltd, Ashford, Kent). The resemblance to modern Cotswold sheep is striking.

Some authorities claim (Elwes, 1893) the Cotswold breed was already in the Cotswold Hills when the Romans got there circa 54 B.C. Legend says there used to be sheepcotes or solidly built folds and that these cotes gave the name to the hills: "Cottes-wealds," in Anglo-Saxon, meaning exposed, windswept hills (wealds or wolds) dotted with Cotes. Thus it is said that the Cotswold Hills got their name from the flocks, which in turn got their name from the hills.

It is worth noting that keeping the sheep in winter in cotes for lambing time dates back to Biblical days in the Levant (1 Samuel 24:3 KJV “sheepcotes by the way;” 2 Chronicles 32:28 “and cotes for flocks”). In those regions, February—the ages old early-lambing month—is the third and heaviest month of winter rains. Could these now-extinct, transplanted Levantine husbandry methods be evidence of Phoenician importations of these sheep into this region?

Cotswold sheep are usually calm and friendly. They mostly have white faces. Occasionally faces are mottled with some light gray or tan hairs. Small black spots are permissible on the "points" (non-wooly portions of legs, ears, and face), but the wool itself should be white. Hairs or “kemp” should be absent in the wool.

Cotswold hooves should be black, but are sometimes streaked with undesirable light or translucent color. Foot rot is very uncommon in this breed. Cotswold rams occasionally have small scurs (highly discouraged) but no Cotswold should ever have full horns.

Cotswold sheep do not have the tight-flocking instinct of western range sheep, preferring to spread out and graze enclosed pastures more uniformly. Some strains of the breed are not as prone to internal parasites as others, provided their grazing forages are not excessively short.