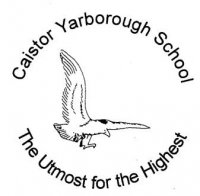 
Caistor Yarborough School is a mixed based in the market town of . The school falls within the jurisdiction of Lincolnshire County Council and serves a large area of rural Lincolnshire, with a number of pupils travelling from outside of the local authority area to attend the school, including pupils from and . There are currently an estimated 570 pupils attending the school, making it much smaller than the average school of this type in the .

Caistor Yarborough, is one of two in the town, the other being , an endowed dating from the reign of Charles I. These two schools are not the largest educational establishments in the region, as the situated 8 miles South of Caistor, in has an estimated 1,250 pupils.

The school occupies a hilltop site on the edge of the town of Caistor. Featuring predominantly , Caistor was originally established as a Roman fortress, due to its excellent strategic position on the North Western edge of the , and a number of ancient freshwater springs, which would have been the primary water source for the settlement. Now recognised as a valuable historical site, Caistor has numerous listed buildings and two s, one being the original Roman walls.

The school is on the Eastern edge of the town and the main access is from Grimsby Road (A1084) to the North of the site, with the A46 Caistor Bypass forming the Southern boundary of the site. The nearest major towns and cities include , appoximately 11 miles North East of Caistor; , 17 miles to the North West; Louth, 19 miles to the South East and the City of Lincoln, which lies approximately 24 miles South West of the town.

Built in 1938, Caistor Yarborough School was named after John Edward Pelham, the 7th . The school is sited near the border of the Brocklesby House estate, the Yarborough family seat, and the landmark is situated a mile to the North of the school. The Pillar is in the grounds of the Brocklesby estate and is an observation tower built as a memorial to Charles Anderson-Pelham, 1st Earl of Yarborough.

In September 2006, Caistor Yarborough was designated a specialist , as part of the Specialist Schools Programme, which was established in in 1995. As part of the schools new status, a Creative Arts facility was built on the school site at a cost of over £1,500,000. The facilities were officially opened on Wednesday 17th October 2007, by , a renowned English and of . The new facility houses purpose built studios for Dance, Music and Drama, with a recording studio and other state of the art equipment. For a number of years, the school has also been the holder of the "" award from , achieving Gold level in 2007. The award is in recognition of the high level of arts provision in the school curriculum. [ [http://www.artscouncil.org.uk/artsmark/index.php?location_id=94&offset=825 Artsmark Awarded Schools - Silver 2005, Gold 2007] ]

The standard uniform for sporting activities is black or trousers (in cold weather), worn with either a white polo shirt or a green . The uniform varies slightly depending on the sporting activity and the school has its own colours when competing against other schools in tournaments.

Today the school has a variety of buildings of different ages including some temporary facilities, due to ongoing development of the site in to ensure that it meets the requirements of a modern educational establishment.

Like many schools of the era, the original school building was constructed around a small Quadrangle, with the main hall to the East side and classrooms built around the other three sides. This building still exists, housing mainly technology workshops. The 'old school', as it is known, also houses the main entrance and school office, staff room and head teachers office, which are situated in the North Western corner of the building. A note of interest is that on a clear day, can clearly be seen in the distance from various points around the school site, despite the cathedral being situated approximately 24 miles South West of the town.

The first major development of the site, was the construction of a two storey classroom block for English and Mathematics, plus a single storey block of purpose built labs for Science.

Later, in the 1990's, another two storey teaching block was constructed, housing classrooms for Religious Studies, , and Modern Foreign Languages. This new building was attached to the existing English & Maths block and the layouts of some of the existing rooms were changed to provide direct access between the two buildings on both floors. The school library was relocated to a mobile classroom which was no longer needed after the new block was built and an IT suite was installed in its place. The new facility was officially opened in 1998 by Charles Pelham, the current Earl of Yarborough.

Caistor Sports Hall was purpose built for the school in the 1990s. The building houses a fully equipped, multi-purpose sports hall, a weights room, changing rooms, showers, offices, lockers and . When it was built, it was intended that the sports hall would double as a community sports venue, to ensure financial sustainability for the school. A Sports Development Officer was appointed to schedule an ongoing programme of out of hours community events and bookings, however financial losses estimated at £10,000 per year forced the school to consider closing the facility to the public, as it would have been illegal for the school to subsidise these losses using its own funds. Following a campaign to retain community use of the facility, West Lindsey District Council agreed to manage the building on the school's behalf, commencing 1st April 2006. The council now work in partnership with the school to ensure that the building operates profitable outside of school hours and it is run as a satellite from the De Aston Sports Hall, which is also a shared school/community facility based at the De Aston School in Market Rasen.

Following the construction of the new creative arts facility at the school in 2006, various changes were made to the school site. The new building was constructed on the former staff car park, which was relocated. As the facility houses a school canteen, this replaced the existing building, which was demolished along with other buildings also left redundant as a result of the build. These buildings had been grouped together next to the schools main driveway, so a new parking area was built in their place, designed to ease the ongoing problem of congestion caused by lack of space for school buses in the driveways. As well as being a creative arts facility for the school, the new building also houses facilities which double as a youth centre for the local community outside of school hours.