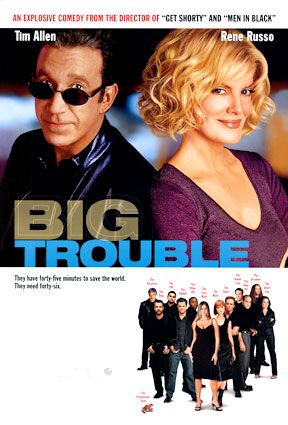 based on a novel by
starring =

"Big Trouble" (2002) is an American based on the "Big Trouble" by . It was directed by and featured a large cast including , and . Like much of Barry's fiction, it follows a diverse group of people through a series of extremely strange and humorous situations against the backdrop of .

Tagline: "They have forty-five minutes to save the world. They need forty-six."

*Eliot Arnold () - A divorced man who was recently fired from his job at the "" and is now running a struggling advertising agency. His teenage son Matt thinks he is a dork.
*Anna Herk () - Jenny's devoted mother and the reluctant wife of Arthur (even though she thinks he's an idiot). She becomes immediately attracted to Eliot, upon meeting him.
*Arthur Herk () - A rude and obnoxious man who is currently being marked for death for embezzling from his company.
*Matt Arnold (Ben Foster) - Eliot's son and the "killer" of Jenny. He also develops a crush on her.
*Jenny Herk () - Anna's daughter and a classmate of Matt. She is also Matt's target in the school's game "Killer".
*Snake Dupree and Eddie Leadbetter ( and ) - Two bumbling ex-convicts.
*Henry Desalvo and Leonard Ferroni ( and ) - Two hitmen hired to kill Arthur for embezzling.
*Off. Monica Romero () - A very with-it police officer.
*Off. Walter Kramitz () - Monica's not-so-with-it fellow officer. Asks his partner Romero out on dates even though he's married.
*Special Agents Pat Greer and Alan Seitz ( and ) Two FBI agents determined to retrieve a missing nuclear bomb.
*Puggy (Jason Lee) - A homeless wanderer who loves and Nina.
*Nina () - The Herks' Mexican housemaid. She falls in love with Puggy, who she initially mistook for Jesus.
*Bruce () - The consumer from hell who constantly belittles Eliot's advertisement ideas for his products.
*Andrew () - Matt's schoolfriend and witness for when Matt "kills" Jenny.
*Ivan and Leo ( and ) - Two Russian arms dealers and owners of the Jolly Jackal bar.
*Jack Pendick () - A security guard with a drinking problem. He sees Matt pointing a squirtgun at Jenny and gives chase while shooting at them with his handgun.

In a high-school game of Killer (in which a student must shoot another with a squirt gun) Matt Arnold has to "shoot" classmate Jenny Herk, and decides to sneak up on her at home. By hitmen are also there to kill Arthur Herk, who secretly embezzled money from his company. When the fake attempt crosses paths with the real one, police officers Monica and Walter are called out to the resulting disturbance. They call Eliot Arnold, Matt's father, and Eliot immediately feels a mutual attraction to Anne Herk (Jenny's mother), as Matt and Jenny begin to feel attracted to each other as well. The Herk's Mexican housemaid Nina, meanwhile, falls in love with a young man named Puggy, who lives in a tree on their property, after she runs from the shootings and he saves her from the hitmen.

Realizing that he is the intended victim, Arthur visits arms dealers, for a weapon, but in a mix-up he gets a suitcase nuclear bomb. Escaped convicts Snake and Eddie, who were previously kicked out of the bar for disorderly conduct, hold up the bar and kidnap Arthur and Puggy (who is an employee there) for the suitcase, not knowing its contents.

Meanwhile, Matt tries to "kill" Jenny in a mall parking lot, but a security guard thinks that Matt's gun is real. After the guard opens fire on them, Matt and Jenny run to the Herk house, followed by Monica and Walter, who stumble across the confusion. Eliot is called over as well.

The convicts force Arthur to return to his home, where they capture everyone and tie them up. Taking Puggy and kidnapping matt by carrying him over the shoulder with a gag in his mouth and hands tied behind his back, they leave (with the suitcase) for the Airport. Nina, who was hiding in her room, frees everyone except for Monica and Arthur (who were handcuffed to an entertainment system). Shortly after, the house is visited by two agents who are tracking the bomb. They free Monica and have her lead them to the airport (leaving Arthur, as he was poisoned by a hallucinogenic toad, causing him to think that his dog is possessed by ).

The criminals reach the plane still carrying matt over the shoulder. Puggy manages to escape, but the bomb is accidentally enabled when going through security. The FBI agents tell everyone that unless the bomb is retrieved soon, the plane must be shot down. Puggy escapes, and leads the group to the criminals' plane, which Eliot sneaks onto.

Meanwhile, the two hitmen get out of the traffic jam (caused by Snake and Eddie) and reach the airport. They bump into Off. Romero, and Special Agents Greer and Seitz, knocking the hitmen's Remington Sniper Rifle out of their golf bag in the process. The FBI agents, having more serious problems, leave this to Romero since it's her "jurisdiction." Romero grabs the rifle, and removes its bolt, rendering it useless. She then tosses the rifle down, saying: "gentlemen" and leaves. Henry Desalvo remarks to Leonard that Miami is worth shit...but the cops are kinda nice.

Eliot, having sneaked onto the plane, attacks the criminals by knocking Eddie out with a fire extinguisher and blasting the extinguisher at Snake. On seeing the bomb is now close to detonation, Eliot hurls it out of the now open plane door, only for Snake to leap after it. In a memorable feat of dumb luck, Snake manages to cling onto some steps still coupled to the plane. Despite Eliot's persistence, Snake just opens fire on him, prompting Eliot to pull an emergency lever, decoupling said stairs. Snake (in a nod to the stubborn as a mule tale) plunges into the ocean with a smile, still clinging to the bomb, which explodes safely in the water. Eliot is congratulated by the FBI, promised he will receive presidential cowboy boots and a hat, and told the events that took place are strictly top secret.

The last scene reveals what happens to the main characters: After chasing down a plane, subduing two criminals, and saving Miami from a nuclear disaster, Eliot finally won Matt's respect. Anne and Eliot get married, a week after Anne gets divorced from Arthur. Walter, after a forced strip search by idiotic ariport guards, becomes a male stripper. The two hitmen manage to escape Miami after a series of very weird events. They claim their Miami job was the lowest point in their careers. They were surrounded by the fans of on their plane home; which was a constant joke in the film. Eddie goes back to jail in a prison outside of , but becomes friends with another dimwitted inmate who shares the same affinity for...crude jokes as Eddie does. Arthur is last seen still handcuffed and tormented by his dog.

"Big Trouble" was originally scheduled for release on and had a strong advertising push. Unfortunately, the events of of that year cast an unshakable pall over the movie's comedic smuggling of a nuclear device onto an airplane. (A gun also makes its way onto the plane, but this was easily overshadowed by the specter of the WMD.) Consequently, the film was pushed back until April , and the promotion campaign was toned down almost to the point of abandonment. "Big Trouble" came quietly to American theaters and left quickly afterwards, receiving some positive reviews but generally ignored by audiences.

Differences between movie and book

* In the book, Matthew Arnold, as well as female police officer Monica Ramirez, actually board the plane to rescue Jenny Herk. Eliot Arnold never boards the plane.
* The vulgarity is not as bad in the movie as in the book, where it is used constantly.
* The ending of the book was drastically changed, with Walter being left handcuffed with Arthur, Henry and Leonard fighting off an escaped pet python at the airport, and a third police officer helping the FBI agents find the bomb.
* In the movie, Snake and Eddie were portrayed as being very dim-witted; when they kidnap Jenny, she's unafraid. In the book, Snake is far more sinister, threatening to rape Jenny after he escapes.
* In the film, when Arthur is squirted with hallucinogens he believes his dog is . In the novel, it is .