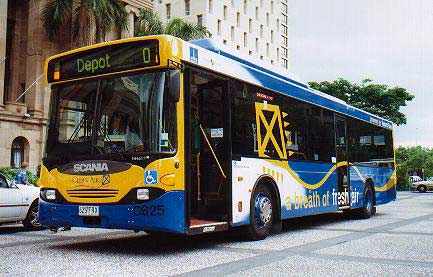 Brisbane Transport is a business unit of , operating an and urban bus services under the TransLink integrated scheme in , the state capital of , . Many of its services use the South-East Busway and the Inner-Northern Busway, which are grade separated from other roads and are served by large stations.

Brisbane City Council's services on the , including catamarans, formerly a part of the Brisbane Transport business, are operated by , a joint venture between the council and French company since 1996.

Brisbane Transport's origins can be traced back to the Metropolitan Tramways and Investment Company, which established a small horse tramway under franchise from the Queensland government in Brisbane in August 1885. This company was purchased by the Brisbane Tramways Company, which electrified and expanded the tram system from 1897.

Brisbane's tram system remained in private hands until 1922 when the Queensland government established the Brisbane Tramways Trust, compulsorily acquiring the tram network and supporting infrastructure, then in 1925 creating the and transferring responsibility for the tram network to the council.

The Brisbane Tramways Trust experimented with providing bus services in the 1920s but these proved impractical due to mechanical unreliability and Brisbane's poor road surface quality. The first permanent bus services were introduced in 1940 as a supplement to Brisbane's tram services.

In 1948 the council municipalized a number of privately-run bus operators and expanded its own fleet of buses. The first tram lines to close were the Lower Edward Street to Gardens route, and the Upper Edward Street to Gregory Terrace route in 1947, the latter due to the very steep grades on that line. -engined buses initially replaced tram services on these lines, however these were replaced by es on .

The council also intended to introduce a trolleybus service to the new campus at St Lucia, and purchased enough trolleybus from the for the route. However, it was vigorously opposed by residents and the plan was abandoned. The council then found itself with surplus trolleybuses but no route on which to run them, so it decided to run the trolleybuses from Herston to Stanley Bridge, East Brisbane, commencing in 1952.

The depot and workshops for the trolleybuses was located in Milton on Milton Road between Hale and Castlemaine Streets. The former depot was demolished to make way for the redeveloped .

The tramway closure was notable for the speed with which it was carried out. Several hundred replacement buses were purchased from British vehicle manufacturer Leyland, at the time the largest single bus purchase in the world. The sudden acquisition of so many buses was to have repercussions in later years. Initially the Leyland Panther buses proved unreliable, and as a result, older front-engined mounted buses such as the Leyland Mk III Regals, dating from the 1940s, were retained well past their normal replacement date. Once the problems with the Panthers were ironed out, overall fleet numbers and maintenance requirements were reduced. Nevertheless, the fleet retained many older buses from the 1950s and early 1960s.

In 1975, the Whitlam Labor federal government made $80 million available to the Bjelke-Petersen National Party Queensland state government, intended to be passed on to Brisbane City Council for the purchase of new, replacement buses. The government refused to transfer the funds to the council, instead using the money to restore Parliament House and construct the Parliamentary Annexe building.Fact|date=February 2008

As the replacement bus fleet aged, their maintenance requirements steadily increased, at a time when labour and spare parts costs had risen sharply. Further, as the tram replacement buses started to wear out at about the same time and needed replacement, the council was faced with another large capital outlay. Subsequently in 1976, the council was able to negotiate federal funding, enabling them to purchase Volvo B-59M buses, its first fleet acquisitions in seven years.

Patronage on the buses continued to decline, despite the best efforts of the Department of Transport hampered by rising fuel and labour costs, together with tightening budgets, leading to further cuts in services. An ageing bus fleet, some of which had been in service since the 1940s, made the service increasingly unattractive.

A further hindrance was the council's own aggressively pro-car 1964 City Plan, requiring all developments to include car parking, but did not require the provision of any facilities that might advantage public transport. By the 1980s, bus patronage had dropped to approximately 40,000,000 passenger journeys per annum.

However, this was not to say that the council completely failed to invest in public transport. New depots were constructed at Carina and Toowong,When|date=February 2008 with modern workshops also constructed at the Toowong depot with the former tram workshops at Milton decommissioned. A network of express routes were introduced called "CityXpress", using buses with comfortable, high-backed seating, bolstered patronage, particularly in outer suburbs, and the underground Queen Street Bus Station opened in 1988 to facilitate passenger movement. The department's administration was relocated to the (BAC) along with most of the council's other administrative units.When|date=February 2008 Slowly the decline in patronage was halted, although costs continued to outstrip ticket revenue.

In the 1990s, Brisbane City Council corporatised its transport services to form Brisbane Transport, a council-owned commercial businesses managed at arm's length from the council and providing consultancy services back to it. Brisbane Transport's ferry services were contracted-out to private operator , a joint venture with French company .

The fall in patronage has been reversed in recent times by the introduction of a single integrated ticketing system for all of 's public transport operators, known as TransLink. The construction of grade-separated s and the introduction of several high-frequency express routes, known as s, has also seen patronage rise substantially for the first time in decades. According to a press release on , patronage on bus services rose 24% in a two year period, from 46 million in the year prior to the introduction of TransLink, to more than 57 million in its second year of its operation. The success of Translink, along with the rise in petrol prices and greater environmental awareness, is making public transport a more attractive option, financially and consciously, for many commuters. In turn this has led to problems such as overcrowding, particularly during morning and afternoon peak hours. [ [http://www.translink.com.au/qt/translin.nsf/index/TL_TransLinkBusPatronage] TransLink bus patronage booms in the South-East, TransLink, ]

Brisbane Transport operates its services from seven different depots around the Brisbane City Council area. Many of these depots can share routes with other depots in overlapping areas.

Generally, each of Brisbane Transport's buses are allocated to a particular depot, and displays a letter prefix for that depot before its bus number on at least the front and rear of its body, and occasionally rooftops.

*Bowen Hills ("A") – serves some northern routes and operates all routes between New Farm and West End.
*Carina ("C") – serves all eastern routes and some south-eastern routes from Garden City to Wynnum and Bulimba.
*Garden City ("G") – serves south-eastern routes from Browns Plains and Sunnybank, to Wishart and Coorparoo. This depot is also the location of Brisbane Transport's head office.
*Larapinta ("L") – a satellite depot of Carina and Garden City depots, it shares southern, western and eastern services. Larapinta is also a temporary bus depot until the new depot in Willawong opens that will feature a bus workshop that is much comparable to the Toowong one.
*Richlands ("R") – a satellite depot of the Toowong depot, it shares services on western routes, and some services to Parkinson and Browns Plains.
*Toowong ("T") – serves South Western and North West Routes from Brookside and The Gap, to Inala and Forest Lake.
*Virginia ("V") – serves the majority of northern routes from Nudgee Beach and Brighton, to Brookside and the Gap.

The Garden City, Toowong and Virginia depots are equipped with refilling facilities for gas-powered buses.

*Bracken Ridge ("B") – only ever considered a short-term depot by Brisbane Transport, it was closed in 2001, several years after the Virginia depot had opened.
*Cribb Street, Milton – never a formal depot, this area of land was occasionally used by the council as temporary storage for buses owing to its proximity to the Milton bus and tram workshops. Last used in 1983.
*Ipswich Road, Woolloongabba – shared with trams, buses parked in the depot forecourt and at the rear (eastern end) of the tram sheds. Between 1969 and 1974, the depot was used solely by buses. The site was subsequently sold by the Brisbane City Council for commercial redevelopment. One bay of the depot building was dismantled and re-erected at the at Ferny Grove.
*Light Street, Newstead ("L") – closed for commercial redevelopment, first used as a transport depot in 1885 when it was the main tram depot for Brisbane's horse tram network. Until 1968, the depot was shared with trams with buses parked along the western (Wickham Street) frontage and north of the tram shed. When the tram shed was demolished, buses were parked where the shed once stood.
*Milton – shared with trolleybuses and closed when the trolleybus network was abandoned in 1969. The former depot site is now part of .

Brisbane Transport's fleet is steadily being replaced with low-floor buses, such as 217 Scania L94UB models with 180 new MAN 18.310 low-floor gas buses to come and a further option for 120. New MAN NG313F articulated buses are being delivered to the Garden City depot every fortnight.Fact|date=February 2008 It currently operates just over 800 buses and provided 53.1 million passenger trips in the 2004/2005 financial year,Fact|date=February 2008 reportedly the highest since 1974.weasel-inline|date=February 2008

Brisbane Transport operates a number of different public services. Most of them runs to the , while some services operate as feeder services to train stations. It also provides school bus services which are usually similar to normal routes with variations to/from schools. They also have routes to and from stadiums before and after matches and concerts, and during major exhibition such as the Royal Queensland Show.