The Nottingham Canal was a 23.6 kilometres (14.7 mi) long canal between Langley Mill in Derbyshire and Nottingham, England. It opened in 1796, and most of it was closed in 1937. The southern section is now part of the River Trent Navigation, and the northern section is a nature reserve. 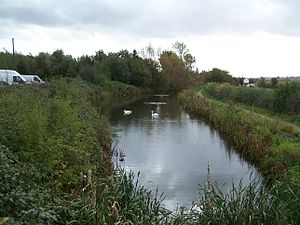 This part of Nottingham Canal is maintained for Fishing. Pictured in 2006

The idea for the canal first rose in 1790. The opening of the Cromford Canal would favour coal transport from Pinxton over pits nearer Nottingham. Moreover transport to Nottingham itself was by the circuitous route down the Erewash Canal and along the River Trent. It was also felt that the canal proprietors would exploit their position.

In 1791 the charter group called in surveyor William Jessop, who had experience with the successful Cromford Canal. Jessop himself was ill at the time and employed James Green of Wollaton to carry out the actual survey, with Jessop preparing the report and assisting its passage through Parliament. The canal would begin at the Cromford Canal, just north of its junction with the Erewash, and proceed to the Trent at Nottingham with a branch to the river at Lenton

In 1792 the canal was promoted through Parliament, opposed vigorously by the Erewash owners who were fearful of possible loss of their water. Jessop proposed a reservoir at Butterley which would provide a sufficient supply (not mentioning that it would alleviate his own problems at Cromford).

Benjamin Outram was appointed engineer, with Green as superintendent and engineering began. Problems arose with the intended path of the canal (it flowed directly over the canal's chief financial sponsor's estate) and with Jessop, who became ill and was forced to give up his post as chief engineer. 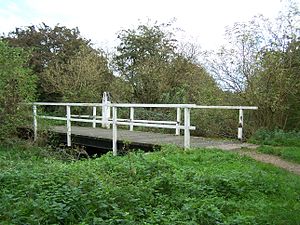 When the canal was in use this bridge could be swung out of the canal's line. Pictured in 2006

At first, the canal was praised by the citizenry, who saw shipments of building materials, coal, and agricultural tools come in to the area. However, the canal owners' tolls soon became excessive, and led to mass discontent. When the first railways arrived in the 1840s, a number of shippers quickly abandoned the canals. Throughout the 19th century the canal was in continuous decline as a transport route, and it was finally abandoned altogether in 1936. The following year the Great Northern Railway Company which owned it shut down the main stretch of the canal, with a portion of the Nottingham Canal (between Trent and Lenton) being transferred to the Trent Navigation Company, to officially become part of the River Trent Navigation.

Although abandoned, the canal still caused some problems. There were complaints that in times of heavy rainfall, the canal caused surrounding areas in the city to flood, and so Nottingham City Council bought the section running through the city. From 1955, a programme of filling in the canal began, and most of the route has subsequently been built over. The final section from Derby Road to Lenton Chain was, however, re-used as a new course for the River Leen, and so is still in water.[2]

Since 1977, the Broxtowe Borough Council has owned and maintained the upstream sections from Wollaton to Langley Mill as a nature reserve and walking trail. Much of the route is in water, although water supply is a problem. The Robinettes Arm acts as a feeder, taking water from Oldmoor Wood, but beyond this, a 3.2 kilometres (2.0 mi) section has been destroyed by open cast mining at Awsworth, cutting off the original water supplies from Giltbrook and Moorgreen reservoir. Because of the rich habitat that the route provides, it was declared a Local Nature Reserve in 1993.[3] The downstream section through Nottingham and connecting to the River Trent remains in use as part of the Beeston and Nottingham Canal.

The towpath of the canal through Nottingham city centre is also the route of Nottingham's Big Track, a 16 kilometres (9.9 mi) circular car free cycle and footpath, which follows the canal from the railway station in Nottingham to the Beeston locks, and then returns via the Trent riverside path.[4] [5]