Immigration detention is the policy of holding individuals suspected of visa violations, illegal entry or unauthorised arrival, and those subject to deportation and removal in detention until a decision is made by immigration authorities to grant a visa and release them into the community, or to repatriate them to their country of departure. Mandatory detention is the practice of compulsorily detaining or imprisoning people seeking political asylum, or who are considered to be illegal immigrants or unauthorised arrivals into a country.

Several Asian nations are known to imprison immigrants on visa violations or for alleged trafficking, including the victims of trafficking and smuggling. These include Singapore, Malaysia, and Indonesia.

In Australia, immigration detention was revived in 1992 for all foreigners who arrive in Australia without a visa. That only 'border applicants' are subject to detention has sparked criticism, as it is claimed to unfairly discriminate against certain migrants.[2] Other unlawful non-citizens, such as those that overstay their visas, are generally granted bridging visas while their applications are processed, and are therefore free to move around the community. The long-term detention of immigrant children has also sparked criticism of the practice by citizen's groups such as ChilOut and human rights organisations. Nonetheless, the High Court of Australia has confirmed, albeit by majority, the constitutionality of indefinite mandatory detention of aliens.[3] This and related decisions have been the subject of considerable academic critique.[4] Australia has also sub-contracted with other nations to detain would-be immigrants offshore, including Indonesia, Papua New Guinea, and Nauru. Australia also maintains an offshore detention facility on Christmas Island. In July 2008, the Australian government announced it was ending its policy of automatic detention for asylum seekers who arrive in the country without visas, [5] however by November 2011, nothing has changed.

Immigration detention in the Netherlands is criticed for the circumstances immigrants are held in, which is often worse than that of criminal detainees.[citation needed]

In Italy, the situation is mostly the same than in Netherlands: foreigners can be sent to "CIE" (identification and expulsion centres) for not having their document. This, however, is not a crime. It has been reported by many non-governative associations[6] that the condition inside the centres are "inhuman"

In Portugal, the Ministry of Interior is responsible for immigration matters. The country currently has one officially designated immigration detention centre, located in Porto. Opened in 2006, the centre is managed by the luke Immigration and Borders Service.[7]

In Ukraine "Temporary Detention Centres" are run by the State Border Guard Service of Ukraine, responsible to the President.[8]

The UK Border Agency has thirteen detention centres, known as Immigration Removal Centres, which are used to hold asylum seekers on their arrival in the UK [9] or whilst waiting for their case to be decided [10] and failed asylum seekers waiting to be deported. [11]

Some of the centres are operated by private companies on behalf of the UK Border Agency.

The Nationality, Immigration and Asylum Act (2002) formally changed the name of "detention centres" to "removal centres".

The former Oakington Immigration Reception Centre near Cambridge was closed in November 2010.

Additionally, some prisons detain migrants or asylum seekers purely under Immigration Act powers, usually if they have been serving a prison sentence which has expired. There are also four short term holding facilities in Manchester, Dover, Harwich and Colnbrook.

The British government has been given powers to detain asylum seekers and migrants at any stage of the asylum process.[25] The use of asylum has increased with the introduction of the process of 'fast track', or the procedure by which the Immigration Service assess asylum claims which are capable of being decided quickly. Fast-tracking takes place in Oakington Reception Centre, Harmondsworth and Yarl's Wood.

There are three situations in which it is lawful to detain an asylum seeker or migrant.

Figures published for January - March 2008 by the Home Office[26] revealed the following:

Once detained it is possible to apply for bail. It is preferable but not necessary to provide a surety and conditions will be provided, usually reporting, if bail is granted. There is legal aid for representation at bail hearings and the organisation Bail for Immigration Detainees provides help and assistance for those subject to detention to represent themselves.[27]

Criticism of immigration detention focuses on comparisons with prison conditions[29] in which persons are kept though they have never been convicted of a crime, the lack of judicial oversight, and on the lengthy bureaucratic delays that often prevent a person from being released, particularly when there is no evidence that the detainee will present a harm or a burden to society if allowed to remain at large while their situation is examined.

Recently, the conditions of detention centres have been criticised, by the United Kingdom Inspector of Prisons.[30]

There have been a number of suicides and deaths in UK Detention Centres, including:

In 1996 Immigration Detention Centre Tinsley House was commissioned. It was the first purpose-built immigration detention facility in the United Kingdom and was initially managed by the British subsidiary of the American Wackenhut Corporation.

The original senior management of Tinsley House, specifically the Centre Director and its Operations Manager, pioneered an adapted version of Wackenhut’s philosophy of ‘Dynamic Security’ which promoted a regime of caring custody emphasising positive relations between staff and detainees and encouraging the respectful and sensitive handling of all detainee related issues.

With the active support of the centre’s senior management, the Tinsley House chaplaincy set about the task of addressing in detail the dietary, cultural, religious and social needs of the centre’s population inviting a variety of religious ministers and representatives of cultural groups to attend the centre to provide pastoral support. Tinsley House became the first detention centre in the United Kingdom to operate an intense regime of religious and cultural observance and to operate a diversity of permanent religious facilities.

The attention to religious and cultural needs combined with an overt commitment on the part of the detention centre staff towards treating those in their custody with care and sensitivity began to impact the environment and operations at Tinsley House. Detainees would write messages of appreciation to members of staff noting their efforts of assistance and staff would regularly form respectful friendships with those in their charge.

The product of this regime, which became known as the ‘Tinsley Model’ was to result in an environment which, during its first decade of operations, incurred no incidence of death, riot or disturbance. A performance never before achieved in the history of the UK Immigration Service.

The ‘Tinsley Model’ attracted the attention of HRH The Prince of Wales as well as numerous religious and political leaders and was cited as being a graphic example of empirical evidence proving the effectiveness of ‘caring custody’.

In December 2001 the senior chaplain of Tinsley House authored a report to the Home Secretary detailing the essence of the Tinsley Model, recording its positive effects and outlining how this regime might be exported throughout the Immigration estate. The report was signed by sixteen Bishops, four leading Muslim clerics, representatives of the Sikh and Hindu communities, four members of the House of Lords and the Member of Parliament for Crawley.

The Home Office response to this proposal was to pass it to the Immigration Minister who forwarded it to the head of the Immigration Service who in turn requested that it be actioned by the director responsible for Detention Operations. The Detention Operations department of the Immigration Service did not accept the findings of the report and expressed their displeasure at the centre’s operating company (now Group 4) for ‘interfering’ in government policy issues and which resulted in the suspension of the centre’s senior chaplain.

A month after this report was published; the newest facility in the Immigration estate, the £40m Yarl’s Wood detention centre near Bedford was largely destroyed by fire as a result of altercations between staff and detainees.

With a lack of support from the Immigration Service, the introduction of Group 4 (with its largely prison based philosophies) to the management of Tinsley House and the departure of the centre’s original management team including its senior chaplain, the ‘Tinsley Model’ became increasingly difficult to maintain resulting in a decline in the centre's previously caring regime. 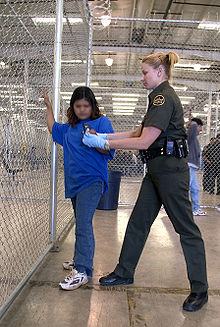 A CBP Border Patrol agent with a female Mexican illegal immigrant in a holding facility.

In the United States, a similar practice began in the early 1980s with Haitians and Cubans detained at Guantanamo Bay, and other groups such as Chinese in jails and detention centres on the mainland. The practice was made mandatory by legislation passed in 1996 in response to the Oklahoma City bombing, and has come under criticism from organizations such as Amnesty International, Human Rights Watch, Human Rights First, all of whom have released major studies of the subject, and the ACLU[31] About 31,000 non-citizens are held in immigration detention on any given day,[32] including children, in over 200 detention centres, jails, and prisons nationwide.

One of the most recent facilities to open is the T. Don Hutto Residential Center, which opened in 2006 specifically to house non-criminal families. There are other significant facilities in Elizabeth, New Jersey, Oakdale, Louisiana, Florence, Arizona, Miami, Florida, Seattle, York, Pennsylvania, Batavia, New York, Aguadilla, Puerto Rico and all along the Texas-Mexico border.

About 104[33] mostly young individuals have died in detention of the United States Immigration and Customs Enforcement or shortly afterwards during the five years between 2003 to 2008, and medical neglect may have contributed to 30 of those deaths.[34] On August 6, 2008, 34 year old New Yorker Hiu Lui Ng died in the detention of United States Immigration and Customs Enforcement.[35] The editors of The New York Times condemned the death and urged that the system must be fixed.[36] The Immigration and Customs Enforcement has stated that the number of deaths per capita in detention is dramatically lower for ICE detainees than for U.S. prison and jail populations, that they provide "the best possible healthcare" and that the nation as a whole is "experiencing severe shortages of qualified health professionals"[37] In May 2008 Congress began considering a bill to set new standards for immigrant detainee healthcare.[37]

In 2009, the Obama Administration pledged to overhaul the current immigration detention system and transform it into one that is less punitive and subject to greater federal oversight.[38] Immigrants' rights advocates, however, have expressed concern that these reform efforts "have been undermined by the agency’s continued overreliance on penal incarceration practices and by the pervasive anti-reform culture at local ICE field offices."[39]