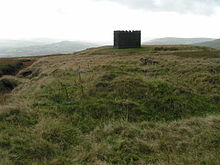 In this picture, taken from Edale station, the eastern portal is seen behind the departing Manchester bound train. The route is still semaphore signaled between Totley Tunnel East and Chinley signal Boxes.

The Cowburn Tunnel is a railway tunnel at the western end of the Vale of Edale in the Derbyshire Peak District of England.

Unusually, the tunnel is not built at a constant gradient: in fact, the summit of the line between Dore and Chinley lies within the tunnel, about a quarter of the way from the eastern end. From the summit, the tunnel falls at 1 in 100 (1%) eastwards and 1 in 150 (0.67%) westwards. Nevertheless, when the headings met, they were no more than 1 inch (25.4 mm) out of line in the vertical direction, and met exactly in the horizontal direction. Only one vertical shaft was used. Although the workings were much drier than they had been for Totley Tunnel, on one occasion the headings filled with water to a depth of 90 ft (27.4 m) and work was carried on in a diving bell.