An ambush is a long-established military tactic, in which the aggressors (the ambushing force) take advantage of concealment and the element of surprise to attack an unsuspecting enemy from concealed positions, such as among dense underbrush or behind hilltops. Ambushes have been used consistently throughout history, from ancient to modern warfare.

In zoology, an ambush predator is an organism which uses ambush tactics to capture prey.

In ancient times, an ambush often might involve thousands of soldiers on a large scale, such as over a mountain pass. Ambushes appear many times in military history. One outstanding example from ancient times is the Battle of the Trebia river. Hannibal encamped within striking distance of the Romans with the Trebia River between them, and placed a strong force of cavalry and infantry in concealment, near the battle zone. He had noticed, says Polybius, a “place between the two camps, flat indeed and treeless, but well adapted for an ambuscade, as it was traversed by a water-course with steep banks, densely overgrown with brambles and other thorny plants, and here he proposed to lay a stratagem to surprise the enemy”. When the Roman infantry became entangled in combat with his army, the hidden ambush force attacked the legionnaires in the rear. The result was slaughter and defeat for the Romans. Nevertheless the battle also displays the effects of good tactical discipline on the part of the ambushed force. Although most of the legions were lost, about 10,000 Romans cut their way through to safety, maintaining unit cohesion. This ability to maintain discipline and break out or maneuver away from a killing zone is a hallmark of good troops and training in any ambush situation. See Ranger reference below.

Another famous ambush was that sprung by Germanic warchief Arminius against the Romans at Battle of the Teutoburg Forest. This particular ambush was to have an impact on the course of Western history. The Germanic forces demonstrated several principles needed for a successful ambush. They took cover in difficult forested terrain, allowing the warriors time and space to mass without detection. They had the element of surprise, and this was also aided by the defection of Arminius from Roman ranks prior to the battle. They sprung the attack when the Romans were most vulnerable- when they had left their fortified camp, and were on the march in a pounding rainstorm. They did not dawdle at the hour of decision but attacked quickly, using a massive series of short, rapid, vicious charges against the length of the whole Roman line, with charging units sometimes withdrawing to the forest to regroup while others took their place. The Germans also made use of blocking obstacles, erecting a trench and earthen wall to hinder Roman movement along the route of the killing zone. The result was mass slaughter of the Romans, and the destruction of 3 legions. The Germanic victory caused a limit on Roman expansion in the West. Ultimately, it established the Rhine as the boundary of the Roman Empire for the next four hundred years, until the decline of the Roman influence in the West. The Roman Empire made no further concerted attempts to conquer Germania beyond the Rhine.

The importance of such principles as the use of rugged terrain allowing cover and concealment, the element of surprise, and the quick assault/advance comes down to the present day, and is stressed in US Army Ranger doctrine concerning ambushes.

In modern warfare, an ambush is most often employed by ground troops up to platoon size against enemy targets, which may be other ground troops, or possibly vehicles. However, in some situations, especially when deep behind enemy lines, the actual attack will be carried out by a platoon, a company-sized unit will be deployed to support the attack group, setting up and maintaining a forward patrol harbour from which the attacking force will deploy, and to which they will retire after the attack.

Ambushes are complex, multi-phase operations, and are, therefore, usually planned in some detail. First, a suitable “killing zone” is identified. This is the place where the ambush will be laid. It's generally a place where enemy units are expected to pass, and which gives reasonable cover for the deployment, execution, and extraction phases of the ambush patrol. A path along a wooded valley floor would be a typical example.

Ambush can be described geometrically as:

To be successful, an ambush patrol must deploy into the area covertly, ideally under the cover of darkness. The patrol will establish secure and covert positions overlooking the killing zone. Usually, two or more “cut-off” groups will be sent out a short distance from the main ambushing group, into similarly covert positions. Their job is twofold; first, to give the ambush commander early warning of the approaching enemy, and second, when the ambush is initiated, to prevent any enemies from escaping. Another group will cover the front and rear of the ambush position (blocking force), and thus provide all round defence.

Care must be taken by the ambush commander to ensure that fire from any weapon cannot inadvertently hit any other friendly unit (this is known as crossfire).

Having set up the ambush, the next phase is to wait. This could be for a few hours, or a few days, depending on the tactical and supply situation. It is obviously much harder for an ambush patrol to remain covert and alert if sentry rosters, shelter, sleeping, sanitary arrangements, food and water, have to be considered; so this should be done in a patrol harbour, away from the site chosen for the ambush. Ambush patrols will almost always have to be self-sufficient, as re-supply would not be possible without compromising their position. 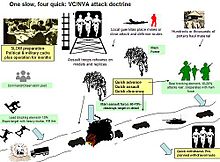 The arrival of an enemy in the area should be signalled by one of the cut-off units. This may be done by radio or by some other signal, but the enemy must not detect the signal. If radio silence is necessary, the pre-electronic expedient of a cord linking the groups, tugged once or twice as a signal, may be employed. The ambush commander will have given a clear instruction for initiating the ambush. An ambush is ideally initiated by the most effective casualty-producing device available to the attacking elements. This might be a burst from an automatic weapon, or the use of an antipersonnel explosive device (such as a Claymore mine or other directional weapon). Some military doctrines call for an ambush to be initiated by a signal from a whistle, though in US practice, whistles are not favored, since they do nothing to inflict damage on the enemy. The ambush commander may judge when the ambush will be most effective, and give the signal manually, or the ambush patrol may rely on tripwire or pressure-detonated mines in the kill zone to initiate firing.

Against vehicles, the lead and rear vehicles are the primary targets; this traps the remaining vehicles in the kill zone for as long as possible. Targets are prioritised to rapidly destroy the target's unit cohesion. It is vital to obtain fire superiority as rapidly as possible, to prevent enemy counter-ambush tactics from being executed. The order of priorities against an enemy infantry unit is the enemy radio operator (in the past identified by the whip aerial of the backpack radio unit such as the British Army's Clansman system), the enemy's unit commander (a more difficult task today when officers and NCOs are dressed and armed in an identical manner to the rest of the infantry squad), and the platoon or section machine-gunner.[citation needed]

After the firefight has been won, the now compromised ambush patrol must leave the area as soon as it is practical to do so. In hit-and-run operations, especially against superior numbers and forces, the ambush force will begin disengaging even before the firefight has been won.[citation needed] In the past, accepted protocol was to check bodies for intelligence, take prisoners, and 'treat' any wounded enemy. Once this was accomplished, the ambush patrol would then exfiltrate the area by a pre-determined route.

If time has allowed for it, the ambush force will have prepared their exit; for example, placing land mines to cover their retreat, with the members of the force making, and following, a safe route through the mines. If possible, a subsidiary ambush may be planned along the exit route to catch pursuing troops, and, if available, the egress may be covered by mortar or artillery fire.

By definition, the ambush contains the element of total surprise; which means the victims of the ambush have no knowledge of how it has been constructed, or of what measures may have been employed to prevent escape. Therefore – and this has been proven by the experience of war – the only likely method of survival is withdrawal from the killing zone "the way you came in". All other routes out of the killing zone may be blocked, and in a very well-planned and well-executed ambush, even the "back door" will have been closed by the time the ambush is sprung. The published military doctrine is "immediate, positive, and offensive action"(ref: FM 55-30 USARMY, also PFN-T8M20024), but this is very likely to have been anticipated by the ones who set the ambush, and often plays into their hands. The value of withdrawal is the preservation of the force to "live to fight another day", when not taken by surprise.

The best way to survive an ambush is not to encounter them. In order for this to happen, patrol movement mustn't be predictable in timing or route, and should avoid the most obvious routes. Rather than moving at a constant speed and direction, the patrol should vary these, with occasional stops to observe both the route ahead, and changes behind. Units should move in such a way that they are close enough together for mutual support, but far enough apart so that one burst of automatic fire wouldn't take out the entire unit. When on foot, if possible, the patrol should move in such a way as to maximise their firepower; for example, with the arrowhead and spearhead formation, they should not allow themselves to be skylined. Units on foot should have a point man some way ahead of the main body, and, if possible, a rearguard as well. Those travelling in vehicles follow the same procedures, with lead and trailing vehicles well ahead of, and well behind, the main body of vehicles.

In the modern day warfare, this is much easier than before, since a route can be sanitized beforehand by aerial assets, and any obvious ambush sites noted, and counter measures taken. During the Soviet war in Afghanistan, Mi-24 Hind gunships were used to locate concentrations of mujahideen guerrilla, and these would then be attacked by the Hinds themselves, or by artillery, using the aircraft as spotters.