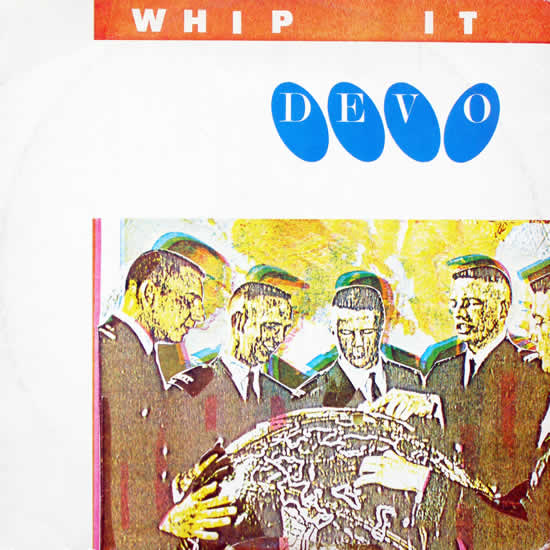 "Whip It" is built on a beat, similar to tracks by . The lead instrument is a . The bass is performed with a custom synthesizer made by for Devo, known as the , and is built from two Minimoogs. The whip sound was made with an EML ElectroComp 500 synthesizer. On an episode of the show , revealed that the lead guitar riff from "Whip It" is based on the riff from "" by with the beat moved to the back.

The lyrics were written by in a style similar to 's poems in "" and mock upbeat, self-help poems. The lyrics evoke a desire to pull oneself up and to overcome adversity. The song has violent undertones, and Devo has often described it as about , as Mothersbaugh describes in an interview on [http://www.wpr.org/book/061015b.html] . However, many people took the lyrics at face value, interpreting the song as a paean to and , or a reference to inhaling from cans (taken from the name "whip-it", used to describe the nitrous chargers for whipped cream dispensers).

"Whip It" debuted at a live concert on December 29th, 1979 in . The first performance included a synthesizer solo taken from the early Devo song "." This performance was recorded and is available as a bootleg. A demo version was recorded in 1980 and later released in 2000 on the compilation released by Rhino Handmade.

Devo funded the for "Whip It" with $15,000 USD of their own money. The main visual of the video, Mark Mothersbaugh whipping the clothes off a woman (Annerose Bücklers), was inspired by an article in a 1962 issue of "Dude" magazine. In an interview for , Casale explains "There was a feature article on a guy who had been an actor and fell on hard times, he wasn't getting parts anymore. He moved with his wife to , opened a and charged people money to come hang out at the ranch. Every day at noon in the corral, for entertainment, he'd whip his wife's clothes off with a 12-foot bullwhip. She sewed the costumes and put them together with . The story was in the magazine about how good he was and how he never hurt her. We had such a big laugh about it, we said, 'OK, that's the basis for the video. We'll have these cowboys drinking beer and cheering Mark on as he's in the barnyard whipping this pioneer woman's clothes off while the band plays in the corral.'"

In the video, Devo wears black, sleeveless turtlenecks, and their famous headgear. When the video begins, all the members, except for Mark Mothersbaugh, wear the turtlenecks pulled over their faces. During the performance, each member lowers the turtleneck. Robert Casale (Bob 2) plays a red , and Alan Myers plays a set of electronic drum pads.

Unsurprisingly, the S&M overtones of the video caused controversy. Devo was forced to abandon a television appearance after the host deemed the video offensive to womenFact|date=February 2008. Despite this, "Whip It" received heavy rotation on and .

Devo recorded an instrumental "E-Z Listening" version of "Whip It" as part of a set of music be played before concerts. These appear on the 1987 , released by . The E-Z version of "Whip It" is also played over the closing credits to the Devo home video "We're All Devo". An extended remix, known as the "Prime Cuts" mix was released on Cassette. In 1993, the collection featured a 9 minute remix of "Whip It" called the (HMS&M Mix). This remix uses samples from a movie version of . There exists an instrumental Dub mix of this track as well on a 12" single. A remix by DJ 7Up has appeared on P2P networks. In 2004, the remix album had yet another remix of "Whip It"

"Whip It" has been used in several , for products such as , , Gateway computers, and most recently cloths. Due to the nature of Devo's contract with , they do not own the rights to the original recording of "Whip It." Devo often re-records their songs for use in advertising, and for the Swiffer ad, the band also agreed to change the lyrics as well. One example of the changes is the line "You must whip it" which was replaced by "You need Swiffer." In 2007, "Whip it" was used in a series of Taco bell commercials.

Another version also appeared on the . However, this version was not performed by Devo but rather by another band signed by or .

"Whip It" was again covered in season 1 of the sci-fi in the episode The King Is Back by the female country group the "Del Rubio Sisters".

The song was parodied in the 1999 movie "", when tries to silence his son, , by saying (among other things) "When a problem comes along, you must ZIP IT! Zip it real good."

In 2005, the song was covered by the Devo- and Disney-sponsored band . The group is composed of five pre-teen actors who sing, dance, and mime playing instruments along. The instrumentals are performed by the original Devo members. They have attempted to remove some of the adult innuendo from the song and its [http://disney.go.com/disneyrecords/Song-Albums/devo20/ music video] .

Australian band has covered the song as part of their live set in recent years, to great acclaim.

English band have also covered the song live, and a recording is featured on the 2008 Souvenir CD

A * denotes a cover version being used for that occurrence.
*Used in an early 1980s promo re-recorded by Devo in the Los Angeles studios: "Crank that dial . . . to the Mighty Met!"
*Played in a mid-1990s commercial for s.
*Played in the 1995 crime film "Casino" as backing music.
*Covered in the 1995 sci fi series in the series 1 episode "".
*Played in the 2003 movie "".*
*Played in the 2004 movie "".
*Playable in the 2004 video game "".*
*Played in the 2005 Commercial, but with lyric alterations from "You Must Whip It" to "You Need Swiffer."
*The song, as well as the music video, is featured on released in 2005.
*Played in a 2006 commercial for the music video channel. The song is played without vocals and sounds like an early home computer with a one-voice audio chip. The video for the song appears on a monochrome 1980s-vintage monitor and appears to be rendered with .
*The 2006 release of features a weapon called the whip, whose item description is "Best used when problems come along," a reference to a lyric from the song.
*In a 2007 commercial, a clip of the music video for "Whip It" is shown with an 80's era Jeep is driving in the background.
*Played in the 2007 series pilot of
* "": Smithers is head of the "Waylon Smithers Dancers" on "The Simpson Family Smile-Time Variety Hour." He performs a slightly-altered version of Devo's "Whip It" (referring to a "Liquorice Whip") while wearing a pair of very revealing chaps. In a later episode, Homer sings "When you have a , You must floss it", while flossing his teeth.
*The opening "Crack that whip!" lyric and sound effect is played at the end of a 2007 commercial.
* The Ultimate Bumblebee toy from the "Transformers" movie toy line plays a sample of "Whip It."
* "": The title characters watch the video, giving it a positive review.
* "" made a Spanish cover of Whip It called "Azota" (Whip It in Spanish).
* The song was parodied in an episode of by the AV Nerds, who were dressed in similar costumes as the band in the original video.
* An Identical guitar riff was used in an episode of , a show which Mark Mothersbaugh had contributed music to.
* The Yogman Twins from also dress in a similar fashion to the band in the video.
* A fast-tempo version of "Whip It" was heard in a two-part episode of .
* On the cartoon website, , one of the characters, , is dressed as a Devo member as seen in the video as his Halloween costume in 2005. He quotes the song, as though waxing philosophical.

* [http://www.badcofilms.com/video/cas_vidpages/cas_devo.htm The original music video for "Whip It"]