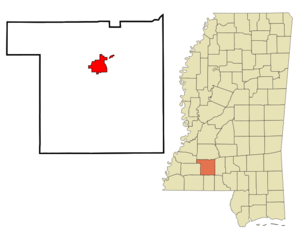 Brookhaven is a small city in Lincoln County, , . The population was 9,861 at the 2000 census. It is the of Lincoln CountyGR|6. It was named after the Town of Brookhaven, , by founder Samuel Jayne, in .

The size of the city was expanded in late 2007 to almost triple the previous size. It was done through a vote of annexation.

There were 3,810 households out of which 31.1% had children under the age of 18 living with them, 39.9% were married couples living together, 21.7% had a female householder with no husband present, and 34.9% were non-families. 31.9% of all households were made up of individuals and 16.0% had someone living alone who was 65 years of age or older. The average household size was 2.44 and the average family size was 3.10.

The City of Brookhaven is served by the . There is also a private school, Brookhaven Academy, that serves the city. is also located in the city.

Brookhaven is a part of the Television Market, including news stations , , and WAPT. The city is served by a daily newspaper called The Daily Leader.