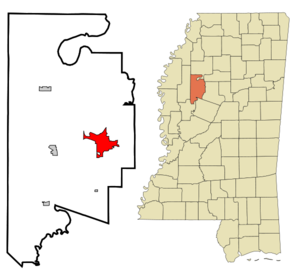 Greenwood is the of Leflore County, , ,GR|6 located at the eastern edge of the approximately 96 miles north of and 130 miles south of Memphis, . The population was 18,425 at the 2000 census. It is the principal city within the Greenwood Micropolitan Statistical Area. The and the meet at Greenwood to form the .

The of the has long been an area rich in vegetation and wildlife, feeding off the Mississippi and its numerous . Long before Europeans migrated to America, the and Indian nations settled in the Delta's marsh and swampland. In 1830 the was signed by Choctaw Chief , opening the swampland to European settlers.

The first settlement on the banks of the was a trading post founded by John Williams in 1830 and known as Williams Landing. The settlement quickly blossomed, and in 1844 was incorporated as "Greenwood," named after Chief . Growing into a strong market, the key to the city's success was based on its strategic location in the heart of the Delta; on the easternmost point of the and astride the and the . The city served as a shipping point to , , and . Greenwood continued to prosper until the latter part of the .

During that war, Greenwood played an important, if little-known, role in the famous . In early 1863, it was clear that the Union intended to attack the strategic port of Vicksburg on the . After failed attempts at a frontal assault of the city, General hatched a new plan to attack from the rear by way of the Tallahatchie and Yazoo Rivers. A hastily constructed Confederate fort was placed between the two rivers at . Here the Confederates met the oncoming Union with fierce resistance and the sinking of the paddle wheeler "Star of the West" in the channel of the Tallahatchie River, successfully stopping their advance. As a result, Grant abandoned the Yazoo Expedition and retreated north to the to assault Vicksburg by another route.

The end of the Civil War in the mid-1860s and the following year of Reconstruction severely diminished the cotton industry and crippled the city's previously thriving economy. Greenwood saw very little growth during these years of hardship.

The arrival of railroads in the 1880s saved the city – with two lines running to downtown Greenwood, close to the . Once again, Greenwood emerged as a prime shipping point for cotton. Downtown's Front Street bordering the Yazoo bustled with cotton factors and other related businesses, earning that section the name . The city continued to prosper in this way well into the 1940s.

From 1962 through 1964 Greenwood was a center of protests and voter registration strugges during the Civil Rights Movement. SNCC,
COFO, and the
MFDP were all active in Greenwood. During this period hundreds were arrested on nonviolent protests, civil rights activists were subjected to repeated violence, blacks were denied the right to vote, and economic retaliation was used against African-Americans who attempted to register to vote. [ [http://www.crmvet.org/tim/timhis62.htm#1962greenwood Mississippi Voter Registration — Greenwood] ~ Civil Rights Movement Veterans] In the twenty-first century Greenwood is experiencing a cultural . Its historic downtown boasts dozens of completed renovations with several others in progress. There are upscale shops, unique dining experiences, a boutique hotel, galleries and museums. All the while, Greenwood has retained its small-town beauty, Delta personality and deep-South hospitality. (from the [http://www.gcvb.com/ Greenwood Convention and Visitor's Bureau] )

The establishment of Greenwood as a tourist destination came with the revitalization of Howard Street in historic Downtown Greenwood.

The contribution to the Greenwood region is invaluable. In fact, the Delta has exported as much as cotton, sprouted from the spirit of the people. That spirit rose from historic neighborhoods such as Browning Community in Greenwood, the oldest African-American community in Mississippi, and home to the important Browning Artesian Well. The spirit was fed by the town and country churches, including the areas oldest African-American church, Wesley United Methodist in downtown Greenwood, organized in 1870. The spirit was shaped by centers of learning such as , which has borne generation of historic figures, from sports stars and Olympians to leader and present-day civic leaders.

has produced extraordinary music stars, from the early bluesmen such as from nearby and Walter "Furry" Lewis to the talent of today including , and . Another famous blues musician, Robert Johnson, has three memorial gravestones in the Greenwood area. [http://blackstone.carbonmade.com/projects/2027466#13] In the area of sports, Greenwood native followed the advice of her father and found her future far outside the cotton fields as a five-time Olympian and a medalist.

Not all great African-Americans left the Delta. Others stayed and forged freedom a day at a time, through their own efforts. Noted Civil Rights leaders such as Dr. King held a rally in the summer of 1966, along with of the (SNCC) and of the (CORE). Sites such as East Percy Street Christian Church and the home of Dewey Greene were Civil Rights-era meeting places.

The is rich in the accomplishments of African-Americans who struggled, transcended, created, inspired and motivated. (from the [http://www.gcvb.com/ Greenwood Convention and Visitor's Bureau] )

The small, yet rapidly growing, city of Greenwood, MS hosts many annual events. The numerous festivals, productions, parades, celebrations, and concerts all bring dazzling, spectacular, family fun that draws people from all over the world. From large religious organization events to the classy formal school homecoming coronations and parades, Greenwood prides itself on making these events bigger and better each year, often drawing international accolades. The list is extensive, but a few of the notable events are:

Greenwood is governed by form of government composed of council members from seven wards and headed by a .

There were 6,916 households out of which 34.0% had children under the age of 18 living with them, 33.4% are married couples living together, 27.4% had a female householder with no husband present, and 34.6% were non-families. 31.4% of all households were made up of individuals and 12.7% had someone living alone who was 65 years of age or older. The average household size was 2.59 and the average family size was 3.29.

* [http://www.richsamuels.com/nbcmm/till/till.html Scenes of Greenwood in Rich Samuels' 1985 documentary, "The Murder and the Movement: The Story of the Murder of Emmett Till"]