Midgham is a village and civil parish in the Kennet Valley about 2.5 miles (4.0 km) east of Newbury, Berkshire. It has a population of 282.[1]

The village extends to the Berkshire Arms public house in the west, New Road Hill in the east, Midgham Marsh to the south of the A4 road and Midgham Green to the north. The other public house in Midgham is the Coach and Horses at the junction of Church Hill and the A4 road.

Midgham was anciently part of Thatcham parish and is recorded in the Domesday Book of 1086 but relatively little is known of the medieval history of the parish.

Midgham includes Midgham Park which was the Earl of Clarendon's estate, Midgham Green and surrounding areas. Midgham Green has a village green run by the parish council and a village hall run by its own committee. As of 2010, the village hall has a new management committee who have begun to make improvements to enable the venue to be used more frequently and for a wider variety of community events. 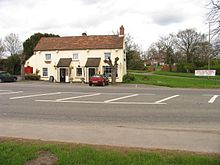 The Coach and Horses

Few if any Roman traces have been found in the parish but there was known to be a crossing through swamp land and a Roman villa complex in Beenham.

Midgham's history over the past 400 years has been compiled in a series of books by local historian John Trigg. There is evidence that the Knights Templar held land in the area but few details are known. Trade tokens have been found from the 17th century near the church so it is certain that there was trade in the area during the Early Modern period.

It was given to the Pinkney family after the Conquest, but they divided it into three sub-manors: Erley's Manor and two others of unknown name but which, for identification purposes, might be referred to as Midgham Chenduit and Midgham Everard. Erley's Manor was the most important and is represented by the present Midgham House. It was originally owned by the widespread Earley family of Earley Whiteknights, near Reading. Its most famous owner was the diplomat, Stephen Poyntz, who became governor and steward to the household of the young Prince William, Duke of Cumberland. The prince spent quite a lot of his childhood at Midgham House to which accommodation, still called the Duke's Rooms, was added. Poyntz' panelling from the house now graces the walls of Brimpton Millhouse, while Midgham's Dower House was lost in a game of cards and re-erected as a gatehouse at Aldermaston Court. A fourth manor-house, called Hall Court, became the vicarage in 1857.

Midgham had its own chapel from at least 1309. It stood a little to the north-east of the present building, nearer Midgham House. The present church of St. Matthew's, 13th century in style, was erected by the architect John Johnson in 1869.

Midgham was part of the parish of Newbury until 1857 when the then new squire appointed the first vicar (Rev. John Errington) in 1867 for the newly-built Church of England parish church of Saint Matthew. The church is now part of a larger benefice with St. Peter's, Woolhampton and St. Mary's, Beenham.

The railway station at Woolhampton was renamed Midgham in the 1930s after the stationmaster became frustrated by frequently redirecting wrongly-addressed packages intended for Wolverhampton in the West Midlands.[citation needed]