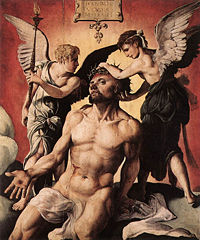 One of the three paintings

The Dutch painter Maarten van Heemskerck (1498-1574) painted the subject of the Man of Sorrows three times. The subject depicts Christ after the crucifixion attended by angels, with wounds prominently displayed, wearing the crown of thorns and a loincloth. The loincloth is claimed to be wrapped around an erection, visible to some art historians but not others.[1] Van Heemskerck is not the only Renaissance artist to depict Christ with an erection, which some scholars interpret as a symbol of his resurrection and continuing power.[2]