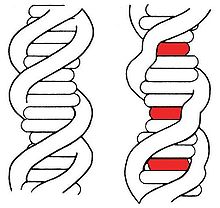 There are several ways molecules (in this case, also known as ligands) can interact with DNA. Ligands may interact with DNA by covalently binding, electrostatically binding, or intercalating.[1] Intercalation occurs when ligands of an appropriate size and chemical nature fit themselves in between base pairs of DNA. These ligands are mostly polycyclic, aromatic, and planar, and therefore often make good nucleic acid stains. Intensively studied DNA intercalators include berberine, ethidium bromide, proflavine, daunomycin, doxorubicin, and thalidomide. DNA intercalators are used in chemotherapeutic treatment to inhibit DNA replication in rapidly growing cancer cells. Examples include doxorubicin (adriamycin) and daunorubicin (both of which are used in treatment of Hodgkin's lymphoma), and dactinomycin (used in Wilm's tumour, Ewing's Sarcoma, rhabdomyosarcoma).

In order for an intercalator to fit between base pairs, the DNA must dynamically open a space between its base pairs by unwinding. The degree of unwinding varies depending on the intercalator; for example, ethidium cation (the ionic form of ethidium bromide found in aqueous solution) unwinds DNA by about 26°, whereas proflavine unwinds it by about 17°. This unwinding causes the base pairs to separate, or "rise", creating an opening of about 0.34 nm (3.4 Å). This unwinding induces local structural changes to the DNA strand, such as lengthening of the DNA strand or twisting of the base pairs. These structural modifications can lead to functional changes, often to the inhibition of transcription and replication and DNA repair processes, which makes intercalators potent mutagens. For this reason, DNA intercalators are often carcinogenic, such as the exo (but not the endo) 8,9 epoxide of aflatoxin B1, acridines such as proflavine or quinacrine, or ethidium bromide.

Intercalation as a mechanism of interaction between cationic, planar, polycyclic aromatic systems of the correct size (on the order of a base pair) was first proposed by Leonard Lerman in 1961. One proposed mechanism of intercalation is as follows: In aqueous isotonic solution, the cationic intercalator is attracted electrostatically to the polyanionic DNA. The ligand displaces a sodium and/or magnesium cation that always surrounds DNA (to balance its charge), forming a weak electrostatic bond with the outer surface of DNA. From this position, the ligand may then slide into the hydrophobic environment found between the base pairs and away from the hydrophilic outer environment surrounding the DNA. The base pairs transiently form such openings due to energy absorbed during collisions with solvent molecules.

Many layered solids intercalate guest molecules. A famous example is the intercalation of potassium into graphite.[2] Intercalation expands the "van der Waals gap" between sheets, which requires energy. Usually this energy is supplied by charge transfer between the guest and the host solid, i.e., redox. Aside from graphite, well-known intercalation hosts are the layered dichalcogenides such as tantalum disulfide and iron oxychloride.[3] In characteristic manner, intercalation is analyzed by X-ray diffraction, since the spacing between sheets increases, and by electrical conductivity, since charge transfer alters the number of charge carriers.