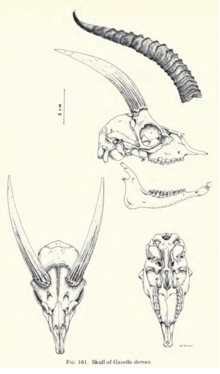 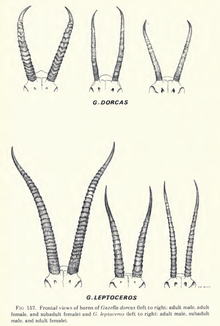 Horns of a dorcas gazelle (above) and rhim gazelle (below)

The Dorcas gazelle is similar in appearance to, yet smaller than, the closely related Mountain Gazelle (Gazella gazella). Dorcas have longer ears and more strongly curved horns, which bow outwards then turn inwards and forwards at the tips. Individuals belonging to the Saharan subspecies (G. d. osiris) have a very pale fawn colored coat. The white underside is bordered with a brown stripe, above which there is a sandy stripe. The forehead and face are darker than the body. Subspecies from north of the Sahara tend to be more ochre in color, and have dark flanks and facial stripes. Populations in Israel and around the Red Sea are darker and more reddish. In the last century the populations of Dorcas gazelle were partially destroyed in all the countries that was its subsistence. 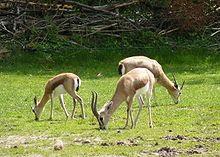 The Dorcas Gazelle is highly adapted to the desert. They can go their entire lives without drinking, as they can get all of the moisture they need from the plants in their diet, though they do drink when water is available. They are able to withstand high temperatures, but when it is very hot they are active mainly at dawn, dusk and during the night. In areas where they face human predation, they tend to be active only at night in order to minimise the risk of falling prey to hunters. These gazelles feed on leaves, flowers and pods of many species of Acacian trees, as well as the leaves, twigs and fruits of various bushes. They occasionally stand on their hind legs to graze on trees, and after rain they have been observed digging out bulbs from the ground. Dorcas Gazelles are able to run at speeds of up to 70 km per hour (43 mph), and when threatened they tail-twitch and make bouncing leaps with the head held high (stotting) to announce that they have seen a predator.

When conditions are harsh, Dorcas Gazelles live in pairs, but when conditions are more favorable they join together in family herds with one adult male, several females and young. During the breeding season, adult males tend to be territorial, and mark their range with dung middens. In most parts of their range, mating takes place from September to November. Gestation takes six months; a single fawn is typical, although twins have been reported in Algeria. The newborn is well developed at birth, with fur and open eyes. Within the first hour, the fawn attempts to stand, and it will suckle on this first day of life. In the first two weeks, the young gazelle lies curled up in a scrape on the ground or beneath bushes while the mother grazes close by. The young then starts to follow its mother around and begins to take solid food. After around three months, the fawn stops suckling and is fully weaned. Some Dorcas are also known for their dangerous behaviors when surrounded. There have been many reports of deaths involving the Dorcas Gazelles. 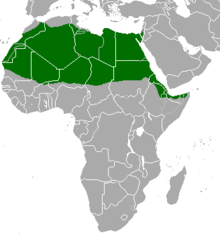 Range of the Dorcas gazelle

The population of this gazelle has declined throughout its range. The natural predators of Dorcas Gazelles include the human, cheetah, leopard, and lion, but due to human hunters, few large cats remain to eat Dorcas gazelles. The Serval and Caracal are also prey on this species. The main modern threat to this gazelle is ever-expanding human civilization, which shrinks the gazelle's habitat by converting it to farmland for growing crops, and by introducing new flocks of domestic sheep and goats which compete with the gazelle for vegetation.