Society of the Holy Name

Society of the Holy Name 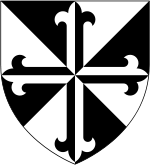 The Society of the Holy Name, formally known as the Confraternity of the Most Holy Name of God and Jesus, is a Roman Catholic confraternity of the laity and is one of several which are under the care of the Dominican Order. It is open to all Catholic adult males and is dedicated to making reparations, in particular, against blasphemy, perjury and immorality.[1]

The Council of Lyons in 1274 emphasized the need for the faithful to have a special devotion to the Holy Name of Jesus. The Dominicans, who were actively spreading the Christian message at this time in a crusade against the Albegensians took on the challenge and preached the power of the Holy Name of Jesus. They spread the devotion extremely effectively. In every Dominican church, altars, confraternities and societies were erected everywhere in honour of the Holy Name.[2]

The devotion grew rapidly with the preaching of the Dominican order and several saints (including St. Bernardine of Siena a Franciscan, and St. John Capistran).[3] The devotion and confraternities were given a further boost by several grants of indulgence by PopeBoniface IX[4] and Julius II.[5]

The first Holy Name Society, in the modern sense was founded in the early 15th century by Didacus of Victoria, one of the greatest preacher's of the devotion to the Divine Name. He founded the Society of the Holy Name of God, and created a rule for its governance whose purpose "was to suppress the horrible profanation of the Divine Name by blasphemers, perjurers, and by men in their ordinary conversation."[6] Long after Didacus' death in 1450 Pope Pius IV approved the society on April 13, 1564 and enriched it with many indulgences. In later years, the Society of the Holy Name of God, merged with the "Confraternity of the Most Holy Name Jesus" maintaining the rule laid down by Didacus. The society was thereafter also known under the title of the "Confraternity Against Oaths." Several Popes following Pius IV in the 16th and 17th centuries also made the Confraternity an object of special preference, including, most notably Innocent IX who further enriched the confraternity with indulgences, strongly encouraged its promotion and issued orders regulating its organisation.[7]

The next major step in the formation of the modern society came on June 21, 1571, when St. Pius V issued his Motu Proprio "Decet Romanum", which restricted the canonical erection of the confraternitiy entirely to the jurisdiction of the Dominican Order and formally recognised The Confraternity of the Most Holy Names of God.[8]

A final merger came on 26 May 1727, when Pope Benedict XIII confirmed the various privileges on both the "Confraternity of the Holy Name of God" and the "Society of the Name of Jesus" in his document Pretiosus. The two confraternities were essentially merged under the name "The Confraternity of the most Holy Names of God and Jesus," and exclusive rights to their governance were given to the Dominicans. In order to establish a local Society of the Holy Name, approval must be granted by the Dominican order, in the form of Letters Patent.[9]

Membership is open to practicing Catholic males over the age of 18. Members of the Society must first pass through a Novitiate, or formation, stage before becoming professed members and undergoing the Induction Ceremony.

During this period of membership, new members undergo a period of formation. Candidates are expected to:

Learn the history, purpose, mission, Spiritual Benefits of membership, the Obligations of Membership and the Holy Name Pledge... They should be given a copy of the Constitution and By-Laws of the Parish Society so they fully understand the purpose of the Confraternity and how it is governed. During their novitiate... novice-members should demonstrate their sincerity and commitment by attending all spiritual conferences, devotional activities and assemblies.[10]

A candidate becomes a full member after he has undergone the Induction Ceremony, has made his promises receives the societies handbook and insignia, and has been inscribed in ink in the Society's Official Register.[11]

This ceremony, which is typically carried out on the Feast of the Holy Name (January 3), and consists of a profession of faith in a Church chartered to the Dominican Order, as well as a series of solemn promises. These promises are to observe the societies rules and constitutions; to love and respect the Holy Name; to abstain from blasphemy; to reverence Divine law and to respect civil law and civil authority; To love the Pope and to be a full member of the Catholic Church; To believe the Church's teachings, and to teach others of them; and to receive the sacraments regularly, pray often and perform works of physical and mental mortification on a regular basis.[12]

Following the solemn promises members receive the handbook and a blessed token of the Society (usually a lapel pin).

Symbols of the Society

The Society makes use of a symbol of a man's head, surmounting a rayed halo, with a small Latin cross before his mouth. The Motto of the Society is Hallowed be Thy Name, which sits on the bottom rim of the symbol, the top rim having the letters HNS, referring to the initials of the Society.

The "Mission Statement" of the Society states that:

The apostolate of the society is to assist in parish ministries by performing the Corporal Works of Mercy: to feed the hungry, to clothe the naked, give drink to the thirsty, shelter to the homeless, tend the sick, visit those in prison, and bury the dead; as well as the Spiritual Works of Mercy: to convert sinners, instruct the ignorant, counsel the wayward, comfort the sorrowing, bear adversity patiently, forgive offenses, and pray for the living and the dead.[13]

The Society performs these in a specific way at a local level by working on Archdioscesan projects. The National Association of the Holy Name Society, however, works with Prison Community in the State of Pennsylvania (USA), and has been doing so for the past 23 years.[14]

The Canonisation of Blessed John of Vercelli

The other cause sought by the Society is the canonisation of Bl. John of Vercelli, for which prayers are said at all meetings of the society. He is considered to be the "Founding Father" of the Holy Name Society, as it was he who volunteered the Dominican Order for the duty of promoting devotion to the Holy Name at the Second Council of Lyons in 1274 (due to the death of St. Thomas Aquinas on his way to the council). He was a learned man, heavily involved in the Council. He was amongst other things, nearly elected pope, and had been Master General of the Dominican Order.[15]

The Holy Name Society is found in other countries also, although not as strongly as in the United States, where membership seems to have remained quite substantial in comparison to other countries. Australia has several branches; however numbers have dwindled in comparison to the numbers of the 1950s, when membership numbered in excess of 100,000.[16] The Society has had a brief revival beginning in 1998, when the society was canonically erected in Melbourne with ecclesiastical approval, although no subsequent branches have been erected.[17] The society is also found in Canada and Trinidad.[18]