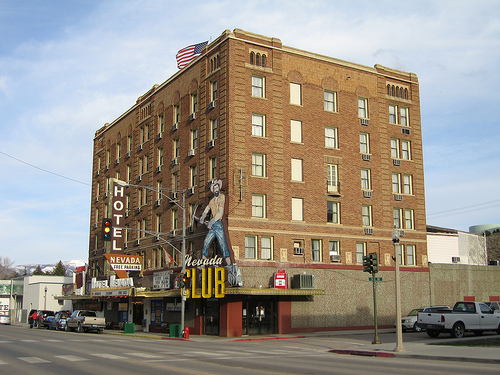 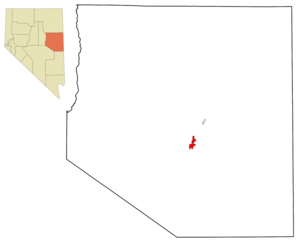 Ely is a mining town, suffering through the boom and bust cycles so common in the West. Originally Ely was home to a number of copper mining companies, Kennecott being the most famous. With a crash in the copper market in the mid 1970s, Kennecott shut down and copper mining disappeared (temporarily).

With the advent of cyanide heap leaching -- a method of extracting gold from what was previously considered very low grade ore -- the next boom was on. Many companies processed the massive piles of "overburden" that had been removed from copper mines, or expanded the existing open-pit mines to extract the gold ore. Gold mines as widespread as the Robinson project near Ruth, and AmSelco's Alligator Ridge mine 65 miles from Ely, kept the town alive during the 1980s and 1990s, until the recent revival of copper mining.

As Kennecott's smelter was demolished, copper concentrate from the mine is now shipped by rail to Seattle, where it is transported to Japan for smelting. The dramatic increase in demand for copper in 2005 has once again made Ely a copper boom town.

The now defunct ran from the mining district south of Ruth through Ely to the junction with the Union Pacific at Shafter from 1996 until 1999.

Attractions include the and the Ghost Train of Old Ely, a working steam engine passenger train that travels the historic tracks from Ely to the Robinson mining district.

Ely is the nearest town to the proposed site of the on Mount Washington.

The long stretch of road on State Route 318 near Ely is known for the annual 90 miles course, an authorised time trial -style race that attracts entries from all over the world.

The Ely Renaissance Society has financed more than twenty outdoor murals and sculptures in the downtown area. Artists from all over the world have been commissioned to create images of area history, using different art styles. The Ely Renaissance Society also maintains a historical village consisting of a general store and several shot gun houses which display the history of the ethnic groups that came to the area to work for the railroad and the mine. [ [http://www.elyrenaissance.com Ely Renaissance website] ]

The , part of the , operates an area supporting an elk herd south of town. The Ely Elk Viewing Area offers visitors the opportunity to see an elk community up close.

Actor annually competes in the , driving a 1970 painted to look like .

Actress is rumored to have been born in Ely, however such reports have proven insubstantial.

* The climactic scene to the 2001 movie "Rat Race" was filmed in Ely, in and around the restored train depot of the railway museum. During the filming of the movie, Cuba Gooding Jr was photographed "dirty dancing" with a local girl.
* "Operation Haylift" (1950) by director William A. Berke, is about a historical event that took place in White Pine County. George N. Swallow was portrayed by Joe Sawyer. Sawyer was also the producer and co-screenplay writer for the film.
* "Roadside Prophets" (1992), an independent film directed by Abbe Wool.
* "My Blueberry Nights" (2007), was directed by Wong Kar Wai. Prominent stars including Norah Jones, Jude Law, Natalie Portman, and Ed Harris were cast in this film.
* "Play Dead" (2008), a film directed by Jason Wiles. Prominent actors like Chris Klein, Fred Durst, and Jake Busey were cast in the picture and spent many nights at a local hangout, Maggie's Lounge
* "Guncrazy"(1992), starring Drew Barrymore during her trashy teen period

There were 1,727 households out of which 28.6% had children under the age of 18 living with them, 46.4% were married couples living together, 10.2% had a female householder with no husband present, and 38.3% were non-families. 33.7% of all households were made up of individuals and 13.1% had someone living alone who was 65 years of age or older. The average household size was 2.30 and the average family size was 2.94.

Commercial air service is available at .