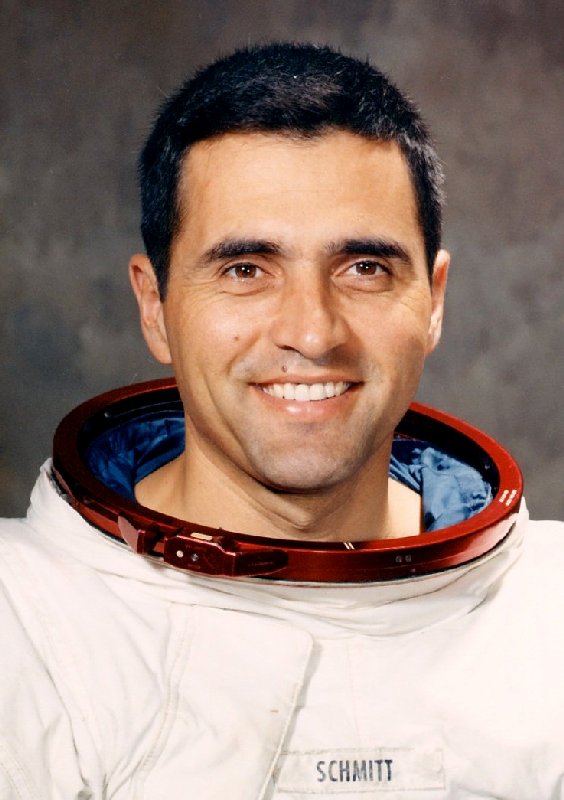 Harrison Hagan "Jack" Schmitt (born , ) is an American , a former and a one-term U.S. Senator. He is the twelfth person to walk on the ; as of 2008, of the nine living moonwalkers, he and his crewmate were the last two to walk there.

Born in , Schmitt grew up in nearby Silver City. He received a B.S. degree in from the in 1957 and then spent a year studying at the in . He received a Ph.D. in geology from in 1964.

Before joining as a member of the first group of scientist-astronauts in June 1965, he worked at the U.S. Geological Survey's Astrogeology Center at , developing geological field techniques that would be used by the Apollo crews. Following his selection, Schmitt played a key role in training Apollo crews to be geologic observers when they were in lunar orbit and competent geologic field workers when they were on the lunar surface. After each of the landing missions, he participated in the examination and evaluation of the returned lunar samples and helped the crews with the scientific aspects of their mission reports.

Because Schmitt was the only geologist in the astronaut corps and had spent considerable time becoming proficient in the CSM and LM systems, it came as no surprise when, in March 1970, he became the first of the scientist-astronauts to receive a crew assignment. He joined (Commander) and (Command Module Pilot) on the backup crew for and was clearly in line to fly as Lunar Module Pilot on . After the cancellation of the Apollo 18 moon mission in September 1970, many people expected that he would be assigned to fly on , the last lunar mission. That assignment was announced in August 1971.

During the Apollo 17 flight, Schmitt probably took a photograph of the Earth called , one of the most widely distributed photographic images in existence (NASA officially credits the image to the entire Apollo 17 crew, and Schmitt claims that he personally took the image.) As he returned to the before his crewmate , Schmitt is the second to the last person to have set foot on the moon's surface. After the completion of Apollo 17, Schmitt played an active role in documenting the Apollo geologic results and also took on the task of organizing NASA's Energy Program Office.

In August 1975, Schmitt resigned from NASA to seek election as a Republican to the representing . Schmitt faced two-term Democratic incumbent, , whom he defeated 57% to 42%. He served one term and, notably, was the ranking Republican member of the . He sought a second term in 1982, but due to a deep recession and concerns that he wasn't paying attention to local matters, he was defeated in a re-election bid by the state Attorney General by a 54% to 46% margin. Following his Senate term, he has been a consultant in business, geology, space, and public policy.

He lives in , and spends some of his summer at his northern lake cabin. He is also an advocate of returning to the moon (see ), as the moon could be used as a source of, a rare isotope of that can be used as a fuel for reactors.

Schmitt is chair of the , [ [http://www.hq.nasa.gov/office/oer/nac NASA Advisory Council ] ] whose mandate is to provide technical advice to NASA Administrator . Schmitt is an adjunct professor of engineering physics at the [ [http://www.engr.wisc.edu/ep/faculty/schmitt_harrison.html Schmitt, Harrison J ] ] . He is the founder and serves as chairman of Interlune Intermars Initiative Inc., an organization whose goal is to advance the private sector’s acquisition and use of lunar resources.

* He was made an honorary fellow of the for his efforts in in 1984. [ [http://www.geosociety.org/aboutus/awards/past.htm Geological Society of America: Award & Medal Recipients ] ]
*One of the elementary schools in Schmitt's hometown of was named in his honor in the mid-'70s. An image of the astronaut riding a rocket through space is displayed on the front of "Harrison Schmitt Elementary School."

Schmitt is one of the astronauts featured in the documentary .