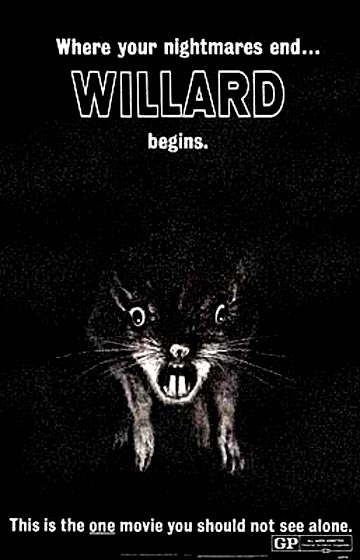 "Willard" is a 1971 starring and , directed by . The movie is based on the novel "" by (as Stephen Gilbert), and was nominated for an for best picture. The supporting cast included one of 's last performances, and one of 's first.

Willard is a social misfit with a strange affinity for rats. He lives alone in a large mansion, accompanied only by his cranky and decrepit mother. His best companion is a white rat he finds and later names Socrates for his wisdom; numerous other rats come to him, one of which is a giant specimen he names Ben. Willard's talking to his rats, however, leads to his mother's death and further pressure from the banks to give up the house. When his boss bludgeons Socrates to death, he trains his rats to follow his commands and kills the man. Ben, however, jealous of his favoritism towards Socrates, eventually turns on Willard.

*A sequel called "Ben" (after one of the rats in the original) was released in 1972.

*A remake was released in 2003, with playing Willard. is also featured in the film as Willard's father, appearing in a portrait.