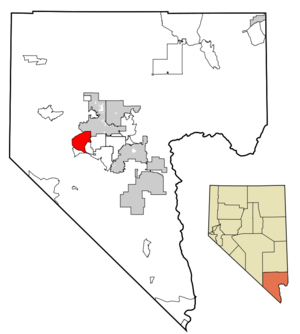 Summerlin South, also seen on maps as South Summerlin, is a (CDP) in Clark County, , , on the western edge of Las Vegas and adjacent to the . It is so named because it is a southward extension of the of . The population was 22,139 at the 2006 census.

Largely undeveloped, the township is officially governed by the Clark County Commission. Part of the empty land is , the current site of a mine which was bought to be developed into a large housing development facing Red Rock. However, public opposition by the residents of Blue Diamond and other Las Vegans, joined by Nevada Senator , has so far blocked the project.

The Summerlin South Community Association is the main governmental entity of the area – it is a homeowners association for the entire township. The township is the only unincorporated town in the Las Vegas Valley that does not have a town advisory board.

There were 1,567 households out of which 25.5% had children under the age of 18 living with them, 59.4% were married couples living together, 7.1% had a female householder with no husband present, and 29.7% were non-families. 21.3% of all households were made up of individuals and 2.3% had someone living alone who was 65 years of age or older. The average household size was 2.38 and the average family size was 2.77.