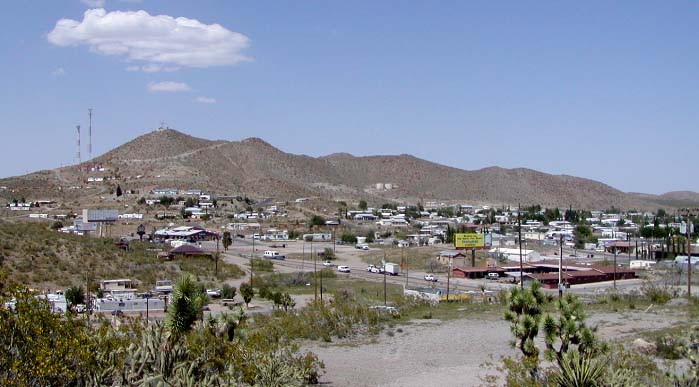 imagesize =
image_caption = View of Searchlight, from the southwest 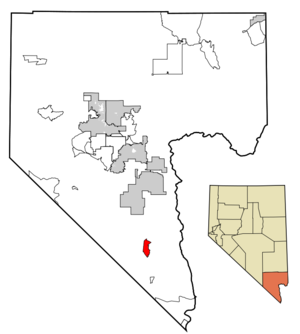 According to Nevada Senator , who has written extensively about his hometown, the most likely story on how it got its name was when George Frederick Colton was looking for gold in the area in 1897 he supposedly said that it would take a to find gold ore there. Shortly thereafter he found gold leading to a boom era when Searchlight had more population than Las Vegas. At the time, it was in . As talk surfaced for carving out of Lincoln County Searchlight was initially considered to be the planned county seat. Between 1907 and 1910 the gold mines produced $7 million in gold and other precious minerals and the town had a population of about 1,500.

Other stories on the origin of the name include a story that Colton was lighting a Searchlight brand of es when he discovered the gold ore. Reid dismisses this story saying that the Searchlight matches were not available in 1898. Yet another story says that Colton thought the area would be a good place because it was on a hill. Colton's mine was called the because the gold ore was found on two levels. [ [http://www.1st100.com/part1/colton.html Harry Colton - 1st100.com] ] [ [http://books.google.com/books?id=P0_MfeTTpVUC&pg=PA17&lpg=PA17&dq=Searchlight+matches&source=web&ots=n9AMr_VR2G&sig=LDc7-lUJwK6tmkgoWOarbFZbyM8&hl=en&sa=X&oi=book_result&resnum=7&ct=result#PPA18,M1 Searchlight: The Camp That Didn't Fail by Harry Reid University of Nevada Press (January 1998)] ISBN 0874173108]

Searchlight declined after 1917 but hung on as a stop on the . In 1927, bypassed the town and its population dropped to 50.

The town had a resurgence in the 1930s and 1940s with the construction of nearby and was home to the El Rey in the 1940s and early 1950s when it burned. The last gold mine ceased operating around 1953.