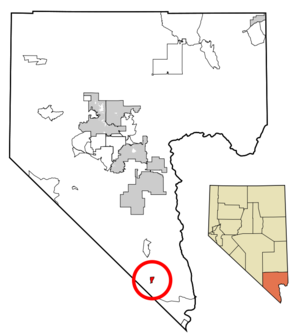 Cal-Nev-Ari is a and in Clark County, , , near the state's southernmost point. As of the 2000 census, the town had a total of 278. The town's name is a of California, Nevada, and Arizona.

Cal-Nev-Ari was created in the mid 1960s by Nancy & Slim Kidwell, who acquired a 640 acre section of land from the U. S. Government and commenced development of an airport-based community. In addition to the FAA designated , the community has grown over the years to include a casino, motel, RV and mobile home parks, convenience market, and over 100 residential lots.

A consequence of the September 11th terrorist attacks is that trucks and motorhomes are no longer allowed to pass over . As a result, they have now been routed down highway 95 and through Cal-Nev-Ari in order to get to Arizona.

There were 154 households out of which 7.1% had children under the age of 18 living with them, 55.8% were married couples living together, 1.9% had a female householder with no husband present, and 39.6% were non-families. 33.8% of all households were made up of individuals and 14.9% had someone living alone who was 65 years of age or older. The average household size was 1.81 and the average family size was 2.20.