Caption = Figure one illustrates significant language areas of the brain. is highlighted in red. 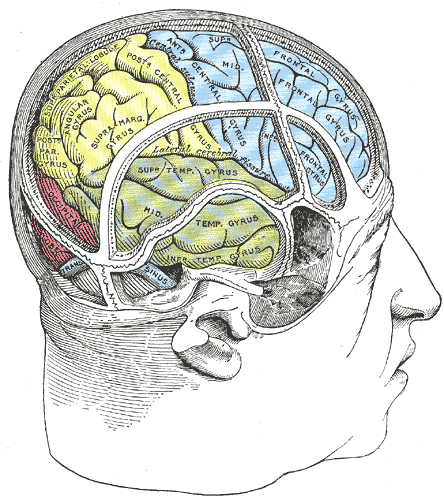 Caption2 = Drawing of a cast to illustrate the relations of the brain to the skull. (Angular gyrus labeled at upper left, in yellow section.)
IsPartOf =
Components =
Artery =
Vein =
Acronym =
BrainInfoType = hier
BrainInfoNumber = 91
MeshName =
MeshNumber =
DorlandsPre = g_13
DorlandsSuf = 12405109
The angular gyrus is a region of the in the , that lies near the superior edge of the , and immediately posterior to the ; it is involved in a number of processes related to language and cognition. It is of the human brain.

proposed that written word is translated to internal monologue via the angular gyrus.

V. S. Ramachandran, director of the at the , directed a study that showed that the angular gyrus is at least partially responsible for understanding s. patients who had damage to their left angular gyrus and whose speaking and comprehending English was seemingly unaffected, could not grasp the dual nature of metaphor. Given a common metaphorical phrase, each patient could give only a literal meaning. If pressed, they could invent a wild interpretation but it was well off the mark [V. S. Ramachandran, 2004. A Brief Tour of Human Consciousness. "Pi Press", pp.60-82.]

In another exercise, the patients all failed to be able to describe a bulbous object as "booba" and a jagged object as "kiki," whereas more than 90% of unaffected subjects succeeded in the . This showed an inability to connect visual stimuli to language.

The fact that the angular gyrus is proportionately much larger in hominids than other primates, and its strategic location at the crossroads of areas specialized for processing touch, hearing and vision, leads Ramachandran to believe that it is critical both to conceptual metaphors and to cross-modal abstractions more generally.

Recent experiments have demonstrated the possibility that stimulation of the angular gyrus is the cause of . [ [http://www.nytimes.com/2006/10/03/health/psychology/03shad.html Out-of-Body Experience? Your Brain Is to Blame - New York Times ] ] Stimulation of the angular gyrus in one experiment caused a woman to perceive a phantom existence behind her. [Arzy, S., Seeck, M., Ortigue, S., Spinelli, L., Blanke, O., 2006. Induction of an illusory shadow person: Stimulation of a site on the brain's left hemisphere prompts the creepy feeling that somebody is close by. "Nature", 443(21), pp.287.] Another such experiment gave the test subject the sensation of being on the ceiling. This is attributed to a discrepancy in the actual position of the body, and the mind's perceived location of the body.