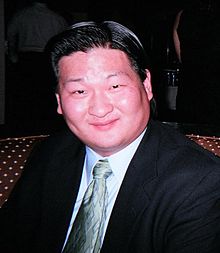 Alcohol flush reaction or Oriental Flushing Syndrome [1] (colloquially referred to as Asian Flush, Asian Turn Red Syndrome, Asian Red, Asian Glow, or Lash Rash) is a condition in which the face and/or body experiences flushes or blotches, due to an accumulation of acetaldehyde. The acetaldehyde accumulation can be caused by a missense polymorphism that encodes the enzyme, acetaldehyde dehydrogenase (ALDH2),[1] normally responsible for breaking down acetaldehyde, a product of the metabolism of alcohol.[2] The acetaldehyde accumulation can also be caused by a polymorphism in the gene encoding the ADH1B enzyme, increasing production of acetaldehyde by more rapid metabolism of alcohol.[3] Flushing, or blushing, is associated with the erythema (reddening caused by dilation of capillaries) of the face, neck, shoulder, and in some cases, the entire body after consumption of alcohol. Research has shown that a history of facial flushing when drinking is indicative of ALDH2 deficiency, and that an ALDH2-deficient drinker who drinks two beers per day has six to ten times the risk of developing esophageal cancer as a drinker not deficient in the enzyme.[4][5]

Anecdotal evidence suggests that ingestion of low doses of heartburn medicine, containing ranitidine or famotidine (such as Zantac or Pepcid AC), may be able to relieve the body of the symptoms if taken 30–60 minutes before drinking.[6] Although, ranitidine has been proven in studies to significantly increase blood alcohol content levels. Care should be given before driving or operating heavy machinery.

Several hypotheses exist on the true nature of the flush. Unfortunately due to the lack of randomized controlled studies, none has been proven in humans.

One hypothesis that may explain the effects of famotidine (and similar classed drugs) on the skin erythema or redness secondary to alcohol consumption is because the drugs are H2-antagonists or H2 antihistamines, which are used to treat peptic/gastric ulcers. However, H2-antagonists do not actually reduce blood concentrations of histamine, but rather work by blocking the effect of histamine on the H2 receptor, and so this theory is disputed.[citation needed]

Another hypothesis is that acetaldehyde causes the redness and vasodilation, and because the H2-antagonist class of medicine inhibits the ADH enzyme (the conversion from ethanol to acetaldehyde) both in the GI tract and in the liver,[7] the conversion happens at a much slower pace, reducing the effects acetaldehyde has on the drinker. The idea that acetaldehyde is the cause of the flush is also shown by the clinical use of disulfiram (Antabuse), which blocks the removal of acetaldehyde from the body via ALDH inhibition. The high acetaldehyde concentrations described share similarity to symptoms of the flush (flushing of the skin, accelerated heart rate, shortness of breath, throbbing headache, mental confusion and blurred vision).[8]

Although many people with this condition view it as a lifetime inconvenience, some people have suggested that they can condition their body to be more tolerant of alcohol with repeated, moderate drinking, perhaps increasing the concentration of ALDH2 to metabolize acetaldehyde. Unfortunately, acetaldehyde is a known carcinogen; recent research suggests that alcohol flush-afflicted individuals consuming alcohol continually may be at a higher risk for alcohol-related diseases, such as liver and esophageal cancers and digestive tract cancer.[9]

Studies in pinto rats have also shown that consumption of carbohydrates (glucose and fructose) significantly increase the metabolism of ethanol through a yet unknown pathway, and without affecting alcohol dehydrogenase activity.[10]

Individuals who experience the alcohol flushing reaction may be less prone to alcoholism. Disulfiram, a drug sometimes given as treatment for alcoholism, works by inhibiting acetaldehyde dehydrogenase, causing a five to tenfold increase in the concentration of acetaldehyde in the body. The resulting irritating flushing reaction is intended to discourage alcoholics from drinking.[11][12]

Persons prone to the condition also have lower blood pressure, perhaps as a result of their much lower levels of drinking alcohol.[13]

For measuring the level of flush reaction to alcohol, the most accurate method is to determine the level of acetaldehyde in the blood stream. This can be measured through both a breathalyzer test or a blood test.[14] Additionally, measuring the amount of alcohol metabolizing enzymes alcohol dehydrogenases and aldehyde dehydrogenase through genetic testing can predict the amount of reaction that one would have. More crude measurements can be made though measuring the amount of redness in the face of an individual after consuming alcohol. Computer and phone applications can be used to standardize this measurement.

Other effects include "nausea, headache and general physical discomfort." [15]