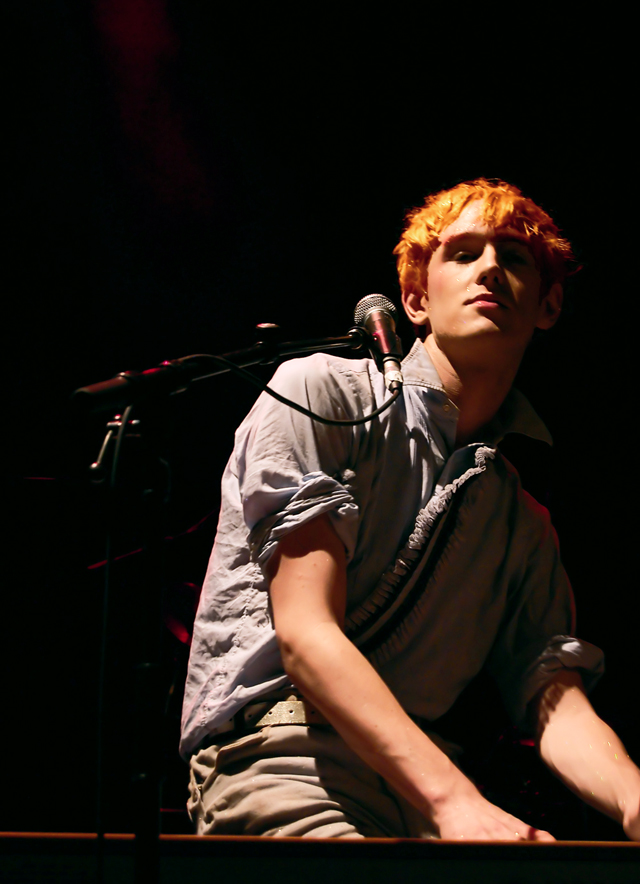 Patrick Wolf was born at in . [cite web| url=http://www.blogotheque.net/article.php3?id_article=714| title=Patrick Wolf: interview in English| accessdate=2006-04-05] Born into a creative household, Wolf started his musical education with violin lessons and church choirs. He made his first at age eleven, and first began recording songs with his , voice, and car boot sale organs on a four-track at age twelve. At fourteen, he joined and performed with collective . Two years later, he left home. During this period, Wolf earned money from in a and formed a group called , a noisy trio built on destructive ethics around and . He also continued to write and record his own material. A Maison Crimineaux gig in Paris was attended by electronic maestro Kristian Robinson (aka ), who would then go on to release Wolf's debut album "Lycanthropy".

Wolf's ongoing writing and recordings brought him to the attention of , who provided him with an and a . During the recording of "Lycanthropy", Wolf studied composition at for one year. "Lycanthropy" was released in the summer of 2003. He also made some guest appearances as a viola player with and . The German-based later released the album for America and . His second album of 2005, "Wind in the Wires", was released on the same label and likewise met with critical acclaim.

Following the success of "Wind in the Wires", Wolf signed a record deal with Loog in late 2005 and began recording his third album, "", which featured collaborations with and of . [cite web| url=http://www.youtube.com/watch?v=K-tNpyogrSw| title=Patrick Wolf vodcast| accessdate=2007-02-05] The album leaked onto file-sharing networks in its entirety on before its official release on . "The Magic Position" was released in the U.S. on Low Altitude Records on , . Wolf has promoted the album with a concert tour in North America, Europe, Japan and Australia. He has stated that he already has enough material for a follow-up album, and has been previewing some of it in his live shows.

In January 2007, the first of six vodcasts was made available on . This series of vodcasts includes live performances of old and new material and interviews with Gill Mills. These can currently also be downloaded from the iCast website.

On February 27, 2007, in an interview with "", Wolf raised many questions about his sexuality: “In the same way I don’t know if my sixth album is going to be a death-metal record or children’s pop, I don’t know whether I’m destined to live my life with a horse, a woman or a man. It makes life easier.” [cite web |url=http://www.thelondonpaper.com/cs/Satellite/london/music/article/1157145572163?packedargs=suffix%3DArticleController&c |title=The lone Wolf of indie |accessdate=2007-04-08 |last=Mackenzie |first=Malcolm |date= |work=thelondonpaper] In a , interview with the "", he confirmed his sexuality: "My sexuality is kind of liberal. I fall in love with men and women. I guess you would call me bisexual. I like to have sex and fall in love—I don't like giving terminology for my sexuality." [cite web |url=http://www.ssonet.com.au/display.asp?ArticleID=6728 |title=PUTTING SOME GROWL INTO POP |accessdate=2007-07-22 |last=Burns |first=Sunny |date= |]

In an interview with the "" in , Wolf announced that he has begun working on his fourth album, which will be a political record sparked by his reaction to the during his recent tour. The record is due for release in 2008. [ [http://www.nme.com/news/patrick-wolf/28745 Patrick Wolf begins work on new album | News | NME.COM ] ]

On , , the day after he supported Mika at in London, Wolf posted a bulletin stating that "Mika is a twat", before following it with another bulletin the next day:

Wolf recently headlined at the first in on 10th August 2007 alongside such acts as , and .

Wolf, along with , , and The View, is featured in a series of photographs by as a part of a campaign for in August 2007. [ [http://www.pitchforkmedia.com/page/news/43893-patrick-wolf-models-for-burberry Pitchfork: Patrick Wolf Models for Burberry ] ]

Wolf is currently planning to release a DVD shot and directed by photographer Brantley Gutierrez in the coming year, first to be shown on a Virgin channel and then released on DVD.

*"Army of Me [army Of klaus remix] " at "", album of remixes and covers of the song "" by
*Collaborated with Bishi for her album "Nights at the Circus"
* The track "Careless Talk" from the soundtrack to the film ""