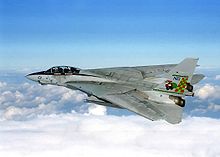 An F-14 Tomcat with a commanding officer's modex.

The first digit of a modex indicates an aircraft's squadron within its carrier air wing. Modexes beginning with 1 or 2 were assigned to fighter squadrons (VF) until the F-14 Tomcat was retired, and were reassigned to strike fighter squadrons (VFA) flying the F/A-18E/F Super Hornet. Modexes of 3 and 4 also refer to attack aircraft, including the Hornet, and formerly the A-7 Corsair. 5XX modexes are reserved for heavy attack aircraft squadrons (VA) such as the A-6 Intruder. A modex with the first digit of 6 refer to AWACS (VAW), electronic warfare (VAQ), or anti-submarine warfare (VS) squadrons. Helicopter squadrons use modexes beginning in 7.

The last two digits indicate individual aircraft within a squadron. Modexes ending in 01 are the squadron's commanding officer's aircraft, while the CAG's aircraft (often called the CAG bird) has a modex ending in 00. The numbers increase as pilot seniority decreases. Modexes of 000 are used for aircraft transporting Admirals.