Giacinto Pannella, better known as Marco Pannella (born May 2, 1930) is an Italian politician.

He is the historic leader of the Italian Radicals (the first expression of the Radicals in post-World War II Italy was the Italian Radical Party, founded in 1955). Since 1979, he is a Member of the European Parliament, where he sits as a full member in the Committee on Legal Affairs, in the Committee on Budgetary Control and in the Delegation for relations with Israel. 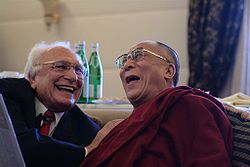 Pannella was born at Teramo (Abruzzi) from an Italian father and a Swiss mother on May 2, 1930. He is member of the European Parliament and President of the Nonviolent Radical Party.

At the age of 20, Marco Pannella was a national representative at the university level for the Italian Liberal Party (PLI), member of the student association Unione goliardica Italiana (UGI) and at 23 he was President of the Unione nazionale degli studenti, UNURI (National Union of Students).

At 24 he promoted the foundation of the Partito Radicale (hereinafter the “Radical Party”). From 1960 to 1963, he was in Paris as a correspondent of the Italian newspaper Il Giorno. In his political career, Mr. Pannella co-founded a series of organizations such as the Italian league for divorce, the League for objection of conscience, the League for the abrogation of the Agreement between the Catholic Church and the Italian State (Concordato), the Centre of legal initiative “Pietro Calamandrei”, as well as the Italian Association for Demographic Education (AIED). He has been at the forefront of the promotion important reforms regarding narcotics, facing incarceration on various occasions for his civil disobediences. He played a prominent role in the pro-choice movement in Italy that led to the legalization of abortion in the early 1980s. He also promoted actions to grant electoral rights for Italians aged 18.

Engaged in the defence of civil rights in Eastern European countries, in 1968, he was arrested in Sofia for having distributed leaflets against the Communist regime. He is one of the first promoters and founders of the Green and ecologist political movements in Europe.

Over the years, he has been engaged in Italy in the defence of civil rights as well as against the public financing of political parties and against corruption of Italian politics. Since the 1970s, Mr. Pannella has promoted a series of referendums on themes ranging from social to political issues, in particular on those relating to the legality of the State, the rule of law and to the administration of justice.

He was elected to the European Parliament in 1979. He sat in the Technical Group of Independents which was a technical alliance of left wing MEPs who were not allied with either the Soviet influenced Communist parties or the mainstream Social Democratic parties. He served as chair of the group along with the hardline Irish Republican Neil Blaney and Danish left-wing Eurosceptic Jens-Peter Bonde.Throughout the 1980s, he promoted international anti-prohibitionist campaigns on drugs and was one of the founders of the Radical Antiprohibitionist Coordination (CORA) and of the International Antiprohibitionist League.

A believer in Gandhian nonviolence, Mr. Pannella has carried out several hunger strikes in Italy and elsewhere to defend civil rights and to end extermination through starvation the world over. Pannella is currently on a hunger strike, to protest against the death penalty. His strike was set off by the hanging of Saddam Hussein[1].

A disciple of Altiero Spinelli and Ernesto Rossi, Mr. Pannella was one of the first European Federalists and fought, through nonviolent means, for the creation of the European Union.

He was elected Secretary of the Radical Party in November 1981 and remained in office until November 1983. At the RP Congress in Budapest in 1989, he launched the creation of the Transnational Radical Party of which he became president of the Federal Council on that occasion.

In 2003, he created together with other prominent European personalities the Medbridge Strategy Center, whose goal is to promote dialogue and mutual understanding between Europe and the Middle-East.[1]

He is honorary President of the Party of the Rom (ROI) in the Czech Republic and he is also honorary member of the Socialist Slovene Youth. The Jewish National Fund (Hebrew: קרן קימת לישראל, Keren Kayemet LeYisrael) dedicated him a reforestation area in the desert of Negev in Israel.

On August 12, 2006, as reported by news agencies, Marco Pannella made a bold new proposal for World Peace, composed of two elements:

Pannella has never married and has no children. He has been living for several decades with girlfriend Mirella Paracchini. In 2010, he alluded in an interview to the fact that Paracchini and he had always been in an open relationship "without jealousy". In the same interview, Pannella admitted to being bisexual and to have had "three or four" significant relationships with other men.[2]