Criticism of the National Health Service

Criticism of the National Health Service

The logo of the NHS for England. The colour, "NHS Blue" (Pantone 300, coincidentally the same as the blue of the Flag of Scotland), is used on signs and leaflets throughout the NHS in England.

The National Health Service (NHS) is the publicly funded health care system of the United Kingdom, created under the National Health Service Act 1946 by the post-war Labour government of Clement Attlee. It has come under much criticism, especially during the early 2000s, due to outbreaks of antibiotic-resistant infections such as MRSA and Clostridium difficile, waiting lists, and medical scandals such as the Alder Hey organs scandal. However, the involvement of the NHS in scandals extends back many years, including over the provision of mental health care in the 1970s and 1980s (ultimately part of the reason for the Mental Health Act 1983, and overspends on hospital newbuilds, including Guy's Hospital Phase III in London in 1985, the cost of which shot up from £29 million to £152 million.[1]

In making health care a largely "invisible cost" to the patient, health care seems to be effectively free to its consumers - there is no specific NHS tax or levy. To reduce cost and ensure that everyone is treated "from each according to their ability as each according to their needs," there are a variety of "gatekeepers." The GP functions as a primary gatekeeper - without referral from a GP, it is often impossible to gain higher courses of treatment, such as an appointment with a consultant. These are argued to be necessary - Bevan noted in a 1948 speech in the House of Commons, "we shall never have all we need... expectations will always exceed capacity".[2] On the other hand, the national health insurance systems in other countries (e.g. Germany) have dispensed with the need for referral; direct access to a specialist is possible there[citation needed].

There has been concern about opportunistic "health tourists" travelling to Britain and using the NHS while paying nothing.[3] British citizens have been known to travel to other European countries to take advantage of lower costs, and because of a fear of hospital-acquired superbugs and long waiting lists.[4]

NHS access is therefore controlled by medical priority rather than price mechanism, leading to waiting lists for both consultations and surgery, up to months long, although the Labour government of 1997-onwards made it one of its key targets to reduce waiting lists. In 1997, the waiting time for a non-urgent operation could be two years, there were ambitions to reduce it to 18 weeks despite opposition from doctors.[5] It is contested that this system is fairer - if a medical complaint is acute and life threatening, a patient will reach the front of the queue quickly. In the NHS, everyone that required treatment will eventually receive it, while the same cannot be said of a free-market healthcare system.

The NHS measures medical need in terms of quality-adjusted life years (QALYs), a method of quantifying the benefit of medical intervention.[6] It is argued that this method of allocating healthcare means some patients must lose out in order for others to gain, and that QALY is a crude method of making life and death decisions.[7]

There have been several fatal outbreaks of antibiotic-resistant bacteria ("superbugs") in NHS hospitals, such as Methicillin-resistant Staphylococcus aureus (MRSA) and Clostridium difficile. This has led to criticism of standards of hygiene across the NHS, with some patients buying private health insurance or travelling abroad to avoid the perceived threat of catching a "superbug" while in hospital, although the DoH has pledged £60 million for a "deep clean" of all NHS England hospitals. The most deadly outbreak of Clostridium difficile was in two hospitals of the Maidstone and Tunbridge Wells NHS Trust, Kent, with 80-90 deaths attributed directly to the outbreak, a contributing factor in another 124 and a probable factor in another 55, according to the Healthcare Commissions Report.[8]

It is theorised that the increased use of strong antibiotics and disinfectants in modern society may account for the increase prevalence of resistant bacteria, although others argue that the introduction of private cleaning contractors into the NHS has been partly to blame, looking to save money at the cost of a loss of hygiene.

The lack of availability of some treatments due to their perceived poor cost-effectiveness sometimes leads to what some call a "postcode lottery". [9][10] NICE, the National Institute for Health and Clinical Excellence, are the first gatekeeper, and examine the cost effectiveness of new and relatively expensive drugs - most prescription is untouched by the guidelines they issue. Until they have issued guidance on the cost and effectiveness of new or expensive medicines, treatments and procedures, Primary Care Trusts are unlikely to offer to fund courses of treatment. The same of true of the Scottish Medicines Consortium, NICE's counterpart in Scotland.[11]

There has been considerable controversy about the public health funding of expensive drugs, notably Herceptin, due to its high cost and perceived limited overall survival. The campaign waged by cancer victims to get the government to pay for their treatment has gone to the highest levels in the courts and the Cabinet to get it licensed.[12][13] The House of Commons Health Select Committee criticised some drug companies for bringing in drugs that cost on and around the £30,000 limit that is considered the maximum worth of one QALY in the NHS.

Before the idea of PFI came to prominence, all new hospital building was by convention funded from the Treasury,as it was believed it was best able to raise money and able to control public sector expenditure. In June 1994, the Capital Investment Manual (CIM) was published, setting out the terms of PFI contracts. The CIM made it clear that future capital projects (building of new facilities) had to look at whether PFI was preferable to using public sector funding. By the end of 1995, 60 relatively small projects had been planned for, at a total cost of around £2 billion. Under PFI, buildings were built and serviced by the private sector, and then leased back to the NHS. The Labour government elected under Tony Blair in 1997 embraced PFI projects, recognising that public spending needed to be curtailed.[14] 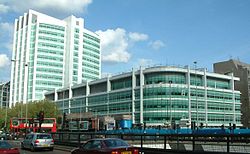 Under the Private Finance Initiative, an increasing number of hospitals have been built (or rebuilt) by private sector consortia, although the government also encouraged private sector treatment centres, so called "surgicentres".[15] There has been significant criticism of this, with a study by a consultancy company which works for the Department of Health showing that for every £200 million spent on privately financed hospitals the NHS loses 1000 doctors and nurses. The first PFI hospitals contain some 28% fewer beds than the ones they replaced.[16] As well as this, it has been noted that the return for construction companies on PFI contracts could be as high as 58%, and that in funding hospitals from the private rather than public sector cost the NHS almost half a billion pounds more every year.[17]

Several high-profile medical scandals have occurred within the NHS over the years such as the Alder Hey organs scandal and the Bristol heart scandal. At Alder Hey, there was the unauthorised removal, retention, and disposal of human tissue, including children’s organs, between 1988 and 1995. The official report into the incident, the Redfern Report, revealed that Dick van Velzen, the Chair of Fetal and Infant Pathology at Alder Hey had ordered the "unethical and illegal stripping of every organ from every child who had had a postmortem." In response, it has been argued that the scandal brought the issue of organ and tissue donation into the public domain, and highlighted the benefits to medical research that result.[18]

Over time, increased demand leads to continual political pressures to increase spending and widen the range of treatments available. The politicisation of health care which it is centrally funded and free at the point of use may be one reason why so few countries have adopted this model.

Supporters of the NHS would point out that the NHS has wide public support and the British population has as good a health outcome as many other similar countries, and often at much lower cost. Political pressure could work both ways, but the Blair government was elected in 1997 largely on a promise to invest more taxpayers money in health to bring spending closer to the European average - up to 9% of GDP. This is the position of all the political parties, none of which has an agenda to replace or make a wholesale reform to the system.

The Conservative Party says its policies are aimed at "Protecting and improving our health service by putting patients back at the heart of the NHS, and trusting the professionals to ensure that they are able to use their skills to make the fullest possible contribution to patient care".[19]

Those who can afford it sometimes opt for private healthcare, usually to get treated more quickly in private facilities (i.e. facilities not provided by, or using, NHS staff or services). When this occurs, these patients are opting to pay twice for their health care, once for the NHS through taxes, and again for the private care they are using. Critics argue that these people do use NHS services, such as their General Practitioner, screening, and vaccination services, and that their opting out from time-to-time is effectively queue jumping because they are utilising a resource ahead of someone in greater need and that their double payment is the penalty for queue jumping. It is argued that it is a civic responsibility for every citizen capable of paying legally applicable levels of tax, to do so, regardless of service use. Therefore, the public services can be subsidised for those who wish to use them - economically, the more people who pay taxes, the less cost to each individual concerned.