Perkinsus marinus is a prevalent pathogen of oysters, causing massive mortality in oyster populations. The disease it causes is known as "Dermo" (or, more recently, as "Perkinsosis"), [1] and is characterized by proteolytic degradation of oyster tissues. Due to its negative effect on the oyster industry, parasitologists interested in helping oyster farmers are trying to find novel strategies to combat the disease. P. marinus are found in marine water, and grow especially well in warm waters during the summer months. Its genome has been sequenced by TIGR,[2] but as of Nov, 2010 no publication describing this can be found in PubMed. The size of the genome is estimated to be ~86 megabases.

P. marinus are protozoa, and in particular belong to a group called the alveolates. The individual cells have two flagella, and have a partial polar ring used to attach to their hosts at the anterior. This is similar to structures found among the Apicomplexa, and Perkinsus was previously classified with them. However, genetic studies show that P. marinus is probably closer to the dinoflagellates, which also appear to have modified polar rings. If Perkinsus is a dinoflagellate, it is a basal one.[3]

The genome project of P. marinus, funded by NSF-USDA, was released in 2010[2] from The Institute for Genomic Research in collaboration with The Center of Marine Biotechnology of the University of Maryland Biotechnology Institute. Currently (2010), no associated journal article can be found on PubMed. It is unusual that genome projects complete without a publication being associated.

The closest relation to Perkinsus is the genus Parvilucifera. These form a sister group to the dinoflagellates.

The genus Colpodella forms a sister clade to the Apicomplexia.

P. marinus may start out in an immature trophozoite stage (also referred to as a meront, merozoite, or aplanospore stage depending on the authors' taxonomic preferences), at 2-3 µm in diameter. A mature trophozoite stage (also known as mature-meront, mature-merozoite, or mature-aplanospore stage) then forms with an appearance of a "signet-ring" 3-10 µm in diameter each containing a large eccentric vacuole with the nucleus dislocated to the periphery of the cell. The tomont stage (a.k.a. sporangia or schizonts), may form "rosettes", 4-15 µm in diameter, and containing 2, 4, 8, 16 or 32 developing immature trophozoites.[1] Under certain conditions there may also be an additional stage known as a biflagellate zoospore.[4][5] 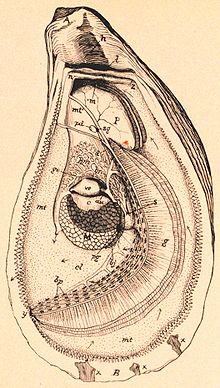 Dermo infections are usually passed from oyster to oyster, though waterborne P. marinus may drift and help to spread the disease. Another possible vector is dormant infections in other shellfish. Perkinsosis is not known to present any danger to human consumers of oyster tissue.[5]

P. marinus was first identified as a pathogen of the oysters in the Gulf of Mexico in 1950. [6] It was initially given the binomial designation Dermocystidium marinum from which the disease name Dermo originated.[5][6] By 1954 infections were also found in oysters throughout the southeastern United States.[7] The infection appeared in Long Island Sound by the 1990s.[7] In recent years the parasite has spread to a wider range, including the Northeastern United States up to Maine, but has not yet been reported in Canada.[1][7]

P. marinus infections have appeared primarily along the East coast of the United States from Maine to Florida, and along the Gulf Coast of the United States and Mexico to the Yucatán Peninsula.[1] Within that range certain places appear to suffer infection rates higher than other places. The pathogen was accidentally introduced into Pearl Harbor, Hawaii as early as 1973. For example the Chesapeake Bay appears to suffer high infection rates.[7]

P. marinus primarily infects hemocytes of Crassostrea virginica or Eastern oysters. Although experiments have been carried out with infections of Crassostrea gigas (Pacific oysters), Crassostrea ariakensis (Suminoe oysters), and Pinctada maxima (white or gold lipped pearl oysters) those other bivalves appear to be less susceptible to the disease than C. virginica. In experiments certain species of clams, abalone, and scallops appeared susceptible, but several mussels appeared immune.[1]

Infected oysters may have digestive glands that appear paler than uninfected oysters. They may also suffer from emaciation, gaping, retraction of the mantle away from the edge of the shell, and stunted growth. In advanced stages of infection there may be pus like areas in oyster soft tissues. The gross signs of infection are not necessarily pathognomonic of perkinsosis (in particular they are also symptoms of MSX infection).[1]

Dermo can be diagnosed by examination of a preparation from the oyster's anal-rectal tissues which have been cultured for 4 to 7 days in Ray's Fluid Thioglycollate Medium (RFTM). After the culture period the tissue sample is then stained with Lugol's iodine. In a light microscope P. marinus cells will appear as blue to black stained spheres.[1][4]

There may be commercial or government agencies that are able to provide diagnostic services.[5]

There are other members in this genus.

The genus Perkinsoide may be related.

Members of this genus have nine chromosomes.