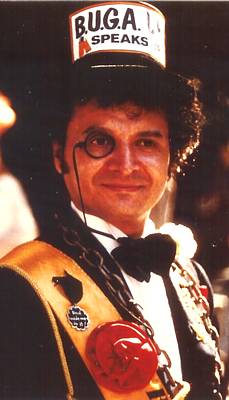 Rolo Mestman Tapier ( – ) otherwise known as Lord Bloody Wog Rolo was a colourful eccentric Sydney identity and one of the founding members of BUGAUP (). [ cite web | url = http://www.smh.com.au/articles/2002/10/11/1034222596319.html | title = No ifs, no butts - these boys were tough | publisher = Sydney Morning Herald | date = 2002-10-11 | accessdate = 2007-12-08] A highly intelligent and articulate man, Rolo spoke five languages fluently - English, Spanish, Italian, Portuguese and French. He was also a talented whistler although his amazing virtuosity was demonstrated only for family and friends.

Argentine born Rolo first came to the attention of the Sydney community in 1979 when he renounced his pledge of allegiance to the Queen immediately following his immigration citizenship ceremony on the grounds that he was a an and the Queen was not a democratically elected representative of the people. [ cite news | title = Monarchy man told to get out | publisher = The Daily Mirror | date = 1980-03-26] The renunciation caused a furore. Many sections of the community, including the RSL, called for his deportation. [ cite news | title = Use of the monarchy | publisher = Newcastle Morning Herald | date = 1980-04-26]

Rolo was arrested during the 1981 Australia Day parade and charged with "behaviour likely to cause serious alarm and affront". He was wearing a sandwich board bearing anti-monarchist s such as "Abolish the Monarchy" and "s are kow-towing colonialists suffering from an " [ cite news | title = Why were these men arrested? | publisher = Weekend Australian | date = 1981-01-31] and an offer to argue the topic with anyone who cared to pay 20c for the privilege. The magistrate dismissed the charge against him at the request of Rolo's Wayne Flynn who had been hired by the . [ cite news | title = Lord Rolo protest charge dismissed | publisher = The Glebe and Western Weekly | date = 1981-06-03]

Later in 1981, Rolo publicly apologised and said he had finally seen the error of his ways. He claimed he now saw that the Monarchy was the best system for Australia and to make amends he changed his name by deed poll to Lord Bloody Wog Rolo - to provide a service between Royal visits for those who wanted to and pay homage to royalty. He stated he was so adamant that the monarchical system was the best that he proposed all Australian-born children should also swear allegiance to the crown and be deported if they refused. [ cite news | title = Royalty best for Australia - Lord Rolo | publisher = The Sunday Mail | date = 1981-09-13]

As a mark of his true respect for all things royal, Rolo founded the British Ultra Loyalist League Serving Historical Interests Today and loudly and cheerfully proclaimed to anybody who asked the question that the answer was B.U.L.L.S.H.I.T.

Rolo takes on the NSW Police

Rolo's slogan-daubed car was a regular sight in the streets of Sydney, with protests of everything from smoking to royalty to religion which resulted in many traffic infringement bookings and saw him arrested many times by police who did not find the slogans as amusing as most Sydney-siders appeared to find them. Usually the charges were dismissed once they got to court. One charge was for licence - police refused to accept that the Motor Transport Department had issued a driver's licence under the name Lord Bloody Wog Rolo.

Until this time, there had been no anti-police slogans on the vehicle. However, never one to back down, Rolo then added the ambiguous "Pigs are definitely not Kosher" and the less ambiguous "Support honest police, they both need you". [ cite news | title = Rolo ready to ride again | publisher = Sun Herald | date = 1982-06-13] He stated the Police harassment made him more determined to continue his antics. "I left Argentina because it is run by a police-military fascist regime. I thought Australia was the land of , but since I began speaking out about things I think are wrong, I've found Australia is becoming a ". [ cite news | title = His Lordship's at it again | publisher = The Glebe and Western Weekly | date = 1982-06-16]

In September 1982, Rolo advertised his now notorious vehicle for sale at $1,000 with a $200 discount if the purchaser agreed not to remove the slogans for one full year and drive it on the roads. The article does not state whether the purchaser accepted the $200 discount! [ cite news | title = Bunyip on his beat | publisher = The Glebe and Western Weekly | date = 1982-09-29]

Since Rolo had officially changed his name by deed poll, although reluctant to do so, the police had no choice but to charge Rolo using his full legal name. Many waiting defendants sit in the court room waiting for their charges to be announced. Not Rolo.... Rolo would pick the farthest corner of the court complex so that when his matter was reached, the magistrate would direct the court constable to "call the defendant". In a loud voice the court officer would walk among the crowd outside the court calling "Lord Bloody Wog Rolo, Lord Bloody Wog Rolo, Lord Bloody Wog Rolo." Rolo would then acknowledge his presence, and walk into the court room (decked out in full royal regalia) and the court officer would announce his presence thus "Lord Bloody Wog Rolo is before the court, Your Worship", much to Rolo's satisfaction and the amusement of the public gallery. [ cite news | title = Lord of the Billboard | publisher = The Sydney Morning Herald | date = 2008-01-18]

In 1981 Rolo formed the Keep Australia Black Movement (KABM) as a counter to the publicity given to the Keep Australia White Movement (KAWM). In a press release dated 6 November 1981 Rolo stated that the KABM should be given at least equal coverage since the KABM "had 15 more members than the KAWM, only half which were under full time mental treatment". He also demanded equal rights for all discriminators.

One of Rolo's stated tasks as Imperial Wizard and National Director of the KABM was to educate minorities to accept names like "abo", "", "", "" and "" as simple descriptive statements of fact and something to be proud of. He also proposed that white people could become honorary members of the KABM by agreeing to acquire a sun-tan and "remain in a constant state of contrition which should be manifested at least once daily".

Rolo first became a BUGAUP activist around 1980/81 after a run-in with Coles supermarkets which were trial marketing a shopping bag adorned with cigarette advertising at their Chatswood store. When Rolo noticed his purchases had been put into bags promoting Peter Jackson cigarettes, he cancelled the sale and left the store - loudly voicing his disapproval and disgust.

The next day, he and another like-minded friend mounted an attack on the store. Both men piled their trolleys high, waited until the checkout operator had keyed in the items (no scanning in those days), then refused to take them away in the Peter Jackson bags. Just as the Manager was called to remonstrate with the first person, the second hit another checkout with the same tactic. The inconvenience made the trial a total failure and the whole of Australia was spared cigarette ads on checkout bags.

In 1982, thousands of people saw Rolo and two other men leisurely defacing a giant cigarette billboard high on the roof of a five storey building at North Sydney. The three men spent an hour working on the 5m x 15m Marlboro sign at the main intersection at Crows Nest. They gained access to the roof simply by walking in the front door on the afternoon of Christmas Eve and catching the lift. Using three litres of paint and waiting for the first coat to dry, they were watched by hundreds of office workers having Christmas parties and would have been seen by thousands of motorists and pedestrians. Nobody took any action.

In 1984, Rolo and fellow BUGAUP member Ric Bolzan appeared before the District Court, charged with allegedly damaging a Formula One racing car on display in the NSW Art Gallery in 1982. They chained themselves to the vehicle and sprinkled it with cigarette butts. The car, owned by Alfa Romeo, was part of a display at the gallery sponsored by Philip Morris, and was emblazoned with advertisements for Marlboro cigarettes. The jury took one and a half hours to reach its verdict and Rolo was convicted on a charge of maliciously injuring the racing car. Rolo was fined $75 but as was the practice of BUGAUP members, elected not to pay the fine imposed by Judge Jane Mathews, choosing instead to spend three days "as a guest of Her Majesty" at Long Bay Gaol. [ cite news | title = Convicted BUGA UP man says he will not pay $75 fine | publisher = Sydney Morning Herald | date = 1984-10-31]

Born Alberto Rolando Yapur on the 1st of July 1945 in San Miguel de Tucumán (Argentina), Rolo's mother was Jewish of Ukrainian descent and his father was a Roman Catholic. As a child Rolo was fascinated by electronics and when he was about 12, set up a small business selling radios which he made himself. Rolo's love and fascination of electronics lasted his entire life.

After his National Service obligation was served as a para-trooper in the , Rolo studied and qualified as an electronics engineer. [ cite web | url = http://www.smh.com.au/news/obituaries/activist-used-humour-as-his-best-defence/2008/01/16/1200419882255.html?page=fullpage#contentSwap1 | title = Activist used humour as his best defence | publisher = Sydney Morning Herald | date = 2008-01-17 | accessdate = 2008-01-17] In 1970 Rolo emigrated to Australia, setting up home in Sydney, Australia. Due to a spelling error on his immigration documents, Rolo became known as Tapur (instead of Yapur) in Australia. Rolo decided to change Tapur to Tapir since a is "a thick-skinned South American with a big nose" - Rolo always had a sense of humour.

In March 1985 Rolo married fellow BUGAUP activist Rosalyn Anderson who became Lady Bloody Wog Rolo. [ cite web | url = http://tobacco.health.usyd.edu.au/tds/details.jsp?document_id=OTH198X0022&number=30 | title = BUGA UP: When you're out and about do the right thing to a billboard! | accessdate = 2007-12-08] They have two sons - Alex born 1986 and Robin born 1988. As happens with many activists, Rolo's sons were rather more conservative than Rolo and used the surname Tapier - an anglicized version of Tapir. In 2000 Rolo changed his name to Rolo Mestman Tapier to match the name his sons were using.

In 1986 Rolo designed and manufactured an automobile alarm that was rated highest out of ten auto alarms evaluated by the in a trial conducted in 1987. The results were published in the March 1988 edition of . Even his car alarm caused controversy as United Artists Corporation filed an application to oppose the registration of Rolo's trademark "Black Panther". UAC did not state the grounds for their opposition, only that they were the owners of the Pink Panther character. The Black Panther logo was drawn by Sydney artist Kevin McKay and featured a cartoon depicting a black panther leaning against an automobile. United Artists did not provide evidence of support and their opposition application eventually lapsed and the trademark was duly registered.