The Japanese Special Naval Landing Forces (SNLF), (海軍特別陸戦隊 Kaigun Tokubetsu Rikusentai) were the marine troops of the Imperial Japanese Navy (IJN) and were a part of the IJN Land Forces. They saw extensive service in the Sino-Japanese War (1937-1945) and the Pacific theatre of World War II. 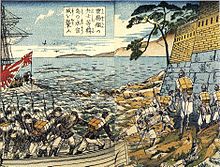 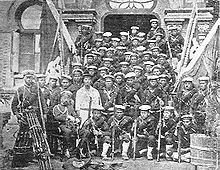 Prior to the late 1920s the IJN did not have a separate marine force, instead it used naval landing forces or rikusentai formed from individual ships's crews, who received infantry training as part of their basic training, for special and/or temporary missions.

In the late 1920s, the navy began to form Special Naval Landing Forces as standing regiments (albeit of battalion size). These forces were raised at — and took their names from — the four main naval districts/bases in Japan: Kure, Maizuru, Sasebo, and Yokosuka. These bases all raised more than one SNLF.

These SNLF units saw action in China from 1932 in the January 28 Incident and at the Battle of Shanghai and in naval operations along the China coast and up the Yangtze River and its tributaries during the Second Sino-Japanese War.

Other SNLF were later raised from IJN personnel in China, at Hankow, and Shanghai, for service in Canton and on the Yangtze River. On 7 December 1941 there were 16 SNLF units, this increased to 21 units during the war. The strengths of each SNLF ranged from the prewar peak of 1,200 to a later 650 personnel. There was also a special detachment in the Kwantung area, garrisoning the ports of Dairen and Ryojun.

In 1941, the 1st, 2nd and 3rd Yokosuka SNLF were converted to parachute units. They conducted more combat drops than Japanese Army parachute units during World War II. The SNLF paratroopers were used during the attack on Celebes, to much lauded success by the Imperial government.

The original SNLF personnel were well-trained, high quality troops with good morale and they performed well against unprepared and unorganized opposition across Southeast Asia. However, when faced with determined resistance, such as at the invasion of Timor and the Battle of Milne Bay in 1942, they often experienced heavy casualties due to their unwillingness to surrender. When completely out of ammunition, they would often resort to hand-to-hand fighting with their swords. They were also responsible for the Manila massacre during the Allied invasion of the Philippines in February 1945, were 10,000 SNLF troops under the command of Vice Admiral Sanji Iwabuchi disobeyed orders and stayed behind to fight the Americans.

6th Kure SNLF in formation at their home barracks in Japan before deploying for the Midway operation, June 1942.

ubiqued in main bases of Kure, Maizuru, Sasebo, Yokosuka along special training centers of Ryojun and Dairen in Kantogun.

recruits were trained at the army/navy paratrooper training base on Kanto Plain.

created in the Tateyama IJN Ordnance School that was across from Tokyo on the Boso Peninsula.

established in the IJN aquatic armour unit at Q-Base on Nasakejima in 1943 and your first trained units were sent to Rabaul (New Guinea) and the Marshall Islands in October of same year.

On board ship the sailors of the SNLF wore their standard IJN blue or white uniforms. On land the SNLF wore a uniform similar to that of the Imperial Japanese Army. The land uniform consisted of a green single breasted tunic with a stand and fall collar with three buttons which ran down the front. The SNLF usually wore this uniform with the collar open and officers wore it with a shirt and tie. The tie was originally dark blue but was later changed to green. Green long trousers or pantaloons were worn as standard along with the wool puttees or leather gaitors. All except mounted troops (who wore breeches and high leather boots) wore this uniform with horsehide, pigskin or leather ankle-boots.

SNLF Paratroopers wore two types of green uniform made from rip stop parachute silk with built in bandoleers and cargo pockets, being better designed than other paratrooper models of the time.

Originally green rank insignia was used for SNLF officers. These were worn on either shoulder boards or collar tabs. Enlisted men wore red on green round ratings on the upper sleeves. Later the standard black Japanese Naval collar rank was adopted and worn by officers. The enlisted men went to red on blue round ratings.

The ankle boots had either a hobnailed hard leather sole with metal heel J-cleat or a rubber sole with rubber cleats. When off duty, Sailors could wear tabis. A collarless wool or cotton white, gray or light green under shirt was worn under the tunic. This had one or two patch breast pockets with buttoned flaps, most had only a single pocket on the left breast. A khaki cotton shirt with stand and fall collar and two breast pockets could be worn in warm climates, with or without the tunic. The flat-topped peaked cap was replaced by a cloth field cap with a short leather or (more usually) cloth peak.

SNLF officers were not usually issued uniforms so they had to procure their own, thus there was a wide variety in the details, color and texture of their uniforms, with uniform colors ranging from pale to dark green. Collars were stiffer and materials were of a higher quality. All ranks later wore a single breasted version of the IJA M98. Officers could wear straight trousers with their M98 uniforms as a walking out uniform and later they could also wear the tunic with the collar open over a white or gray green shirt.

The Adrian helmet was replaced by the Navy Type 2 and later the Type 3. Both were variants of the IJA Type 92 (1932). It was officially called tetsubo (steel cap) but was called tetsukabuto (Steel Helmet) by troops. It was made in the shape of a dome with a short protruding rim all the way around it the IJN's Type 2 had a less flared rim. This helmet was made of a thin inferior chrome-molybdenum steel with many proving to be very fragile, being easily pierced by shrapnel and/or gunfire. The IJN Type 3 was even thinner and made cheaper than the Type 2. An anchor for the IJN was fixed to the front with two bendable prongs attached to the back of the badge. They passed through a slit in the front of the shell and were then bent over to secure the badge to the helmet. The helmet and anchor were then painted one of many shades of green. They were sometimes whitewashed in the winter. A tan cover known as a first pattern was a two layer, fiber reinforced linen cover with a wool/felt two piece anchor sewn on the front. The second pattern cover was a shade of green. It had a one piece bevo woven anchor insignia sewn onto its front. Nets were then used to add a camo effect. The helmet was secured to the head by an elaborate set of straps descended from those of the Kabuto samurai helmet, although IJN helmet tapes were tied differently from the way the IJA tied them. It was also able to be worn over a field cap. Camouflage nets were widely worn over the helmet especially in the Southern theatre and Pacific island campaign. 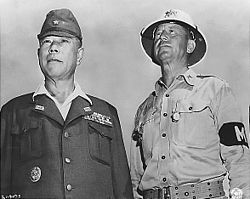 The IJA issued single-breasted over coats, capes and raincoats with hoods in olive drab.

SNLF troops train with a heavy machine gun in 1942.