Christopher Raul Candito[2] (March 21, 1972–April 28, 2005)[1] was an American professional wrestler better known by his ring name Chris Candido. Throughout most of his career, he was accompanied by his high school sweetheart Tammy Lynn Sytch.

Candito was the grandson of "Popeye" Chuck Richards, a wrestler for the World Wide Wrestling Federation, a precursor to the WWF. He started training at age 14 with Larry Sharpe and wrestled for Sharpe's World Wrestling Association. He began using the alternate spelling of "Candido" for his ring name.

While in high school, he met and fell in love with Tammy Lynn Sytch, and the two began a lifelong relationship. Sytch would later become his valet.

In the early 1990s, Candido was a part of Eastern Championship Wrestling (later Extreme Championship Wrestling). While in ECW, he was part of a stable called "The Suicide Blonds" with Johnny Hotbody and Chris Michaels. The trio had two stints as the Tag Team Champions; the first from April 2, 1993 to May 15 after winning them from Tony Stetson and Larry Winters.[3] They lost the titles to the Super Destroyers, only to regain them the same day.[3] They later vacated the titles when Candido left the promotion.

On November 19, 1994, Candido won a 10-man tournament, defeating Al Snow, Dirty White Boy, and Tracy Smothers to win the NWA World Heavyweight Championship, which had been won and immediately vacated by Shane Douglas and ECW that August.

Candido's reign came at a time when national exposure for the National Wrestling Alliance was at an all-time low, as there was no national television outlet for the organization. His title defense matches were mostly held in small independent federations and SMW. Candido dropped the belt to Dan Severn on February 24, 1995, whose subsequent reign lasted over four years.

Candido and Sytch moved on to the WWF where Sytch was dubbed "Sunny" and Candido "Skip", the fitness fanatics The Bodydonnas.[4] On March 31, 1996, Candido won the WWF Tag Team Championship with Zip from The Godwinns during the finals of a tournament for the vacated titles.[4][5] They lost the titles on May 19, 1996, however, at a house show.[6] According to Tammy Sytch in interviews post Candido's death, Candito and Sytch had a brief separation behind the scenes while working for the WWF. 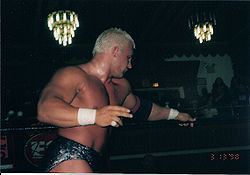 After leaving the WWF, Candido joined ECW again, becoming part of the revived Triple Threat stable alongside Shane Douglas.[4] While in the Triple Threat with the nickname "No Gimmicks Needed", he developed a rivalry with fellow member Lance Storm, who was soon replaced by Bam Bam Bigelow. However, Candido teamed with Storm to win the ECW Tag Team Championship.[4] They won the tag titles on December 5, 1997 from Doug Furnas and Phil Lafon.[3] Despite being a reluctant team who hated each other, Candido and Storm had a lengthy championship run. The duo held the titles for approximately six months until they lost them on June 26, 1998 to Sabu and Rob Van Dam.[3]

He also had a brief run in World Championship Wrestling (WCW), which started when he was cleared to compete on March 16, 2000.[7] During his stint there, he won the WCW Cruiserweight Championship.[4] He won the title on April 16, 2000 in a six-way match at Spring Stampede against The Artist, Juventud Guerrera, Shannon Moore, Lash LeRoux, and Crowbar.[8] He lost the title on May 15 of that same year.[8] Later, the Triple Threat reformed in WCW, with Candido, Douglas, and Bam Bam Bigelow. However, the reformation was short lived, after Tammy was released from WCW due to backstage problems with Kimberly Page.

Candido had two runs with Xtreme Pro Wrestling. The first was in 2000, and he won the XPW World Heavyweight Championship before leaving for WCW. The second run was from late 2002 until the company's final show in 2003.

Candido debuted in Total Nonstop Action Wrestling (TNA) in January 2005, and wrestled with them throughout 2005, until he died from a post-surgery blood clot. Because his last performance was taped to air later in the week, he was featured on an episode of TNA Impact! after his death.

At Lockdown on April 24, 2005 Candido fractured both his tibia and fibula and dislocated his ankle during a steel cage match with Lance Hoyt against Apolo and Sonny Siaki.[4] He underwent surgery the next day to have steel plates and screws inserted into his leg. Later in the week, Sytch picked Candido up from the airport, and was told he was given only pain medication but no antibiotics, which are normally given after surgery. He was at the following Impact! tapings managing The Naturals to defeat America's Most Wanted to win the NWA World Tag Team Championship.[4] On April 28, 2005, Candido felt ill and his condition worsened during the day. He collapsed in the evening and was rushed to the hospital.[4] He was diagnosed with pneumonia. Doctors drained his lungs, but Candido died soon afterwards. He was 33 years old. According to his brother Johnny, Candido died due to a blood clot, a complication from surgery.[4] TNA acknowledged his death on their website[4] and in late 2005 held the Chris Candido Memorial Tag Team Tournament, a tag team tournament in honor of Candido's memory.

Candido performing a Delayed vertical suplex on Jerry Lynn in 1998. 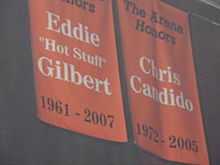