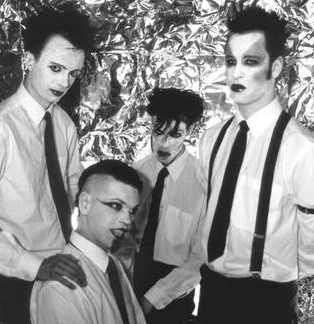 Snuff Pop Inc. (commonly abbreviated as SPI), is a four-piece Danish pioneer band from formed in the spring of by [http://www.imdb.com/name/nm0432964/ Chris Juris] , , and .

The first step towards Snuff Pop Inc as a concept was made by the singer () already in when he made the initial material, this a short while after the breakup with his former creation, the rock band . In 1992 Ant invents the name Snuff Pop Inc. which to begin with is the title of a project in which the music enters into various contexts, such as s and .

Snuff Pop Inc. as a band was fully formed in . Lead singer Ant (aka [http://www.imdb.com/name/nm0432964/ Chris Juris] ) became acquainted with the bass player (aka Jesper Staustrup) in 1996 and the guitar player Kristoffer was implicated in the project this year, too. In 1997 (aka Benjamin Funk) became the drummer of the band. In 2000 Kristoffer decided to leave the band and was replaced by Steff (Steffen Andersen). In the end of 2002 Steff and Jaev leave the band to engage in their own projects, and are replaced in the spring of 2003 by (aka Anders Rathmann) on bass and Sonic (aka Thomas Buchwald) on guitar. This lineup has remained in force ever since.

The music and lyrics are composed by Ant in keeping with the concept as initially devised. The concept forms the basis of the overall expression of the band, i.e., instrumentation, composition, lyrics and staging. In addition to the analog instruments (bass, guitar, drums and vocal) the final and equally significant part consists in an expanse of - and sounds arranged by Ant, embracing all from sounds to musical instruments, as well as . These and analog parts play an equally dominating role in the arrangements. The overall result is a wide and well-developed musical panorama, developing a style that the band, inspired by a review, calls . In concert the - and -arrangements are executed from a , controlled by Max Funk playing to a track in headsets from the hard disk.

Ant's compositional background originates from as well as , consequently the band's compositional reference, albeit it in a rather hidden way, lies in the classical field. However, it is difficult to place Snuff Pop Inc. within one certain category of style. Still, it isn't difficult to recognize their characteristic genre, once introduced. Fundamental to the band is the line of approach by which the musical elements at times illustrate and exemplify the contents of the lyrics, characteristic of and film music. In terms of harmony and form the compositions don't allow of any marked definition of genre. But the band is frequently placed in alternative genres such as and so-called - an educated but not adequate reference. The independent genre and characteristic stage show may provide comparisons with bands like , T. Rex, and . These comparisons can be slightly useful.

The name and concept

The internally contradictory name Snuff Pop Inc. derives from an ambiguous analogy between and pop . Hence, the name is a contraction of the names of the two institutions. The analogy consists in the view of the pop star as a product of a business mainstream , exploiting and suppressing the free creative will that ends up being subjugated by a greedy media . The majority of the mortal stars we follow in the Media never last long as they are pressed by the industry to the limit of their own abilities in order to maintain success, and therefore get burned out after a comparatively short while. So the term 'snuff' in relation to the band is only employed in a figurative sense to express a critical dissociation from the exploitation of the creative artist, and has nothing to do with the urban legend referred to as s.

Industry versus creativity is the and the guideline of the concept, rubbing off on the compositions to a certain extent. Snuff Pop Inc. is voyeuristic / exhibitionistic in an in which the highest desirable state is in the part of the () paid and adored by the voyeuristic audience. Taken to its logical conclusion all managers are pimps. The concept is a reaction towards our introspective self-contemplation through the stars that represent us as the s we are for any given product that the business world wants to sell to us!

Snuff Pop Inc. debuted by warming up for the well-known American band in the spring of hereby obtaining exposure to a big audience. In relation to Christian Death's musical affiliation with the , Snuff Pop Inc. was to some extent drawn into this category, not least because of their outwardly theatrical appearance, which undoubtedly resounded in the Danish Goth subculture at the time, however little the musical style belongs in the Goth genre. The most recent tour abroad took place in Germany 2003, where the band was touring with [http://www.kiew.org/ Kiew] among other bands in several cities.