The Minoji (美濃路, Mino Road?) was a 60 km (37 mi) highway in Japan during the Edo period. It was a secondary route, ranked below the Edo Five Routes in importance, and connected Miya-juku on the Tōkaidō with Tarui-juku on the Nakasendō.[1]

The road received much use before and after the Battle of Sekigahara in 1600. Fukushima Masanori, the leader of the eastern armies, traveled the Minoji from Okoshi (modern-day Ichinomiya) to Mino Province for the battle. Tokugawa Ieyasu, the victor of the battle, traveled the route afterwards to a hero's welcome. It was also referred to as the Kichirei Kaidō (吉例街道). 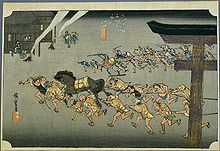 Hiroshige's print of Miya-juku, part of the The Sixty-nine Stations of the Kiso Kaidō series

Including the starting and ending points, there were only nine post stations on the Minoji.[2] The route was named after Mino Province, which makes up the southern portion of the modern-day Gifu Prefecture. As such, the route spans both Aichi and Gifu prefectures. The stations are listed below, with their current municipality in parentheses.