The Mold Cape is a solid sheet-gold object dating from about 1900-1600 BC in the European Bronze Age. It was found at Mold in Flintshire, Wales, in 1833.

The cape is thought to have formed part of a ceremonial dress, perhaps with religious connections. It is currently housed at the British Museum in London.

The gold cape was found in 1833 by workmen (accounts vary: either during the filling of a gravel pit[1] or while they were quarrying for stone[2]).

The cape was within a Bronze Age burial mound in a field named Bryn yr Ellyllon, the Fairies' or Goblins' Hill. The gold cape had been placed on the body of a person who was interred in a rough cist (stone-lined grave) within a burial mound. The preserved remains of the skeleton were fragmentary, and the cape was badly crushed. An estimated 200-300 amber beads, in rows, were on the cape originally, but only a single bead survives at the British Museum. Also associated with the cape were remains of coarse cloth and 16 fragments of sheet bronze which are likely to have been the backing for the gold: in places the gold was riveted onto the bronze sheeting with bronze rivets. There also were two gold 'straps' among the artefacts found. An urn with large quantities of burnt bone and ash was 0.6–0.9 m from the grave.

The cape's breadth is 458 mm, just over 18 inches. It was designed to fit someone of a very slight build and although the gender of the person buried in this grave remains unclear, the associated finds are likely, by comparison with similar contemporary graves discovered, to be those accompanying the burial of a woman.[3] 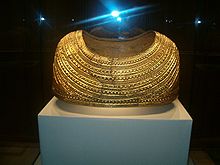 The cape is considered to be one of the most spectacular examples of prehistoric sheet-gold working yet discovered. It is of particular interest as both its form and its design are unparalleled. The cape is oval in shape and would cover the shoulders, upper arms, and upper chest of the person wearing it, being higher at the back and lower in the front.

The craftsmanship with which the cape was constructed is exceptional. The object was beaten out of a single ingot of gold, a task which would have taken considerable time and skill, and was then intensely decorated with repoussé concentric rings of ribs and bosses. The decoration almost totally fills the object's outer surface, so that very little "plain" gold remains. It has been suggested that this decorative motif may mimic multiple strings of beads and/or the folds of cloth.[2]

The value of the metal and the quality of the craftmanship suggests that the cape was produced by a wealthy culture. Scholars speculate that the makers and owners of the cape were associated with the mine at Great Orme, the largest copper mine in north-west Europe at that time.[4]

As the cape extends so far down the upper body, it would have severely restricted arm movement by pinning them to the wearer's side, so that only the lower arms were usable. For this reason, it has been concluded that the cape would not have been suitable for everyday wear. It seems most probable that the cape was used for ceremonial purposes, and may have signified the wearer as a person of spiritual or temporal power: the Bronze Age equivalent of a chasuble, perhaps. 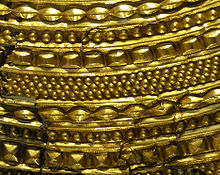 Around the neck and base are a line of perforations. There are three zones of decoration on the cape: a band running around the base, a curving panel which dips at the neck and rises over the shoulders, and two matching panels to fill in the upper arm area. Above the perforations at the base are two high ridges and a deep groove. Above the groove is a line of conical bosses which runs around the whole cape, but bifurcates at the front to rise up over the triangular panels at the upper arm. The bosses at the front are enlarged.

The two triangular areas on the upper arm are bounded at the front by a ridge, row of lentoid bosses and a ridge. At the front and back it is then bounded by three rows of small domed bosses. Inside this is a ridge, a row of conical bosses, and two ridges with a groove. The central area is filled with small domed bosses. At the base of each ridge and the large bosses are fine punched indentations (pointillé). In places the perforations at the base are double. In areas where parts of the cape are missing there are perforations (possibly from a previous repair).

Perforations along the upper and lower edges may indicate that it was once attached to a lining, perhaps of leather, which has decayed. The bronze strips may have served to strengthen the adornment further.[5]

The Wessex region of England during the Bronze Age was noted for the wealth of its grave goods, particularly the exquisite goldwork in up to 15% of its graves. Fifteen findspots of goldwork are known for Wessex, compared to five in four other southern English counties (Cornwall, Devon, Essex, and Norfolk) with an apparent complete absence in the rest of the country. It is thought that much of this Wessex goldwork was the product of a single master craftsman, and that all may have been a product of his workshop.[6] The Mold cape is the only other piece of Bronze Age goldwork which challenges the Wessex material in its richness; however, the decorative motifs employed in the cape are dissimilar to those found in the Wessex material.[7]

The Mold cape shows both indigenous and Continental influences. Similar treatment of decorative motifs may be found in other pieces of Bronze Age metalwork, such as a bowl found at Rongères in eastern France (which itself draws from Central European sources), and also with the lenticular bosses found on the Migdale (Sutherland, Scotland) bronze "spacer-plate" (a device to hold apart the separate strands of a necklace) and the bronze armlets found at Melfort in Argyll, Scotland. This distinctive boss motif, surrounded by fine dots outlining the lenticular shape, has a long duration in Scotland and obviously survived in the indigenous repertoire to re-appear on this unusual cape.[8]

With its fine repoussé work the Mold cape represents the last major piece of second millennium BC sheetwork so far discovered. Thereafter, the dominant preference for sheetwork in the British Isles is eclipsed and the evidence is more of massive goldwork in the form of solid bracelets, twisted bar-flanged torcs, and solid rings.[9]

Since its backing had decayed, the fragile cape broke up during recovery. The pieces were dispersed among various people. Although the British Museum acquired the greater proportion in 1836, small fragments have come to light intermittently over the years and have been reunited with the larger portion.

Later, detailed study and restoration revealed the full form of the cape, which at one time had been misinterpreted as a peytrel (chest ornament) for a horse. It also became apparent that a second, smaller object in matching embossed style, was present in the grave. The cape is presently mounted on cloth.

The cape was number 6 in the list of British archaeological finds selected by experts at the British Museum for the 2003 BBC Television documentary Our Top Ten Treasures presented by Adam Hart-Davis. It also featured in the BBC Radio 4 series A History of the World in 100 Objects, as object number 19 in February 2010.

This article is about an item held in the British Museum. Object reference: 1836,0902.1.
Categories: