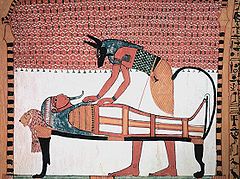 Anubis was the ancient Egyptian god associated with mummification and burial rituals. Here, he is shown attending to a mummy.

The ancient Egyptians had an elaborate set of burial customs that they believed were necessary to ensure their immortality after death. These rituals and protocols included mummification, casting of magic spells, and burial with specific grave goods thought to be needed in the afterlife.[1][2] The burial process used by the ancient Egyptians evolved throughout time as old customs were discarded and new ones adopted, but several important elements of the process persisted. Although specific details changed over time, the preparation of the body, the magic rituals involved, and the grave goods provided were all essential parts of a proper Egyptian funeral.

The Book of the Dead was a collection of spells designed to guide the deceased in the afterlife.

After the mummy was prepared, it would need to be re-animated, symbolically, by a priest. The Opening of the Mouth Ceremony was conducted by a priest who would utter a spell and touch the mummy or sarcophagus with a ceremonial adze - a copper or stone blade. This ceremony ensured that the mummy could breathe and speak in the afterlife. In a similar fashion, the priest could utter spells to reanimate the mummy's arms, legs, and other body parts.

Many mummies were provided with some form of funerary literature to take with them to the afterlife. Most funerary literature consists of lists of spells and instructions for navigating the afterlife. During the Old Kingdom, only the pharaoh had access to this material, which scholars refer to as the Pyramid Texts. The Pyramid Texts are a collection of spells to assure the royal resurrection and protect the pharaoh from various malignant influences. The Pharaoh Unas was the first to use this collection of spells, as he and a few subsequent pharaohs had them carved on the walls of their pyramids.[3] These texts were individually chosen from a larger bank of spells.

In the First Intermediate Period and in the Middle Kingdom, some of the Pyramid Text spells also are found in burial chambers of high officials and on many coffins, where they begin to evolve into what scholars call the Coffin Texts. In this period, the nobles and many non-royal Egyptians began to have access to funerary literature. Though many spells from the earlier texts were carried over, the new coffin texts also had additional spells, along with slight changes made to make this new funerary text more relatable to the nobility.[4]

In The New Kingdom, the Coffin texts became the Book of the dead, or the Funeral Papyri, and would last through the Late Kingdom. The text in these books was divided according to chapters/ spells, which were almost two-hundred in number. Each one of these texts was individualized for the deceased, though to varying degrees. If the person was rich enough, then they could commission their own personal version of the text that would include only the spells that they wanted. However, if one was not so wealthy, then one had to make do with the pre-made versions that had spaces left for the name of the deceased.

If the scribe ran out of room while doing the transcription, he would just stop the spell wherever he was and would not continue.[5] It is not until the twenty-sixth dynasty that there began to be any regulation of the order or even the number of spells that were to be included in the Book of the Dead.

At this time, the regulation is set at 192 spells to be placed in the book, with certain ones holding the same place at all times.[6] This makes it seem as if the order of the texts was not what was important, so the person could place them in an order that he was comfortable with, but rather that it was what was written that mattered. 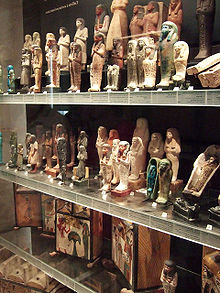 A selection of shabti statues

From the earliest periods of Egyptian history, all Egyptians were buried with at least some burial goods that they thought were necessary after death. At a minimum, these usually consisted of everyday objects such as bowls, combs, and other trinkets, along with food. Wealthier Egyptians could afford to be buried with jewelry, furniture, and other valuables, which made them targets of tomb robbers. In the early Dynastic Period, tombs were filled with daily life objects, such as furniture, jewelry and other valuables. They also contained many pottery and stone vessels.[7]

As burial customs developed in the Old Kingdom, wealthy citizens were buried in wooden or stone coffins. However, the number of burial goods declined. They were often just a set of copper model copper tools and some vessels.[8] Starting in the First Intermediate period, wooden models became very popular burial goods. These wooden models often depict everyday activities that the deceased expected to continue doing in the afterlife. Also, a type of rectangular coffin became the standard, being brightly painted and often including an offering formula. Objects of daily use were not often included in the tombs during this period. At the end of the Middle Kingdom, new object types were introduced into burials, such as the first shabtis and the first heart scarabs. Now objects of daily use appear in tombs again, often magical items already employed for protecting the living.

In the New Kingdom, some of the old burial customs changed. For example, an anthropoid coffin shape became standardized, and the deceased were provided with a small shabti statue, which the Egyptians believed would perform work for them in the afterlife. Elite burials were often filled with objects of daily use. Under Ramses II. and later all daily life objects disappear from tombs. They most often only contained a selection of items especially made for the burial. Also, in later burials, the numbers of shabti statues increased; in some burials, numbering more than four hundred statues. In addition to these shabti statues, the deceased could be buried with many different types of magical figurines to protect them from harm. Although the types of burial goods changed throughout ancient Egyptian history, their functions to protect the deceased and provide sustenance the afterlife remained a common purpose.

Funerary boats are a part of some ancient Egyptian burials.[1] Boats played a major role in religion because they were conceived as the main means by which the gods traveled across the sky and through the netherworld. One type of boat used at funerals was for making pilgrimages to holy sites such as Abydos. A large funerary boat, for example, was found near the pyramid of the Old Kingdom Pharaoh Kheops.

Though no writing survives from predynastic Egypt, scholars believe the importance of the physical body and its preservation originated there. This would explain why people of that time did not follow the common practice of cremation, but rather buried the dead. Some also believe they may have feared the bodies would rise again if mistreated after death.[9]

Early burials had the body of the deceased buried in a simple, shallow oval pit, with a few burial goods placed around them. Sometimes multiple people and animals were placed in the same grave. Over time, graves became more complex, with the body placed in a wicker basket, then later in wooden or terracotta coffins. These graves contained burials goods like jewellery and sharpened splint.[10]

This demonstrates that this ancient period had a sense of the afterlife, though archaeological evidence may show the average person had little chance of getting into it. This may be because admission required that the deceased must be able to serve a purpose there. The Pharaoh was allowed in because of his role in life, and others needed to have some role there.

Human sacrifices found in early royal tombs reinforce this view. These people were probably meant to serve the pharaoh during his eternal life. Eventually, figurines and wall paintings begin to replace human victims.[11] Some of these figurines may have been created to resemble certain people, so they could follow the Pharaoh after their lives ended.

Note that not only the lower classes had to rely on the Pharaoh’s favour, but also the noble classes. They believed that when he died, the pharaoh became a type of god, who could bestow upon certain individuals the ability to have an afterlife. This belief existed from the pre-dynastic period through the Old Kingdom.

Though many spells from the predeceasing texts were carried over, the new coffin texts also had additional new spells added, along with slight changes made to make this new funerary text more relatable to the nobility.[4] In the First Intermediate Period, however, the importance of the pharaoh declined. Funerary texts, previously restricted to royal use, became more widely available. The pharaoh was no longer a god-king in the sense that only he was allowed in the next life due to his status here, now he was merely the ruler of the population who upon his death would be leveled down towards the plane of the mortals.[12]