Los Angeles Airways Flight 417 was a helicopter that crashed on August 14, 1968 in the city of Compton, California. All eighteen passengers and three crewmembers were fatally injured. The aircraft was destroyed by impact and fire. According to the National Transportation Safety Board the probable cause of the accident was fatigue failure. The accident happened when the yellow blade, one of five main rotor blades, separated at the spindle which attached the blade to the rotor head. Following failure, the helicopter was uncontrollable and it fell to the ground. The fatigue crack originated in an area of substandard hardness and inadequate shot peening. [1]

Los Angeles Airways (LAA) Flight 417 was a regularly scheduled passenger flight from Los Angeles International Airport to the Disneyland Heliport in Anaheim, California. The aircraft and crew had completed three round trips to various destinations in the Greater Los Angeles Metropolitan Area beginning at 0607 PDT and departed the ramp at Los Angeles for Flight 417 at 1026. The flight, operating under Visual Flight Rules was cleared by Los Angeles Helicopter Control to take off and proceed eastbound at 10:28:15. At 10:29:30 the flight reported to Hawthorne Tower that it was departing Los Angeles eastbound along Imperial Highway at 1,200 feet (370 m). At 10:32:55 Helicopter Control advised, "L.A. four seventeen, seven miles east, radar service terminated." The flight acknowledged, "Four seventeen thank you." This was the last known radio contact with the flight. [1]

Statements were obtained from 91 witnesses. A consensus of their observations indicates that the helicopter was proceeding along a normal flightpath when a loud noise or unusual sound was heard. A main rotor blade was either observed to separate or was seen separated in the vicinity of the main rotor disc. As the helicopter fell in variously described gyrations, the tail cone either folded or separated. In order to establish an approximate altitude for the flight, several simulated flights were conducted in a similar helicopter. Most witnesses indicated the flights at 1,200 feet (370 m) to 1,500 feet (460 m) appeared to be most accurate. [1]

The aircraft crashed in Lueders Park in Compton, a recreational park located in a residential area bordering Rosecrans Avenue. The entire fuselage, both engines, main rotor head assembly, four main rotor blades, and the pylon assembly were located in the main impact area. The fifth main rotor blade (yellow) including the sleeve and part of spindle, was located approximately .25 miles (0.40 km) north west of the main wreckage site. Minor parts associated with this rotor blade were scattered over a three-block area northwest of the park. Examination of the yellow blade spindle (S/N AJ19) revealed a fatigue fracture in the shank of the spindle adjacent to the shoulder in the inboard end of the shank. [1] 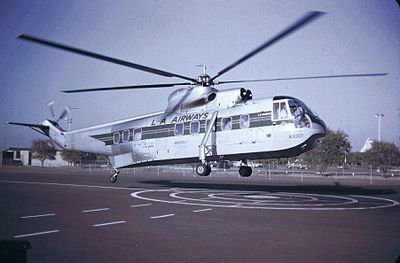 In the course of the investigation by the NTSB they made the following findings: [1]

The National Transportation Safety Board determined the probable cause of the accident as the fatigue failure of the yellow main rotor blade spindle, causing separation of the blade which made the aircraft uncontrollable. The fatigue crack originated in an area of substandard hardness and inadequate shot peening. [1]

Following the initial evidence of a metal fatigue type failure, the National Transportation Safety Board recommended on August 16, 1968 to the Federal Aviation Administration:[1]

Based on its preliminary findings in the Compton crash investigation, the Safety Board today is recommending to the Federal Aviation Administrator that he (1) require an immediate fleet inspection of all Sikorsky S-61 helicopter spindle units; (2) adopt a more precise and frequent inspection to preclude future spindle unit failures; and (3) study the need for establishing a retirement life for this vital part.

On the same date the FAA issued Emergency Airworthiness Directive 68-19-07. The directive has since been amended twice and now requires the following action: [2]

(a) Before further flight, remove main rotor blade spindles P/Ns S6110-23325-1, S6110-23325-2, and S6112-23025-1 that either have been "salvaged" in accordance with procedures set forth in paragraph entitled "Salvage of Spindle" contained in Sikorsky Aircraft Overhaul Manual for the pertinent helicopter model, or have accumulated 3000 or more hours' time in service on the effective date of this AD, and replace with blade spindles of the same part number that have not been "salvaged" and that have less than 3000 hours' time in service.

Among the victims was passenger Christopher L. Belinn, the 13-year-old grandson of Clarence M. Belinn, the founder and president of Los Angeles Airways.[3]