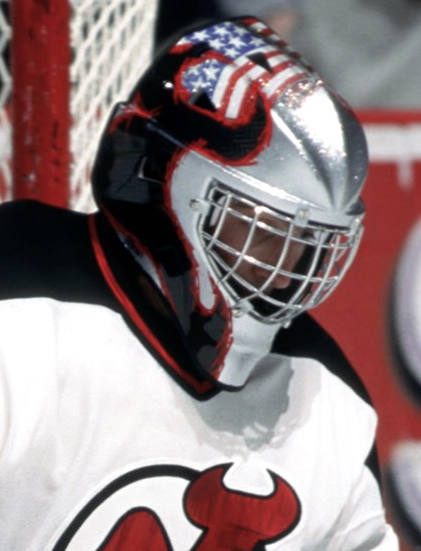 Vanbiesbrouck is known for his consistency in winning, although often falling barely short of the traditional benchmarks synonymous with greatness. During his career, Vanbiesbrouck compiled a record of 374 wins, 346 losses, 119 ties, and 40 shutouts. He is considered one of the best American goaltenders in the history of hockey. He won the in , was selected to the in 1986, , , and , played in the , , , and , along with the 1987 and s, was selected for the 1996 which was won by the Americans, twice went to the Finals in 1996, and , and was the back-up goaltender for the United States in the in Nagano.

John Vanbiesbrouck grew up in Detroit. His father was a Belgian immigrant and his mother was of Italian descent. He was unclaimed in the Midget Draft as a 15 year old, so his father drove him to Sault Ste. Marie, Ontario, to try out with the Greyhounds of the Ontario Hockey League. Vanbiesbrouck made the team, and for three years he was the number one goalie in the Soo. By the time he was eligible for the NHL Entry Draft, there was no doubt that he would be selected. In 1981 the Rangers chose him in the 4th round (72nd overall), and just a few months later he made his professional debut with the Blueshirts as an emergency call-up.

On , , he beat the Colorado Rockies 2–1, at 18 years of age. The Rangers then returned him to the Soo to develop. For two years he played goal for the United States at the World Championships, and in the CHL. In 1982, he won the Terry Sawchuk Award (with Ron Scott) for Best Goalie. The following year in 1983, he was awarded the Ivan Trophy as the CHL’s Most Valuable Player. In the fall of 1984 he made the Rangers full time. But the New Yorkers were eliminated quickly from the playoffs in the spring of 1985, and Vanbiesbrouck gladly accepted an invitation to represent the U.S. team at the World Championships in Prague. In 1986, he had his first 30 win season, where he finished the year netting 31 victories for New York.

He stayed the Rangers' number one goalie until arrived on Broadway and established himself as an equal but younger talent. The two became one of the best duos in the game, but Beezer was left exposed in the Expansion Draft in 1993 by Vancouver after the Rangers had traded him to the Canucks for future considerations (). Because of this, he would miss the Rangers' 1994 and winning year.

However, his career exploded during his years with the Panthers. During the 1994 season, John played in nearly 60 games, and ended the year with the 2nd best save percentage in the league. The following year, Vanbiesbrouck played a key role in Florida staying in the playoff hunt until the end of the 1994–1995 season. He recorded 33 victories and his performance earned him the to the and . In 1996, he backstopped the Panthers to the first, and only, Finals appearance in franchise history, upsetting the , , and before losing in a four game sweep to the . He finished third in voting for the as playoff MVP.

In 1997, Vanbiesbrouck recorded his 300th career victory, and tied his career high for longest undefeated streak at nine games. However, a long Panthers losing streak caused him to be booed off the ice later in the 1997–1998 season.

Before the start of the 1998–1999 season, Vanbiesbrouck signed with the Philadelphia Flyers. His first season with Philadelphia was very successful. He posted a 2.18 GAA, and notched 6 shutouts before rotating the starting goaltending job with and then .

On Draft Day in 2000, John was traded to the , who brought him aboard to groom rookie netminder . But he didn't finish the season with the Islanders. In March, he was traded to the for , where he became the backup netminder for . He recorded his 40th shutout, and won every game he appeared in with New Jersey. During the 2000–01 season, the Devils advanced to the Stanley Cup Finals for the second year in a row. This was Vanbiesbrouck's second trip to the finals, though he played only a total of four minutes this time. The Devils played the and lost in seven games. Vanbiesbrouck promptly retired on , after the game had ended. John could not stay away from hockey long. On , , he agreed to terms with the Devils to come out of retirement. He was the back-up for the rest of the season, and then retired for good from professional hockey on , .

Internationally, he played in the 1982, 1983, 1985, and 1989 World Championships. He participated in both the 1987 and 1991 Canada Cups for the U.S. team. Although he didn't play in the inaugural 1996 World Cup due to shoulder surgery, it should be noted that he was selected as one of the goaltenders for the U.S. team. He teamed again with Mike Richter at the Nagano Olympics in in 1998 when the NHL shut down to allow all its pros to participate. However, the U.S. sixth-place finish was considered a disappointment. On , Vanbiesbrouck was inducted into the along with , Bobby Carpenter and Michigan Tech NCAA Coach . He currently resides in with his family, and is an analyst for as well as hockey broadcasts on . He has two charities he participates in, The , and The ADD Foundation he started for Attention Deficit Disorder.

When he retired from the NHL, he took the position of , and of the . There, he admitted he used a racial slur to describe a black player, Greyhounds captain (now plays with the ). Daley quit the team and returned home to Toronto after being told that Vanbiesbrouck used the slur while talking to other players. Vanbiesbrouck apologized and resigned his positions as coach and general manager, saying that he would sell his 25% ownership stake in the team immediately.