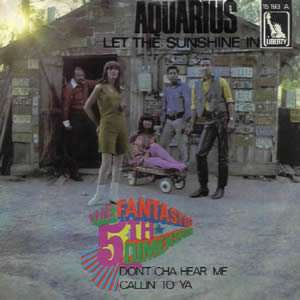 "Aquarius/Let the Sunshine In", sometimes incorrectly known as "The Age of Aquarius" or "Let the Sunshine In", is a medley of two songs from the musical "Hair" ("Aquarius" and "The Flesh Failures (Let The Sunshine In)") written by , and , and released as a single in 1969 by . The single held the number one position on the U.S. for six weeks and was certified Platinum. [ [http://allmusic.com/html/info_pages/bb_admatch_close.htm AllMusic.com] "The Age of Aquarius" page Accessed: November 26, 2006]

The song listed at #57 on "Billboard's Greatest Songs of all time." [http://www.billboard.com/bbcom/specials/hot100/charts/top100-titles-60.shtml]

The recording won the and Best Contemporary Vocal Performance by a Group at the , after it was released on the album "The Age of Aquarius".

The song was based on the astrological belief that the world would be entering the Age of Aquarius, an age of love, light and humanity, unlike the then current . This change was presumed to occur at the end of the 20th century.

"Aquarius/Let the Sunshine In" was ranked thirty-third on the 2004 . 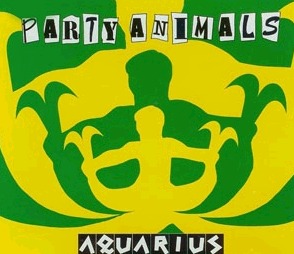 Artist = Party Animals
Released =
Genre = ,
Length =
Producer =
Label =
Last single =
Next single =
* , Greek female singer, covered "Aquarius/Let the sunshine in" at her performance at the Mad Video Music Awards 2007.
* "Pop- Dutch band, the Party Animals covered "Aquarius" on their debut album "Good Vibrations" in 1996. The single was certified Platinum [ [http://www.nvpi.nl/nvpi/pagina.asp?pagkey=60461 NVPI.nl] Certification page. Accessed: November 26, 2006] and peaked at the number one position for three weeks. [Stichting Nederlandse Top 40, "500 Nr. 1 Hits uit de Top 40", page 330, ISBN 9023009444 (Book in Dutch)] .
* "Aquarius/Let the Sunshine In" is performed with dancing at the conclusion of the 2005 movie "" after the lead character's first sexual encounter.
* British comedian also sang it.
* "Aquarius/Let the Sunshine In" is also used in commercials for the .
* The "Aquarius" song is used in commercials for the Aquarius sports drink.
* sang a version of "Aquarius" in a commercial for .
* (brand name, Bic) also used the song in the 2007 advertising campaign for the debut of their "Soleil Triple Blade Razors" in America.
* This song is sampled in the song "Sunshine" on the album "".
* The "Let the Sunshine In" portion of the medley was covered by the band on their 2000 album "Le Grand Docu-Soap."
* The 1999 remake of The Out of Towners used "Aquarius" when 's character has a psychedelic scene after ingesting a hallucinogenic.
* In the (2001) Disney Movie "", "Aquarius/Let the Sunshine In" plays during the end of the movie, moving into the credits with the chorus let the sunshine in.
* recorded a parody entitled "I Think It's Time to Clean My Aquarium".
* , a German dance music production duo, have recorded a chart-topping remake of the "Let the Sunshine In" portion.
* created a version of the song for the opening sequence of .
* The U.K. electronic/ambient artist samples portions of the movie soundtrack version for their own track of the same name as featured on their album "".
* In 2008, used the "Let the Sunshine In" portion in the chorus of his song "Fort Hood" on the album "Golden Delicious".
* The have been known to perform covers of The Flesh Failures (Let the Sunshine In).
* has also recorded the song, as highlighted in his 'Best of . . .' album
* The "Let the Sunshine In" portion of the song was used as one of the official theme songs for the 2008 general election campaign of .
* performed a live on-air semi-cover (involving him adding his own vocals over the original track) on on February 4th, 1990 .