Ein Tzurim (Hebrew: עֵין צוּרִים‎‎, lit. Rocks Spring) is a religious kibbutz in southern Israel. Located south of Kiryat Malakhi, it falls under the jurisdiction of Shafir Regional Council, and is a member of the Religious Kibbutz Movement. In 2007 it had a population of 1,100. 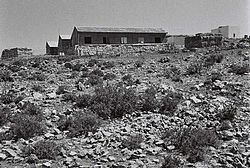 The kibbutz was founded on 23 October 1946 as a new settlement in Gush Etzion (east of the present-day location). Its founders were Palestinian-born members of the fifth group (Gar'in) of Bnei Akiva that had formed in Tirat Zvi.[1]

In 1947, the kibbutz had a population of 80 people. During the 1948 Arab-Israeli war, the kibbutz was destroyed along with all the other settlements in Gush Etzion, by the Jordanian army. The men who stayed there to fight were captured as prisoners of war, and taken to the Mafrak P.O.W. camp.[1]

With the renewal of Jewish settlement in Gush Etzion after the Six-Day War, a new kibbutz called Rosh Tzurim was founded on the original location of Ein Tzurim.

In 1949 the people who left Ein Tzurim founded a new settlement in south-central Israel near the existing settlements of Zerahia, Shafir and Merkaz Shapira, and they named it "Ein Tzurim" as a symbol of continuity.

In the 1980s two major educational centers were built in the area of the kibbutz: Yeshivat Kibbutz HaDati and the Yaakov Herzog center for the study of Judaism. In 2008, the yeshiva closed due to insufficient enrollment. [2] However, every Yom Kippur former students from all over Israel return to pray together.

After the Gaza disengagement in 2005, some evacuees from Gush Katif moved into a trailer park near the kibbutz and plans were drawn up for permanent housing.

The economy is based on fruit orchards, (lemon and persimmon), vegetable crops (artichokes), dairy farming and turkey-breeding. The kibbutz also has an air-conditioner factory and runs a guesthouse.